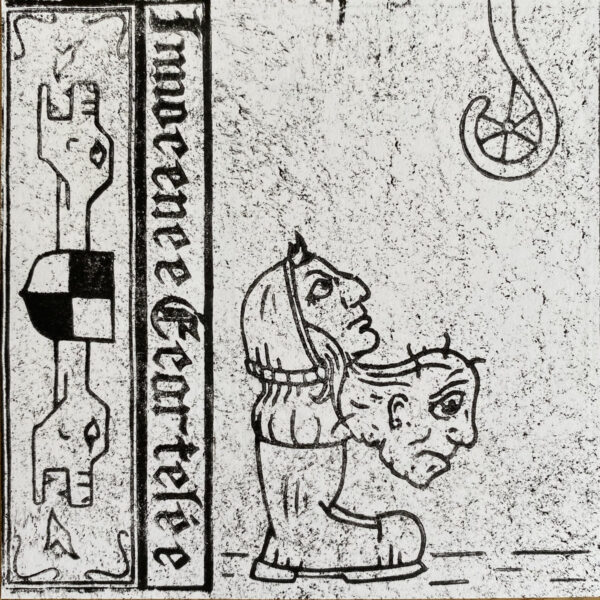 Released by the band itself in a limited edition of 50 tape copies, this self-titled debut is wall-to-wall terrifying blackened noise trance music, scorchingly raw and filled with the uttermost despair and existential torment. The Innocence Écartelée men hail from Paris – WHAT?! another new French black metal band??? – and their Bandcamp page politely warns followers of National Socialist Black Metal and other similarly inclined fascists not to buy any of their product. A warning well worth following as the duo’s music is punishment enough indeed – here is continuous and immersive cacophony in which followers helplessly find themselves drawn to the very Ground Zero centre around which the music churns like burning acid lava corrosion. The guitars are unceasing acid-fuelled fire that never dies out, the drums have a trashy banging sound and the shrieking ghost voices, far back in the mix, are filled with the pain and suffering of being in an eternal hell.

Being on tape, a format notoriously hissy if the recording is played at near-maximum volume, this work sounds very lo-fi primitive and scourging. In spite of the constant seething, frying-egg noise static, most instruments do come out of the murk clearly though the sound may be uneven. The songs are riff-based and some riffs are not only clear but are even on the catchy if morose side, as on “Justice immanente”. The drumming can be very good so it’s a pity the general sound is not better. As the recording continues, the bleak emotions and the sense of sheer desperation become more prominent in the screaming, the repeating riff loops and the increasing urgency and desperation in songs as they play.

This noisy affair would be hard to listen to even on a better medium with a more pristine sound quality. While the Innocence Écartelée duo, known only as HR and MG, offer nothing not already done in raw depressive BM, their approach emphasises the overwhelming nature and intensity of the phenomenon of depression. Yes, the music is repetitive, dreary and monotonous – it has all the characteristics of depression, a state most of us if not all of us enter into at some time in our lives. Even so, there is scope for experimentation in Innocence Écartelée’s style: the duo is already halfway towards an unstructured and organic style of BM in developing an immersive dark music in which emotion is carried by severely abrasive guitar tones and background ghost voices create depth and atmosphere.