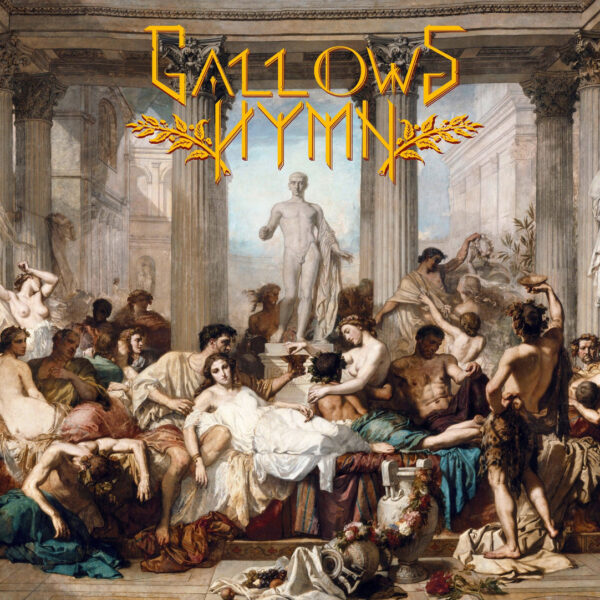 By the time Gallows Hymn released “The Age of Decadence”, their second album, the band had already been whittled down to a duo after the departure of George Miller, who sings lead vocals and plays bass on the recording, and who also contributed lyrics to three songs (“Into Woven Wilds” and the Draculestei tracks). The album follows on from “The Gathering Storm” in style and themes, with the music becoming more technical melodic death metal and less black metal, and featuring strong folk and progressive rock tendencies.

“The Age …” expresses GH’s interest in European and Middle Eastern history and mythology, and the arts, literature and drama inspired by such history and myths, as demonstrated by their choice of nineteenth-century French artist Thomas Couture’s famous painting “Les Romains de la décadence / The Romans in their Decadence” (completed in 1847) for the album’s front-cover art. Comparing GH with Couture might be more apt than we realise: in his painting Couture was not only criticising the Roman Empire’s decline and the causes of that decline but also what he saw to be the political and cultural decline of France at the time. (The year after Couture completed his painting, the Bourbon monarchy fell and was replaced by the Second Republic.) It’s quite possible that in their own way GH are criticising what they see in current American and European politics and culture; certainly the lyrics, in their use of first-person and second-person points of view, have an accusatory tone, and the songs are arranged in such a way that the entire album could serve as a blueprint for a future opera or movie soundtrack. Tales of invasion, raids and pillage, wars of conquest, appeals to distant gods, the division of the world into rival empires … while all of these are drawn from GH’s own forays into history books, these also have modern parallels in First World nations and corporations’ invasions and raids on the lands and resources of Third World nations, the rise of populist politicians and charismatic leaders and the current division of the world into rival trade blocs.

From the moment the album opens with the title track, listeners are treated to epic dense melodic DM reliant on powerful machine-gun beats and rhythms powering guitar melodies and stuttering riffs full of crunch that would be more memorable if each and every song weren’t so jam-packed full of these melodies and riffs plus other things like chanting choirs and the occasional clean-voiced vocals. Folk melodies have a Middle Eastern flavour and compete with declamatory gravel-guttural vocals for attention. The music is thick with an almost sickly, lavish and decadent tone that contrasts with and enhances the oppressive power of the mechanical blast-beat rhythm structures. Admittedly the music can be heavy going and by the end of the fourth track and visions of Christian crusaders riding through crowds of people in the Holy Land and cutting them all down, on the assumption that God will know His own, we are more than ready for “Intermission” – except even here, the relief track offers no respite from the cultural decline and decay with an atmosphere of excess, boredom and fatigue.

Returning to the rest of the album, listeners won’t find a great deal different from the first half of the album with the vocals still fighting the rest of the music for attention and the near-industrial rhythms punishing and pushing the music onward. The lyrics take on a more personal nature and the emotions and visions they evoke are less historically specific, though the Draculestei tracks clearly reference the legend of Dracula and the real Romanian ruler (Vlad Tepes) who inspired that figure.

The album can be demanding on the listener’s time and patience, with its references to the history of religious wars and crusades, and a particular interpretation of the legend of Dracula that seems inspired by the Francis Ford Coppola film “Dracula” in which Dracula, having been damned to be undead for renouncing God, pursues his lost bride for centuries. Heavy on lyrics and a musical style that is consistent if narrow in its range of instruments, sounds and structures, the songs present a stupendous and forbidding front. If a film were to be based on these songs, it would have to be as epic and monumental in scale as the music. It’s to GH’s credit that they pull off such an epic and bombastic work, with all the lurid decadence it captures, without sounding too theatrical and histrionic or going all emotional and sentimental. Sticking to the core set-up of vocals, guitars and drums, even at the risk of sounding monotonous, helps the band keep its balance between drama and melodrama.

This album could be GH’s break-out work but having lost a member, GH might very well reconsider continuing with its current musical direction and themes, and strike a new path as a duo or with a new member (or members). Any further development of the themes on “The Age …” runs a risk of over-refinement and the kind of excess and decline that comes from over-doing or over-exaggerating those qualities or ideas that initially were fresh, inspiring and full of vitality. This is the decline that Couture was referencing in his famous painting.