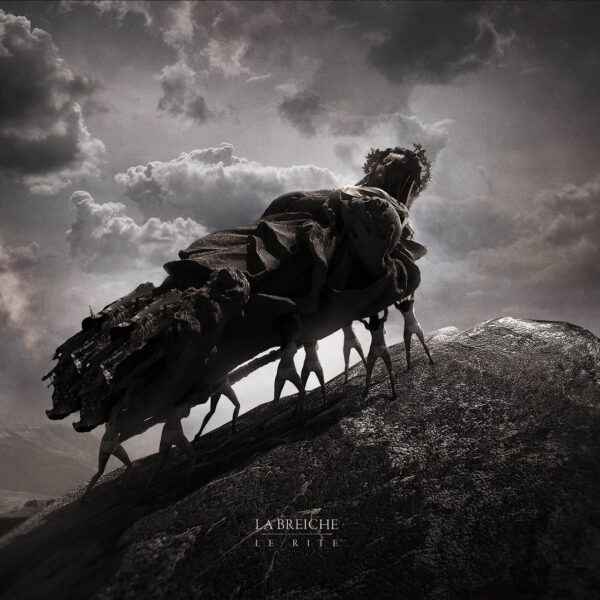 A remarkable recording indeed, influenced by and/or featuring elements from black metal, traditional folk, post-folk, dark ambient, post-rock, electro-acoustic folk and even a bit of jazz and progressive rock, and sounding nothing and everything like all of these genres and styles, “Le Rite” is the second album for French duo La Breiche. La Breiche’s multi-instrumentalist members Yan Arexis and Patrick Lafforgue also work together with another musician in Toulouse-based pagan black metal act Sus Scrofa. As its name suggests, “Le Rite” revolves around a theme of rituals and what they may say about the people or communities that perform them, what their nature and performance give away about the performers’ belief systems, knowledge, history and culture. We may not necessarily come away with a better understanding of what needs and yearnings ritual may fulfil in the lives of communities and societies from this recording but we certainly catch some idea of how deep and nuanced, how strange, even how unearthly and mind-expanding (even mind-blowing) ritual can be just through its performance, and the repetition of its performance.

Opening track “Incipit” might be a slow, cautious starter but it gives listeners space and time to accustom themselves to the strange universe they have just entered. It has a dark, intimate feel and some listeners might even think they’ve stumbled into an odd jazz club that admits only a very small bohemian clientele. But then the title track follows and it’s a gateway into another world altogether: the music sounds mediaeval and pagan, and its solemnity and repetition, along with the chanting and singing, are suggestive of an old Christian ritual whose pagan origins have been long forgotten. Each track has a definite atmosphere: skies suddenly seem cold and grey, a cold wind might be blowing, the mood among hooded singers trudging through abandoned fields is sombre and fatalistic. Instruments associated with old folk music traditions are used in ways (and in combination with electronics and more recent instruments) that not only infuse them with a new life and vigour but enables them to give the music their own distinct character. (Although background analogue synth wash still sounds crappy no matter how much even La Breiche try to gild it.) As the album continues and the music starts to become a bit more familiar with actual electric guitar melodies and drums entering the scenery, some very beautiful and wistful songs arise, with “Senta Méra” a piercingly bleak and poignant highlight.

The music is put together with care and precision, and most songs have a fragile beauty and grace even – nay, especially – when their sounds are layered, with percussion, keyboards, effects, voice and ambience all combined into one clear and sharply crystalline whole. On all songs nothing is out of place and even the smallest, most feather-light insubstantial detail is a major building block that enhances the structure and atmosphere of the song it appears in. Together all twelve tracks combine to create and sustain a unique and immersive universe that appears to have always existed in its present form, at once ancient and unchanging, and yet very much current and speaking directly to us listeners in structures familiar to us from contemporary music genres. This paradox is behind the album’s mystery, that it seems so alien initially and yet not really so odd after all once you have heard it a few times.

This work definitely deserves to be considered one of the best experimental albums of 2020.