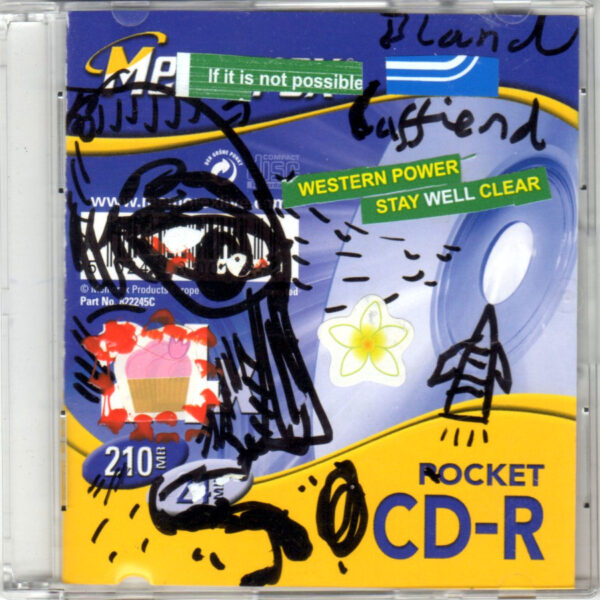 Another curious item arrived from TapeNoise in March 2019…we have given sporadic attention to the weird packages from this UK mystery fellow, which I see have been arriving since 2012. Used to be he would send cassette tapes, and on one occasion presented an entire pseudo-thesis on the meaning and culture of the cassette tape in today’s society, which may have been intended as tongue-in-cheek or a subversive joke about art criticism. It’s never easy to tell what TapeNoise actually intends, as his work obtusely refuses to communicate successfully on any level. However, we were recently turned a few degrees to the west, opinion-wise, by the Weird Harvest collection that not only had some good music on it, but also provided evidence of the lively arts community he cultivates in his Hullovian part of the woods, so for this reason we decided to clear our ear trumpets for a better listen.

This time it’s not a cassette tape, but a 3-inch CDR on which appear 14 untitled tracks; if there is an overall title to the work, good luck finding it in amongst the scrawls, doodles and stickers which TapeNoise has plastered all over the package. When I say “refuses to communicate”, another way to see it might be that he communicates too much, supplying numerous oblique clues in the form of texts, puns, and chopped-up words, not to mention the xeroxed inserts of typed words overlaid with found images, all of which evidently add some extra layer to the unfathomable plan. Perhaps he’s taking a leaf from Mark E. Smith’s book; I’m sure there are Fall scholars who are still puzzling out the texts written on the album cover of Hex Enduction Hour, for instance. I like the way TapeNoise has detourned the Memorex CDR package with his interventions, and the miniature eight-page “book” inside is a delight, even if totally incomprehensible. As to the sounds on the disc, these are equally baffling; some tracks may have been made with synths and lo-fi electronics, but it’s all been presented in a very alienating manner: no clear beginnings or ends, rather “distant” and cold sounds as if we’re hearing the equipment in a badly-lit sports hall three doors away. It refuses normal listening pleasure, but it isn’t outright “noise” either, in the sense of harsh and abrasive blastage. One cut which stands out from this is not music at all, but a recit of street poetry themed on drinking coffee (a theme vaguely alluded to on the cover artworks, with its references to the “caffiend” who appears to be a coffee addict). Here, TapeNoise not only manages to undermine something as banal as “going for a coffee” but also turns it into an excuse to sneer at the smug bourgeoisie (something he evidently regards as his mission in life).

Arrived in a decorated and personalised envelope to boot; finding this one less repellent than usual, and strangely affecting in places, but I’m still a long way from cracking the TapeNoise code. If you want a copy, try the website; there’s plenty more examples and excerpts available at that online den. From 4th March 2019.