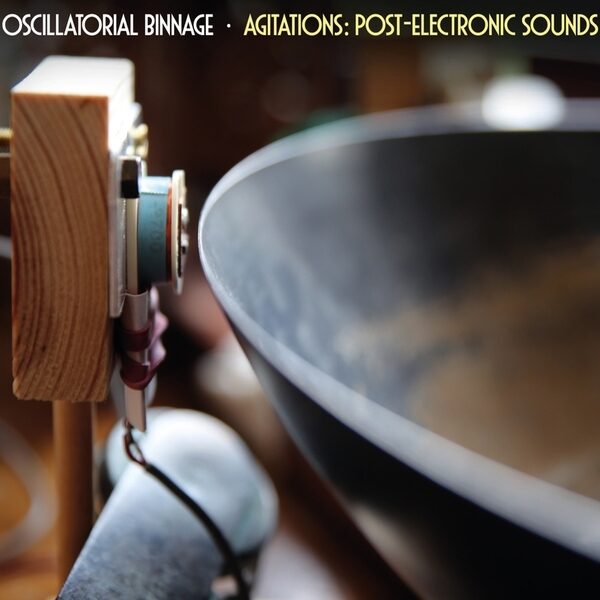 Last heard from Daniel Wilson, the unclassifiable English singer-songwriter, when he sent us two LPs released under his Meadow House guise and we wrote about them in 2018 (here and here). These were both primo examples of ramshackle raw-nerve music, the singer baring his soul (and more) in ways which few people dare to do in art, often with quite harrowing results; his very plaintive singing voice carried a lot of emotion on those records, as they rubbed full sore the psychic wounds he bears. On the other hand, there was considerable invention in the eccentric production and the sound of those LPs too, which make them still worthy of your investigation.

Today though, here’s something entirely different – it’s the four-piece combo Oscillatorial Binnage, with a record of acoustic drones called Agitations: Post-Electronic Sounds (SUB ROSA SR495). Besides Wilson, the other three players are notable musicians and technicians, i.e. Fari Bradley and Chris Weaver (both long associated with the art radio station Resonance FM) and Toby Clarkson. Oscillatorial Binnage have indeed appeared on Resonance FM more than once since 2013 (or maybe earlier), and have given concerts-cum-workshops at Cafe Oto, cementing their reputation as faves on the London avant stage. I think this is the first full-length record credited to the Oscs, although they have contributed compilation tracks to various projects in the past, for instance the CD The Art Of The Gremlin: Inventive Musicians, Curious Devices which came out on the Electronic Music Foundation label in 2007, where they were in the company of other similar luminaries who have manipulated objects to produce their sound, such as Rhodri Davies, Knut Aufermann (another skilled Resonance producer), and Toshimaru Nakamura.

The work of the Binsters is quite unique in that it’s not electronic music, and everything we hear was recorded acoustically. They do it with found objects (mostly metal) and magnets; the magnets create “force fields” which cause the objects to resonate. There’s also an elaborate system of cranks and gears involved to help the foursome do their manipulations, and you can get some idea of what’s involved by scoping the overhead photo of the happy team at work; there they are seated around a large table covered with clutter, as if sitting down at a family meal. One can’t help but think of food when one sees so many woks and metal pans in view. I suppose the cranks and gears are their equivalent of faders on a mixing desk, and the fact that it’s all done by Newtonian physics adds a very human dimension to the project. Besides the unusual method, which is something I’m fairly certain that Chris Cutler or Keith Rowe (for instance) would recognise and approve, one key factor is the interaction of these four pairs of hands. Apparently it’s a delicate, nuanced business; one false move could upset the delicate balance, and to produce the “evolving drones” and exploit the “chance effects” correctly requires a lightness of touch and a real craft among the team.

This may or may not be one of the reasons why Wilson reports that “it was quite an upheaval to get it recorded”, although he may be referring to other hurdles. I mentioned about the workshops; the Oscs see it as part of their mission to educate us about their work, and perhaps it’s true that a performance may be as much a demonstration as it is a musical experience (though I’ve never seen it); to this end, we have pages of detailed notes in the booklet, describing how “continual permutation of the physical variables steers the network of vibratory interactions”, and they are keen to stress the pre-electronic side of their work, finding antecedents in certain late Victorian inventions. However, Daniel Wilson’s enclosed letter tells another side to the story. He rummages in bins like a badger, and is not ashamed to admit it; most of the objects on this record which make a noise were personally retrieved by his hands from skips, bins, and dumpsters. He often got in trouble doing this, and ended up with “soiled fingers”, but it’s a habit that dies hard. There was a time in his life, he confesses, when he had to steal food from bins just to stay alive. This is why I mentioned the “sitting down at a meal” thing; it’s an image which carries extra poignancy in the context of the life and personal history of Daniel Wilson.

I enjoyed this record, and am impressed by the amount of variety and texture it’s possible to extract from this largely non-musical set-up, although the differences from one track to the next are rather subtle. At times I also wondered why it takes four people to produce this; they don’t seem, like AMM or MEV for instance, to be especially interested in bringing out distinct musical “voices” in their ensemble, and instead the idea seems to be a collaborative merging, largely personality-free, producing these low-key very mesmerising drones. From February 2020.