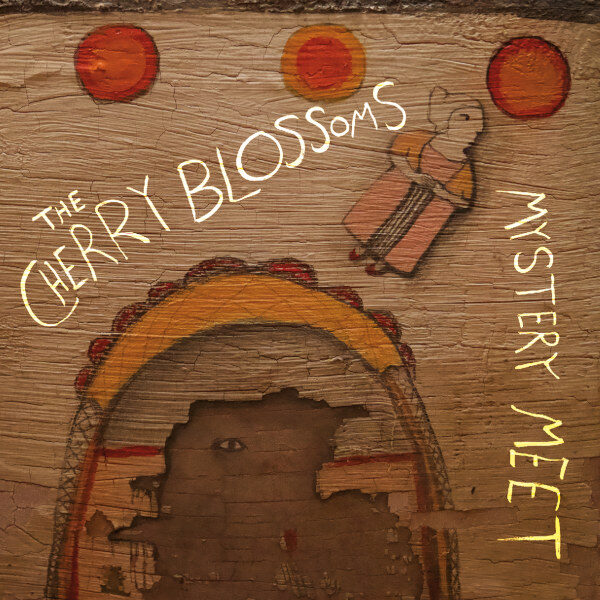 From Nashville TN we have The Cherry Blossoms, an American acoustic collective who may have been active since 2000, even though they don’t have that many records out and their earliest known release is from 2007. Matter of fact today’s LP, Mystery Meet (FEEDING TUBE RECORDS FTR511) is a vinyl edition of that very record, a 2007 CDR originally called Josephine Foster & The Cherry Blossoms, from when a seven-piece version of the band toured with Josephine Foster. We did hear this very distinctive American vocalist in 2008 when she had a domestic release (via Bo Weavil) of her 2008 solo LP, This Coming Gladness.

For this vinyl edition, the original 13 cuts have been edited down to ten tracks, and placed in a different order. The cover art has been tweaked a bit too, but still retains that hand-crafted rustic wooden “outsider” charm I assume the Blossoms were aiming for. You’ll find that same charm in the wispy, creaky acoustic music on offer in the grooves; The Cherry Blossoms excel at playing the kind of discursive, free-form and slightly balmy music that I also associate with Wooden Wand, Matt Valentine, Tower Recordings and Clay Ruby’s Davenport. This tendency is perhaps best manifested on tracks like the 9:20 ‘Shimey Chuck Down’, where the collected voices and instruments quickly slip into a ramshackle trance state full of gentle chanted repetitions and primitive strumming motifs. Plenty of other songs demonstrate how well the combo have mastered a certain form of diffuse, porous way of performing; there may not be much “structure”, but it’s not needed, and instead we have an all-inclusive welcoming musical space, where there’s plenty of room for the listener to feel right at home.

So far, lots of stuff to like – indigenous folk forms (including country blues) melded into a contemporary mindset that happens to have a few ESP-Disk records tucked away in the loft, especially the ones by Erica Pomerance and Mij. But there’s also a song called ‘Shaker Dance Of Incarnation’ (simply called ‘Shaker Tune’ on the original 2007 release) which was apparently written by Foster, even though it projects such an aura of all-American authenticity you’d be forgiven for thinking it had 19th-century origins. The interest in Shaker culture might have been relatively new when they recorded this, although it didn’t take long for the yuppies to step in and start paying exorbitant prices for Shaker furniture. I mention this as there’s a vaguely religious bent to the whole of Mystery Meet, even if it remains largely non-specific and settles for a miasma of come-all-ye sentiments and revivalist vibes, as of evangelist songs sung around a campfire. Non-specific, I claim, mainly because there are few discernible lyrics and words we can follow and most of the emotion is conveyed in wordless fashion. No matter, as the singing voices are beautiful and limpid (in the best untutored manner, of course).

A beguiling record – The Cherry Blossoms feel very genuine to me and there’s nothing overly contrived about this rich mix of folk, roots, gospel and psychedelic strains. They obviously enjoy what they’re doing and this comes across one the grooves, and even on their website where the “family albums” of photographs are evidently more important to them than printing scads of self-promotional hype. Byron Coley also hears elements of Michael Hurley and the Pindar Family in their warm music. Arrived 9th March 2020.