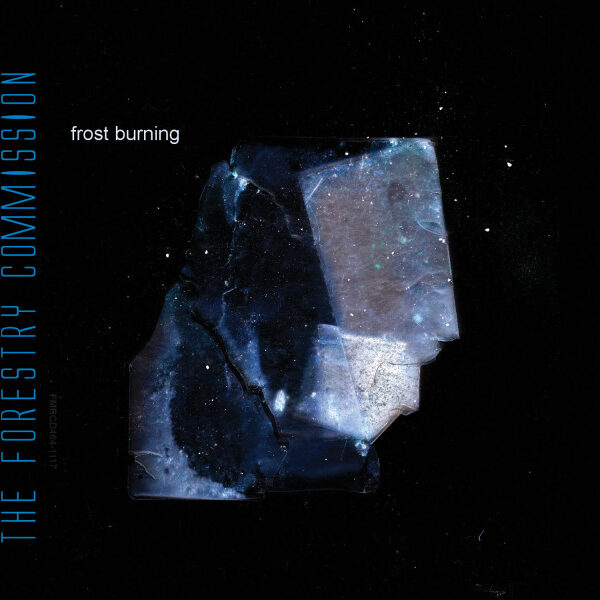 Got a couple of recent-ish records from Biliana Voutchkova, the Berlin-based violin player. We have been hearing her sporadically since around 2013, often in small group improvising contexts, but it was her solo record Modus Of Raw that really “cut through” for this listener, which is my way of saying how much I liked it. With that 2016 item, she seemed to be voluntarily entering a private, enclosed space where she could develop and preach her own private musical language. As ever with these things, I like it when there are very insistent repetitions, which in this case seemed to be evidence of Voutchkova worrying away at each musical bone until she sucked the marrow from its pith. In terms of technique, she’s flawless, bold, and highly inventive, freely exploring the edges of classical music and free improvisation.

Today’s record is credited to The Forestry Commission, and it’s called Frost Burning (FMR RECORDS FMRCD470-0318), and it’s played by the trio of Voutchkova, Alexander Frangenheim (double bass) and Antonis Anissegos (piano). Seven pieces, recorded in a Berlin studio in 2016. Antonis Anissegos is something of a hidden gem; he was mentioned in passing in Stuart’s review of the Spyros Polychronopoulos record, as he has collaborated with his fellow Greek musician on the work Piano Acts, but I think this is the first time I’ve heard his nimble digits on the Bechstein, and he’s very good. In music dominated by two occasionally hyped-up and fast-sawing string players, Antonis Anissegos finds a way to insert calm and thoughtful notes with remarkable presence; his work has a certain grandeur, while remaining unobtrusive. In his charmingly minimal way, he creates tiny counter-melodies to the main string-based events. I noted this particularly on the second track here. I see from his small discography he’s also “done” John Cage and Morton Feldman in recent recordings for Wergo. Anissegos is sometimes labelled a jazz musician, yet here he is playing classical avant-garde and producing this severe free improv too.

Frangenheim is easier to locate in a free-improv context and has made a number of collaborative records for Creative Sources with his bass, although I first heard him in the mid-1990s on a record called Twisters, with Steve Noble and Tony Bevan (from a time when it looked like English jazz was going to explode in a new blast of creativity). What I’m digging on today’s spin is Frangenheim’s rather melancholy caste, his cold and mournful playing, bass creaks emerging like long sighs from a despairing breast. There’s also much pleasure in his non-musical slidings and stabbings, where sound production is given higher priority than musical notes.

As to Biliana Voutchkova, her playing is pretty stellar throughout; it would probably be gauche to think she’s the “leader” here, and sounds are shared out evenly in each performance in very democratic fashion, but I like to think she is strongly indicating the direction of travel every time, suggesting byways to explore. If there’s an overall style in play, I guess it’s fairly “pointilliste” in nature, lots of small and hard sounds played with needlepoint accuracy. Her playing is so vivid that you can almost see every gesture as the record unfolds, which isn’t to say she’s fiddling with the manic tension of a possessed demon on every track. If I’m feeling a sense of “urgency” on most of these cuts, it’s not due to the pace of the playing, but emerging from some deeper psychological zone. If there really is “frost burning” – a metaphor for some unknowable mental state, I expect – then we don’t have much time before it’s too late. Within each piece, lasting around 5-7 mins on average, the players pack a large amount of musical information, and although it’s quite complex and daunting at first, it’s not an insuperable problem to start decoding it. The Forestry Commission produce such a rich blanket of sound that there’s not a “dead” moment on the whole record.

Tension, detail and complexity; quite the contrast so far to the many small-and-still voiced minimal improvisation works which continue to prevail. Released at the end of 2018, arrived here 21st August 2019.