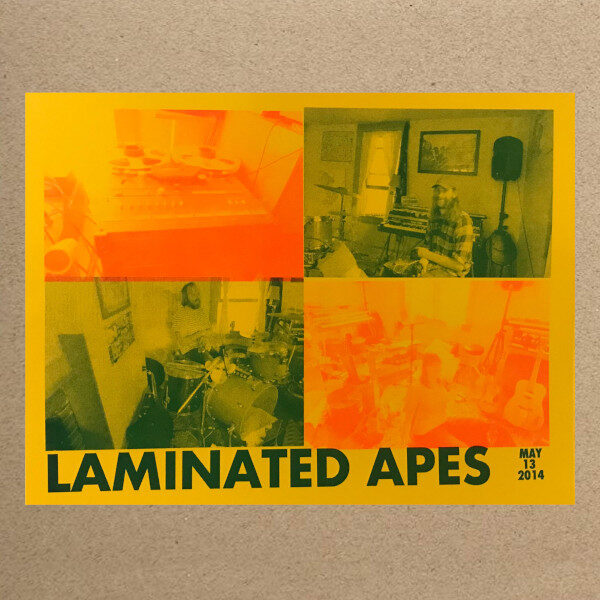 Hugely enjoyable record of nebulous low-key noise from Laminated Apes – this lot appear to be based in Massachusetts and are one of these “collective” improvisation phenomena who have been thriving in the USA since the 1990s (if not before), in far-out combos such as Frank-O-Fest, Valley Of Ashes, and Fuzzhead. Laminated Apes were an eight-piece at time of making this record and included Ted Lee among their ranks, the co-owner of Feeding Tube Records who released a few Apes tapes since 2012, one of them a split with the ubiquitous (and far more noisy and unkempt ) Egg, Eggs.

On the LP May 13th 2014 (FEEDING TUBE RECORDS FTR526) we kick off with an untitled sprawl which lasts 24:15 and indicates that the band like to get straight into the “zone” and stay there – and by zone, I mean a place of foggy drone and mysterious drifting sounds whose exact origin is far from clear. Maybe humming voices, maybe samples from records, maybe electric guitars playing a very stoned form of psychedelic rock. maybe other instruments; the important thing is the strong blending of several elements to produce a strangely harmonious whole. No real form, no rhythms, no pulses, but an enchanting haze of vapourous proportions emerges, in a form so gaseous you could inhale it in both lungs and then exhale over Cape Cod, creating unexpected weather conditions. On the flip, we open up with another untitled blaggeroo lasting 10:01 and making use of radio samples along with the improvised noise, such that for a few moments one is tempted to draw comparisons with Keith Rowe’s transistor radio for early AMM performances. Here the results are less of a universal cosmic mind vibe thing, and I’m digging the individual instrumental contributions which do stand out, though are so heavily disguised (mostly by echo units, methinks) that it’s not clear how made, be they by guitars, synths, or home-made electronic gadgets. Again, though mysterious and shrouded in odderment, I’m not feeling too threatened by this ghostly waftage and indeed I’m sure there’s a corner in this crazy house with its skewed floorboards and taped-over windows where a gentle soul can curl up and feel welcome.

Final cut comes in at 9:46 and, in the present company, seems more “conventional” than its brothers, unless I’m starting to grow accustomed to the strange formulations of these sonic witches and warlocks. It’s an intriguing gumbo though, and I like the muttered distorto-voices (if that’s what they are) chuntering in the background, and there’s some good violin scraping too. Members of the Apes include: Shannon Ketch of Bunwinkies, who has also performed with Sunburned Hand of the Man; Olivia Kennett of Curse Purse and Egg, Eggs; Jenifer Gelineau, who played with Ted Lee in Donkey No No; Andy Goulet of Salvation Alley String Band; plus Greg Tessier, Jim Bliss, and Bob Fay. Ted Lee’s appearances in these pages have ranged from the highly listenable (Donkey No No) to the unfathomably odd (No Sod), and this particular shimmering manifestation of his is highly welcome. Individually or collectively, these musicians have released a lot of records over the last 10-15 years, even if most of them are limited-run cassette tapes…I think even this release might be a limited (40 copies) lathe cut. Good luck keeping up with all this rich cultural activity, especially if you don’t live in Massachusetts. From 17th March 2020.