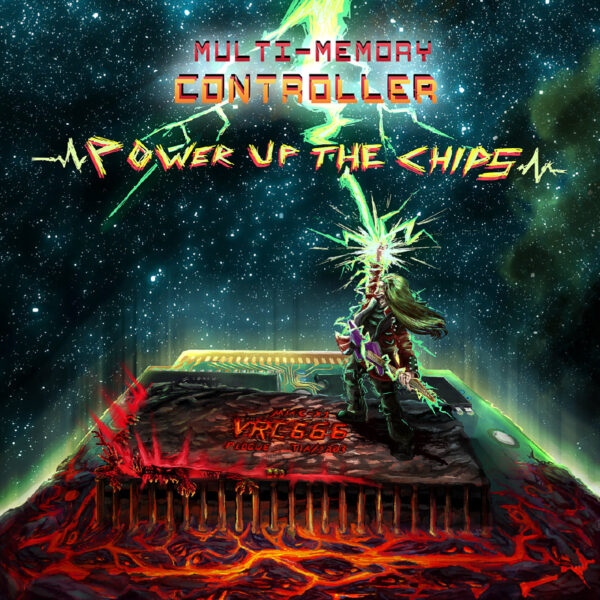 This is the first time I’ve come across a solo heavy metal project that’s also a university academic’s music research project exploring and expanding the aesthetic, historical and cultural links between metal and video games. Dominic Arsenault, with a PhD in video game and film studies, is a professor in the Department of Art History and Film Studies at the University of Montreal and the man behind the project Multi-Memory Controller, successor to an earlier chiptune metal project of his called 8-Bit Metal which existed on MySpace (2005 – 2010). “MMC1: Power up the Chips” is the MMC’s debut album and the first to be recorded entirely by MMC in its own right, as two previous recordings were compilations of collaborations between MMC and other chiptune artists. (Chiptune is the electronic music created with programmable sound generator chips used in 1980s / 1990s-era videogame arcade machines, computers and game consoles, or music that intentionally imitates the sounds made by PSGs and/or combines them in more contemporary styles.) In MMC, Arsenault combines his major obsessions – video games (and the sounds associated with them) and 1980s power metal – into an eccentric and deranged music full of fun, energy, pounding rhythms and riffs, and lots of head-banging electro-grooves, all packed into nine anthems of futuristic videogame science fiction fantasy.

The singing may be a bit strained – Eighties power metal singing did draw on heroic operatic styles of singing, demanding a huge vocal range of two or three octaves and often more – and it’s probably the one weak element in this gleefully mesmeric music that runs rings many times around your head with shrill siren squeals, galloping thunder synth percussion and surprising crunchy noise guitar riffs. Song lyrics are homages to favourite videogames which often have a coming-of-age theme in which the hero is subjected to various moral tests. The album can be dense and frenzied, rarely pausing for breath save for those spaces that separate the songs, the beats are hard-hitting enough that listeners might be advised to keep headache tablets and water bottles close by, and the electronic music often seems possessed by devilish imps flitting in and out of the quicksilver melodies. When Arsenault takes his PSGs off the leash, they go for broke racing all over the firmament and far across the cosmos and back again in several laps in what seems just the space of a moment.

While most songs are self-contained mini-soundtracks in their own right, with the only major exceptions being two linked tracks “Behind the Mask” and “Beyond the Mask” which share some melodies, if the album is heard all the way in one go, listeners can get the impression that later tracks coming after “Beyond the Mask” are even more unhinged and crazed than previous songs with more complex layers of music and even more insane singing. As might be expected, melodies can be very poppy though they often go so fast and are replaced very quickly with other pop-oriented tunes that they leave less impact on the memory than you’d suppose. The most deranged song (and probably the most memorable because it’s the album closer) is the instrumental “The Age of Classics (Fantasia: Cosmogonia in Arcadia)” which belts out one videogame theme music motif after another at a rate faster than these can all go out of fashion. By this point the music is sounding very rich in a decadent and demented way, with a perverse air as though something in the spirit of the music has snapped and whatever evil sprite was contained until then is now spreading mischief and mayhem all through the MMC sonic universe.

The album is worth hearing in its entirety at least a couple of times to marvel at how 1980s-styled videogame music meshes so well with the speedy epic power metal music that was popular in the same decade, and to wonder why such a fusion didn’t take off when it could have. “… Power up the Chips” sounds so much like the music of that decade that it does sound a bit kitschy and the danger is that it might date faster than it should. Perhaps a follow-up album should ditch the Heldentenor singing attempts, to be replaced by an actual classic heavy metal singer … but then a major part of MMC’s idiosyncratic charm would be lost. The alternative would be to shift to more instrumental soundtrack-style chiptune metal that embraces more contemporary alt-mainstream metal genres.