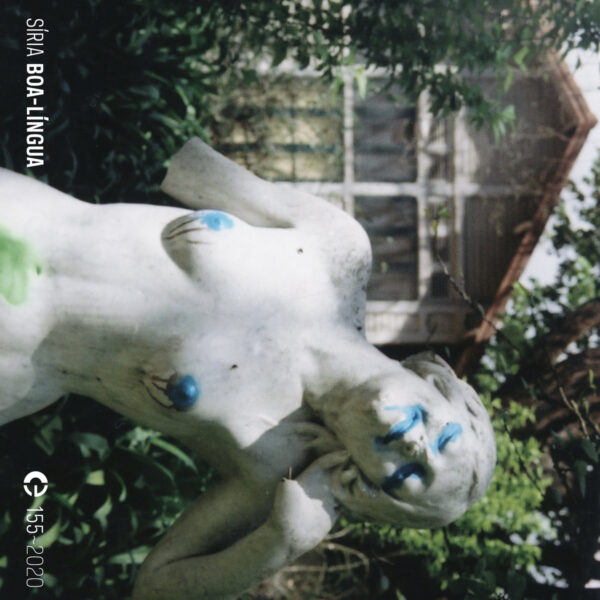 Last heard Síria with her 2018 solo cassette Cuspo, and she’s here today on the same label with a new tape called Boa-Língua (CRÓNICA ELECTRONICA 155-2020). Diana Combo created this work using much the same methods as before – her own voice being the most prominent feature, along with field recordings, sampled records, and found recordings, all processed in the studio according to her design.

This time around she’s pushing the envelope a bit, and the starting point was a bunch of informal recordings of her singing and improvising, which were never intended for release. She found it a liberating experience to do this, and wanted to see if she could repurpose these off-the-cuff experiments, with all their spontaneity and mistakes, into something more structured. At the same time, she’s doing cover versions of songs – well, sort of. At least four of the nine pieces here are songs that have been previously recorded or released by others, although the names in this particular list are mostly unfamiliar to me and may mean more to those steeped in contemporary Portuguese music, especially electronica. In any case these “cover versions” are also mixed up with samples and remix elements, and disentangling the strands of these mixed threads is not only next-to-impossible, it’s really not the point of the exercise. Diana Combo has managed to inhabit each work, and make it her own; every one of these nine tracks still carries the faint aura of menace and warning.

In this work, the warning applies to “obloquy, reproach, gossip, voluntary misunderstanding, etc.” and the hundred other ways in which we humans deliberately use language to evade the truth, either attempting to deceive others or (more likely) fool ourselves. The very title of this tape Boa-Língua is significant, as it translates as “good tongue”, the direct opposite of “malingua”, which is how a Portuguese person would accuse another of telling tales out of school and speaking behind your back. At a time when “fake news” is a hashtag in every other tweet on your stream, what could be more timely? There’s a simplicity and directness to this music I do like, and I feel there’s something about Diana Combo’s outlook which I can trust, and even if some of the music feels a little unfinished, it also has a porous quality which is good. From 12th March 2020.