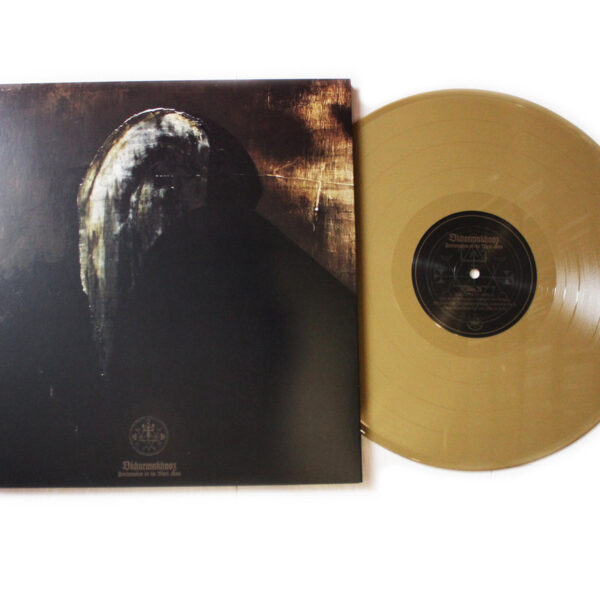 A very striking and solid debut album from a mystery Belarusian duo, “Proclamation ov the Black Suns” is well worth spinning a few times for its BM approach which looks back to 1990s-era second-wave melodic black metal and forward to fusing that style with doom, sludge metal and industrial elements, plus a bit of experimentation. The duo’s project name is Dkharmakhaoz which encapsulates what the twosome, known only as He and She, hope to achieve with their musical fusion: among the words in the name are “dharma”, in some Indian subcontinent religions referring to a code or set of values that (when followed) sets a person on a path of correct living that achieves good karma or consequences in future incarnations; the word “karma” itself; and of course the word “chaos”.

Initially the music is straightforward if chaotic melodic BM with crunchy guitars and rather thin synth percussion, and the production might seem a bit trashy, but once She starts singing, you realise everything is actually very clear and the music is more precise (if also rather cold) than it appears. She’s vocals are not nearly as raspy as might be expected of BM or DM-styled singing and there is a slight clean quality to them. As the album progresses, songs start to relax in tempo and a hard-hitting doom or sludge element enters the music with deep down-tuned guitars, even when there is blast-beat percussion. Songs emphasise a few riffs (which give them their distinctive identities) plus a few other texture layers that may vary from one song to the next: second track “Thy Way with the Serpent Entwined” has a deep grinding, undulating groove that gives it a reptilian flow while other tracks may be cleaner and feature sometimes eclectic choices of instrumentation and sounds. The repetition of few riffs and deep-tuned grinding tremolo guitar in most songs give them an oppressive industrial flavour. A deeply sinister atmosphere is always present and She’s vocals, coldly malevolent and even lascivious in its slight lisping, preside over the songs like the Queen of Darkness she must aspire to be.

The very clear, even airy production allows even the quieter ambient moments in the music – and there are plenty of such moments, usually at the beginning of most songs but also throughout a few tracks (for some reason the duo love submarine beep noises which appear on tracks 1 and 5) – to be heard clearly and gives the band its experimental edge. This aspect of Dkharmakhaoz, which extends to the use of samples and found sounds, comes to the fore in “Ascension”, from which tumble out clean-toned vocals, odd jarring rhythms combined with police-siren guitar tones, and awkward jangly dissonant guitar chords in an inspired if brief passage of nearly industrial-jazz improvisation. The closing track returns to a melodic BM standard but its industrial ambient coda is unexpected.

It seems to me as I listen to “Proclamation …” – I have heard it a few times already – that it keeps improving in its production and sound dynamics as it goes along, and becomes more adventurous and daring as well, with the result that the weakest part of the recording turns out to be the first song, which does have its odd high-pitched plucking moments that sap its energy. This is the kind of awkward experimentation with song composition and sound to be expected in new projects by ambitious young musicians keen on staking out new musical territory from the grounds of a familiar genre. There is a lot of depth in this recording with interesting and deft little touches that repay repeated hearings. If Dkharmakhaoz can maintain that level of intricacy, skill, balance and taste along with their ambition and passion for their music, they will be a band with a career worth following closely indeed.