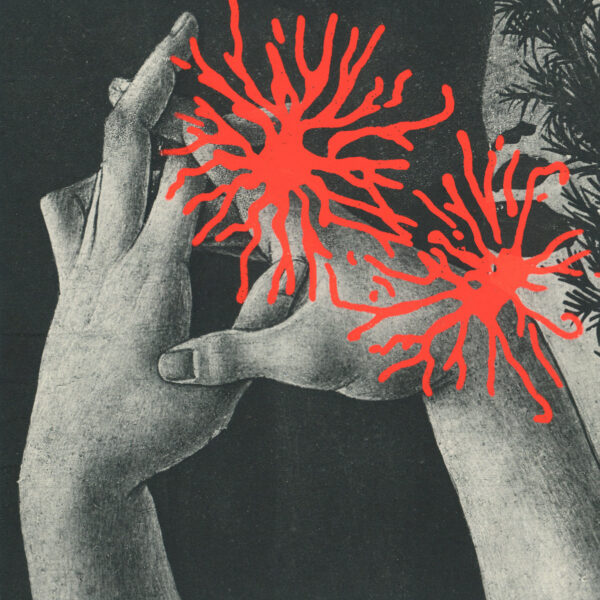 Latest release from Mark Vernon, whose imaginative and distinctive field-recording based records have been beguiling us for many years now. Quite often his records exhibit a strong connection between a concept/theme, the content / materials used, and the mode of assembly / process; for instance, Magneto Mori: Kilfinane, which involved burying found tapes and collected tapes in the earth, in a bid to make the materials connect more strongly with the very location they belong to.

Today’s record Paper Gestures (GLISTENING EXAMPLES GLEX2002) seemed at first glance to be moving away from this trend, and presents a series of field recordings made over a long period in parts of Norway. There is no connecting topic at play – I don’t think we ever find out what a “paper gesture” is on the record, and the enigmatic cover image by Barbara Breitenfellner doesn’t explain much – and not much in the way of elaborate post-processing; the main technical achievement has been to present Paper Gestures as an eight-channel piece, which I assume is a sophisticated means of playback and potentially a demanding requirement if you ever want to hear it with the full surround-sound experience. He created this layered version at the famed EMS studio in Stockholm, and the premiere concert of this acousmatic work took placed in March 2020 at Cafe Oto in London.

Paper Gestures is not merely an exercise in tape composition, though, and it exhibits many of the characteristic traits of this artist; foremost would be his subtlety and gift for understatement, and it’s fair to say there are a lot of fascinating and unusual audio events woven into the composition of these five rather quiet and unassuming suites. Vernon once again provides a shopping-list of sources with his press pack, something he evidently delights in doing; it’s a mixture of very specific objects, events, and unusual details, some of which you’d hardly think provided any audio opportunity for a roving microphone at all. Yet Vernon is there, capturing these faint traces, and presenting them in this compositional context, and once again limning a view of the world that is strange, poignant, mysterious. My favourite of the five so far, for reasons I can’t really explain, is called ‘A Soft Answer’ and unspools over 9:07 mins. In it, I can perceive something taking place like a dialogue between two nebulous entities, but it’s doubtful if they are human and they might be spirits summoned at a seance. I keep leaning into this piece, trying to discern what the “answer” may be; I’m certain it can be found. But they probably aren’t even human voices; more likely it’s “wind whistling through the vents in the Oslo underground”, or one of the other things from Vernon’s list. You may prefer ‘Permea’, which feels like a beautiful landscape painting in sound, would have been welcome at the doors of the Gruenrekorder label, and is as close as Vernon has come to composing a form of synthesised music, I would say.

Released on the label run by American sound artist Jason Lescalleet, and who better (given his rather hermetic and inscrutable practices). From 26th March 2020.