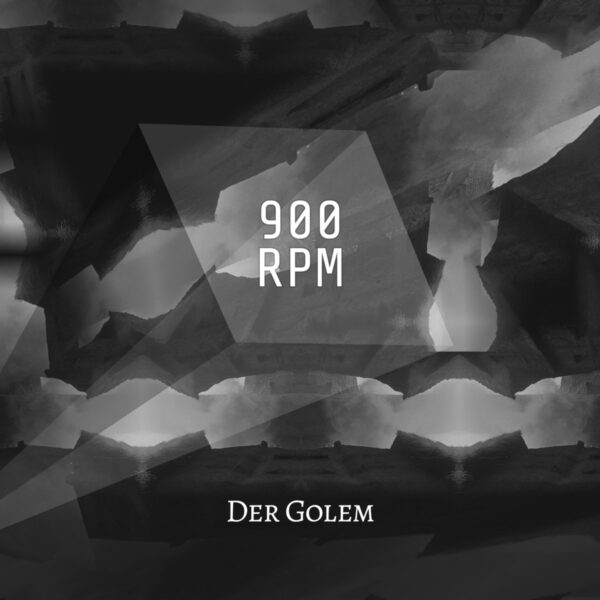 Quite good instrumental music from 900RPM on their cassette Der Golem (SUBLIME RETREAT SR002), where they perform a modern soundtrack to the famed black and white film Der Golem made by Paul Wegener in 1920, a piece of cinema regarded by scholars as a fine early example of German Expressionism (one that’s often eclipsed by its more famous cousins, such as The Cabinet of Dr Caligari or Metropolis).

The players of the music are David Müller, Mark Lindhout, and Matteo Giomi; the band are based in Berlin and have been active since 2014. They regard their work as “experimental noise drone”, and while they began their experiments with tape recordings of washing machines (which does sound rather old-school Industrial in its approach), they have since evolved to using home-made instruments of their own device; these might include the “Drone String” and the “Ondulator”. At time of writing I have no way of telling if these are electronic devices, but the album does project a mostly acoustic feel, which is nice; along with the abstract and vague drones, and the minimal instrumental melodies, there is also much percussion punctuating the dramatic changes. Evidently the trio feel some connection to Wegener’s landmark film, not just because it was made in their home of Berlin, nor because of the release date of their cassette coinciding with the centenary anniversary of the original; their connection is a stylistic one, and they claim that the “bizarre impressionist architecture” of Der Golem corresponds in some way to the very sound made by 900RPM.

I can dig this, since everyone loves the crazy set design and wild visuals of German Expressionist movies, though I would go further and say these visual tropes were often intended to evoke the deranged state of mind of the protagonists on the screen, or more generally to suggest a sense of psychological mystery and horror. Our three friends seem more attached to this idea of “space” than they are to people; I myself would have thought that Paul Wegener’s own performance of the Golem – he acted as well as directed – might have registered with them at some level, to say nothing of the high-contrast photographic images of his clay visage, lit from odd angles. In the event, the music here certainly conveys an abiding sense of monochrome grimness and imminent terror, but doesn’t do much to develop any particular musical theme; it mostly stays in the same spine-tingling place, with the occasional rattle of percussion to jangle the nerves. At 50 mins a side, there’s a lot of music to enjoy, but that’s because they devotedly played their way through the entire film. They invite us to view a copy of the movie online (in the public domain, it can be streamed from the Internet Archive, for instance), as we spin the tape.

The cover image is provided by band member Lindhout. I’m not immediately able to connect it to the celluloid Der Golem, although it might be an obscure detail of an interior from the film, overprinted in a kaleidoscopic manner to create an abstract pattern. From 16th March 2020; the second release from this new Polish record label.