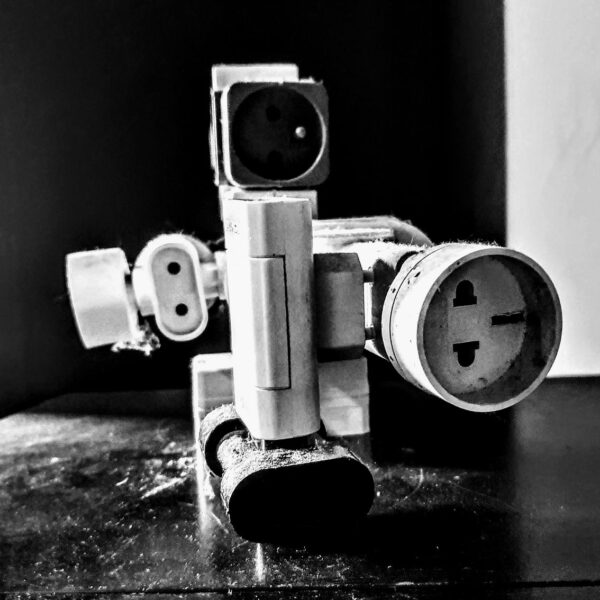 This record with cover art of many power sockets conceals a fine slab of French noise/improvisation, from the team-up of Quentin Rollet with Romain Perrot, who recorded L’Impatience Des Invisibles (REQORDS REQ004 / DECIMATION SOCIALE DSCDQR) in 2019 at the PUSH studio in Paris.

Quentin Rollet, who plays saxophone, synth and electronics on this record, was the co-founder of the Rectangle label (with Noël Akchoté) which put out a good deal of unusual records by Derek Bailey, Eugene Chadbourne, Fred Frith, Lol Coxhill and others in the 1990s and 2000s, though I must admit I’ve only heard him once before on the MOSQ record he made with erikm and Charlie O. Romain Perrot is of course a personal favourite in these pages, last heard on two great records of wild noise, one by Maginot and the other by Saboteur Saboteur. Perrot plays electronics, keyboards, and adds vocals for this record, once again bringing his primitive and intuitive style to this music.

While ‘Le Chant Du Bouvier’ has its fair share of grit and grime and noisy elements, floating its soothing saxophone blasts over fractured synth bursts, it’s the track ‘Sans Aveu’ that really gets my crystals glowing with excitement and more than justifies the price of entry to this coal mine. On it, Perrot emits non-verbal growls and dark murmurs dredged from some unearthly region of a man’s soul, while sullen electronic devices make distorto-interruptino statements of an unsettling nature. Into this twilight tunnel region, the bright sax of Rollet enters like a mosquito on golden wings, attempting to stay above the fierce pulsings and angry hammers pistoning up from below. There’s a real tension between the emotional content, the psychological makeup of these two men, one pessimistic and malevolent, the other nimble and pro-active, hoping to bring a little tranquillity to the empty lives of men who march the streets like medieval beggars. Eventually Perrot settles for allowing his keyboards to punch out a spastic non-syncopated techno rhythm while other devices hiss out poisonous vapour, and his growling intoning voice enters into some form of harmony with the trilling sax lines. Quelle contraste.

‘Sans Aveu’ is a personal benchmark for this listener, a centre-piece of the album, but others may enjoy ‘La Tradition Est Une Trahison’, which resembles the meeting of a romantic poet clad in flowing robes (Rollet) and a half-mad aircraft pilot (Perrot) who is buzzing madly around the aerodrome in a replica of Amelia Earhart’s plane. What I’m trying to convey here is the thickness of the music, the textures which envelop everything and give you little room to move around in. It’s a wonder the sax half of the act can find any space to play in, but he inserts himself like quicksilver darts in cracks in the concrete. Incidentally the title for this one reads to me like a Situationist slogan picked up from the streets in Paris in May 1968, and may perhaps be transposed as a scathing barb against the conventions of so-called “free” improvisation which have all but developed into a trap for any honest musician. On ‘Embrocation Siamoise’, there’s something else again – surprisingly sweet synth tones and melodies, perhaps too sweet to come from Romain’s keyboard array, causing a perplexing conflict in the musical continuum. This conflict continues as the piece moves suddenly into blockier, noisier, territory, creating grim and grey vistas in the mind and exhilarating us with sci-fi yarns and visions of utopian cities. This particular track seems bent on carrying on the tradition of another great French electronicist, i.e. Richard Pinhas of Heldon, only forsaking any pretence at prog-rock futuro-idealism and mixing in brutally simple one-finger riffs and obnoxious electric tones. Great!

As regular readers may know, this writer has a strong attachment to sax-electronic duo records in the free improv mode (I have a mental list starting with Braxton and Teitelbaum), but few of them are as unrefined and impolite as this one, freely belching out polluted smoke and unpolished nuggets of music like so much crude ore dug straight from the ground. As the artistes themselves have it, they’re aiming for a blend of Albert Ayler with “the cold industrial music of pioneers like Throbbing Gristle”. Jointly released by Reqords and Decimation Sociale; arrived 7th April 2020.