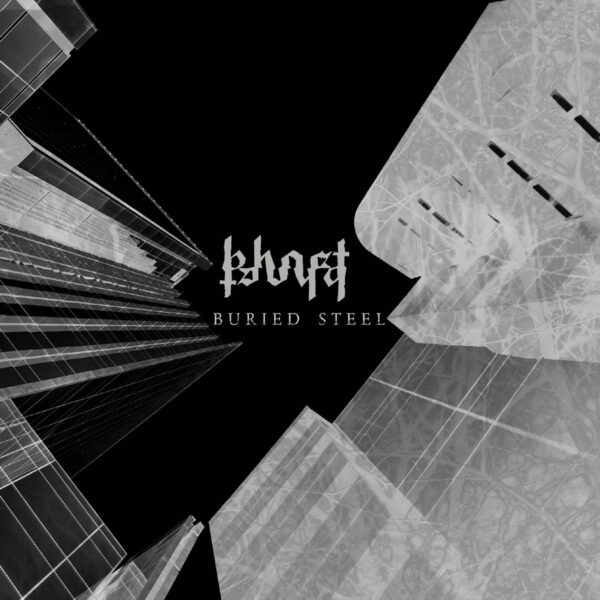 Last heard from Khost, the Birmingham duo of intense industrial noise, with their 2017 album Governance, which we evidently found pretty tough going – “over-wrought shouting, pounding percussion, and messy indistinct noise” were just some of the hurdles presented to any listener with a more delicate constitution. Today’s release Buried Steel (COLD SPRING RECORDS CSR278CD) is no less relentless, and Andy Swan and Damian Bennett expend a tremendous amount of effort in concocting brutal episodes of a hammering nature, replete with growled and grunted vocal-screams, excessive guitar fuzz attacks, and thick fog-clouds of the nastiest noise they can summon from the lower depths.

They’re aided in their subhuman efforts by a number of guest stars, including Stephen Mallinder from Cabaret Voltaire, Eugene Robinson from Oxbow, and Stephen Burroughs who currently does his own hellish and suffocating work for this label performing solo as Tunnels Of Ah. My perception of the Governance record was that it pointed to a long-held grudge against society, a stream of poisonous invective emitted from the lungs of the downtrodden and the repressed; today’s record is equally vindictive, but Khost are proposing two modes of response to the inescapable doom which is remorselessly advancing. One approach is to bear the pain with the stoicism of a Spartan soldier, and the other approach is to seek recourse in a nocturnal, dreamlike state of mind. I’m taking cues from the press notes now, but both these themes are discernible in the general trend of the record, a record which incidentally is a lot more dynamic in range, tempo and mood than the rather samey blasts from Governance. Maybe the frequent spoken-word interludes, backed with solemn and menacing dark-ambient tones, contribute to this impression – not that the messages you hear will from these speaking voices offer you much solace or consolation, as each track unveils yet another grisly chapter in this overwrought portrait of nameless doom.

For further indicators of the record’s themes and subject-matter range, I direct you to track titles such as ‘Judgement Is Infallible’, ‘We Will Win’, and ‘Blood Gutters 6 x 4 x 1’, titles which carry a whiff of Mussolini-styled thuggery which is far from palatable. Meanwhile, the cover artworks take us down a more supernatural route, with photos of trees and forests with superimposed spectres and anguished faces; that’s inside the digipak, while the front cover makes a visual statement about the crushing, dehumanising power of brutalist architecture. Apparently the recording process, which took place between 2018 and 2019, was smitten by an accident in the form of an electrical fire which damaged some of the band’s boxes, meaning that valuable work was lost and some of the music had to be reconstructed from old reel-to-reel recordings. As it happens, this setback doesn’t seem to have compromised the ferocity of the finished result. From 6th April 2020.