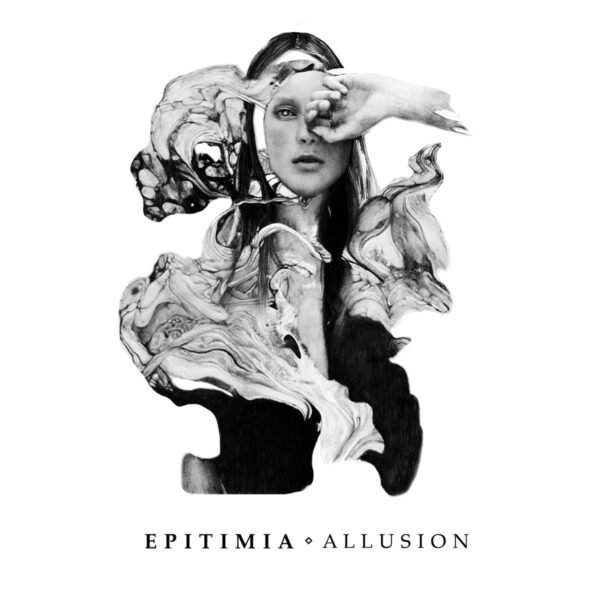 Not for the first time and certainly not for the last time I have to admit the front cover artwork for “Allusion” got my attention before the band or the music did: it’s an intriguing work in itself in which boundaries including those of identity, time and what we consider reality or illusion are in the process of dissolution. Likewise Epitimia regard this, their sixth album since the trio formed in St Petersburg (Russia) back in 2008, as a significant crossroads work looking back on previous recordings based around themes of individual suffering and struggle and altered states of consciousness which may include what Western societies might consider mental illness (but might not actually be so from other viewpoints); and as a portal to future creative work carrying those themes forward.

All songs are sung in Russian but those who don’t understand the language can still thrill to the emotion and melancholy in the fast-raging music which ranges from atmospheric black metal to post-BM. The main drawbacks of the album are that all seven songs are very long (only one is less than seven minutes in length) and tend to sound much the same with a limited palette of instruments working in a minimal fusion style for the most part until the final track. The BM style tends to be thin and the guitars are usually in a state of constant grind with some low-key solo lead guitar or bass guitar breaks. The sorrow and depressive moods however are clear in the pain and anguish of K’s vocals, alternately haranguing, ranting or keening, and in the corrosive guitar chord storms. Percussionist / violinist M’s drumming is soft and stays in the background but this serves to highlight the expressive vocals and A’s intense guitar work.

On most tracks the music switches between withering, scourging blast-beat-paced BM and passages of emotional drama and melody. Vocalist K is very much the star of the show as he rages or shrieks in pain. Some of the best music on the album comes with the juxtaposition of post-metal, post-rock or dark moody blues music and the speeding BM shower, and the album itself improves as the music expands from the early blast-beat rush of the first two songs into doom-like melodic BM (“Waiting for the Doom”) and passages of clear-toned soaring guitar melody, clean soulful vocals from a guest vocalist and wistful ambience appear (“I Aspire Like A Bird”). The best is saved for last with “Post Scriptum” which features the most varied music and moods and a very bleak, dark atmosphere with clean vocals and shoegaze noise grind.

There are good sections of mostly instrumental music where the guitar soars and the emotion is nearly overflowing but these are let down by overly long songs without distinct riffs all sticking to a very limited palette of guitars, bass, drums and vocals (clean and BM) that are also restricted in their range. All tracks could have been edited for length without their meaning or emotional range and intensity being affected. The smooth feel of the music and the soft drumming might be blunting the emotional effect as well. With the music emphasising the vocals, there is a need for K to vary his singing to include other forms of distortion (such as with a vocoder perhaps) and maybe clean-voiced spoken-word monologues and recitation. As it is, “Allusion” is a decent recording with good production and playing, and some inspired moments, but all that constant guitar grinding for nearly one hour straight turns out to be a real grind of the wrong kind.