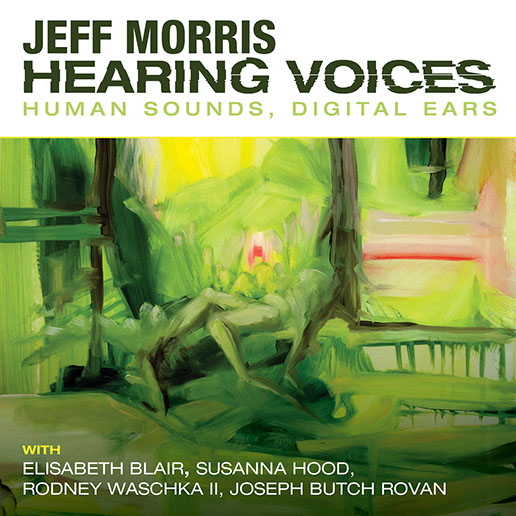 We heard from Jeff Morris with his Interfaces album in 2018, where he applied his extensive electronic manipulations to the music of two jazz players, Karl Berger and Joe Hertenstein. The crux of the music lay in a collision of two different imperatives; Morris does not, as far as I know, profess to be an improvising musician, let alone a jazzman, rather one who pursues his own agenda with his equipment and effects, and on that occasion he certainly put those two German players through their paces and gave them many a hurdle to leap. Things are taken in a different direction with today’s release Hearing Voices: Human Sounds, Digital Ears (RAVELLO RECORDS RR8033), where the plan is to work with the human voice, with singing, improvised vocalisations, and spoken word.

The guest players are Elisabeth Blair, Susanna Hood, Rodney Waschka II, and Joseph Butch Rovan – all of whom consent to have their vox humanas pulled every which way by the interpolations of Morris. Interestingly, they have backgrounds in mixed media, dance, theatre, performance, composition, and computer music; perhaps the ideal collaborators, in this context. Varying degrees of success are the result; on ‘In The Middle Of The Room’, we have the startling effect of a chaotic roomful of speakers all yabbering at once, when it turns out to be E. Blair overdubbed and replayed, with her voice tweaked into different pitches. It’s an audience grabber for sure, and also not too far apart from the kind of scat-sung jazz we associate with Ella or Sarah Vaughan, thus suggesting a possible way in for a listener to this rather experimental set. It’s untypical of what follows, though, and while Blair has verve and elan (her spunkiness is more than a match for the live sampling boxes), there’s a slightly corny edge which creeps in whenever a flattened fifth is used.

I fared better with ‘Definition of A’; Blair is joined by S. Hood, the electronic effects are sympathetic and strong, and we’re in much more abstract free-form territory, which I like. You can almost imagine Meredith Monk or Joan La Barbara behind the mic for this fine 10:17 cut, were it not for the lapses into sentimental la-la trilling and the lack of minimalist compositional rigour. It’s to Morris’ credit that he does all his parts in real time; he describes his work as “tugging and jerking at the electronic marionette strings”, an expression which I trust is not a comment on his two collaborators here (no-one wants to be thought of as a dummy). His spontaneity works well on this occasion, and shows he’s some distance from say Luciano Berio who would have required a lot more preparation and deliberation; Morris just gets stuck right in, and seems to delight in his effects like a child would open a box of fireworks. ‘A Tuesday With Rodney’ is even more elaborate – a three-part suite which all told occupies some 20 minutes and features the voice of R. Waschka multiplied many times over. His vocal approach is more florid, he doesn’t hold back, and parts of this set verge on the grotesque, particularly on the excesses of ‘Schenkerian Blues’ where his emotive tone is made even more voluble by its transformation into a splurgy, digitised wail.

Penultimate cut ‘Jabberwocky’ is my second favourite on the album, even allowing for the violence it does to the work of Lewis Carroll (a transgression which, for this English reader, is a duelling matter). Morris subtitles it “A Timbre Poem”, and it’s mainly about creating an atmosphere with mildly unsettling voice treatments and darkened tones to conjure up the forest setting which the poem demands. Rovan’s voice is barely recognisable as human, and only fragments of the text survive; this is about as radical as Morris’s work gets, I suspect, but it’s not half bad. From 11 May 2020.