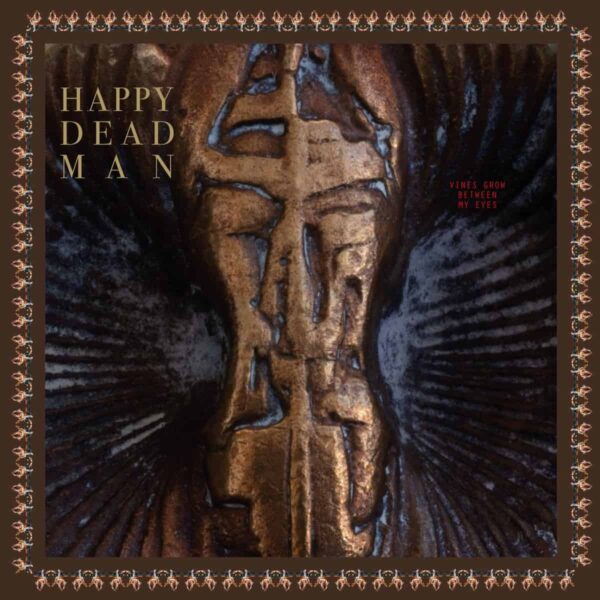 A collaboration of three stalwarts of eccentric experimental rock / pop – W David Oliphant (Maybe Mental) on prepared computer, Alan Bishop (Sun City Girls) on acoustic guitar and vocals, and Michael Pistrui (Fat Gray Cat) – Happy Dead Man wasted no time in releasing its first album, the appropriately named “Vines Grow Between My Eyes”. Well if you had an instant supply of fresh sweet-tasting juice literally right in front of your nose, you too would be very happy regardless of the state of your health; indeed your health would be the last thing on your mind if you were pushing up daisies. No less effective in cheering up – or maybe cheering down – folks, dead or alive, are the songs on the album, all very striking in the unusual visual poetry generated by the lyrics, starkly dark atmospheres, the suggestion of post-apocalyptic blasted-heath psychedelia in their severe minimalism and the combination of electronics and acoustic instruments to produce an electronic / industrial folk music. Each song seems steeped in a strange and dark Americana which speaks of vast and lonely landscapes long ignored or abandoned by people once they had outlived their usefulness, whatever that may have been (because it has been long forgotten), but where restless ghosts that cannot leave them still travel long distances in search of something long desired for which they paid with their youth, their health and their lives but which they can only vaguely articulate even to themselves.

With no less than Bishop and Pistrui on vocals, the songs often can be eerie and have a strange exotic feel especially where on a track like “A Memory”, music traditions from different cultures (in the case of “A Memory”, the cultures referenced include Southeast Asian / Cambodian popular music culture and US blues) are combined for the effect they produce through extreme contrasts. Indeed as the album continues, there seems to be an interrogation involved of US actions towards other nations over the past century and what such actions say about the mass psychology of US culture. Listeners had better be prepared for some uncomfortable lessons to be learned. At times a sense of aloneness and isolation, not a little bleak and desolate, is present (“Empty Trees of Anger”) and the album comes across as a soundtrack for a noir film in which the sordid underbelly of capitalist American society is an ever-present theme.

The songs aren’t particularly long and the music is as austere and sparse as can be without disappearing into the darkness yet they leave a deep impression of a dysfunctional, even sociopathic society in decline beneath the fading glamour and the pomp.