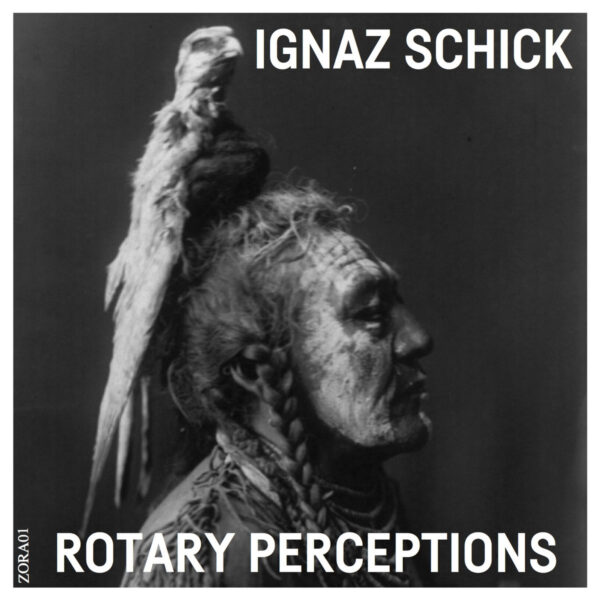 The great Ignaz Schick launched a new project in 2020. Active for many years, he founded his own record label Zarek over 20 years ago, mainly from a sense of frustration and disappointment after working with other labels, and he wanted to get back to an artist-run imprint where he could offer safe harbour for his many friends and collaborators. Indeed I do remember receiving the very first Zarek item by Perlonex, evidence even then of a rich Berlin-based improv scene, with musicians carving out their own notch in the electro-acoustic basin. It turns out that Schick, prolific improviser, composer, performer and sound artist that he be, owns and curates what he describes as “vast archives” of unpublished and unreleased materials, several albums’ worth of recordings that got overlooked or remained unfinished for whatever reason. Now he’s putting them out under the Zora imprint, the Zarek Online Release Archive, and we should see 24 of these emerging in 2020 alone. Here are the first six – along with Bandcamp releases, there are limited CDR versions too. They appear to have themed black-and-white artworks featuring historical photographs of Native Americans.

Rotary Perceptions (ZORA001) is Ignaz Schick solo, on 10 recordings he made apparently in a single session in July 2011. Here he is doing the “rotating surface” thing, or more accurately the “objects on the turntable” thing, which I don’t think I’ve ever heard him do. Small objects are placed on the rotating platter and miked up with small contact microphones, although other motorised units may also have come into play. Bits of plastic, metal, gongs, and violin bows are just some of the every-day things that found their way onto his deck. There have been others who used this “rotary” method to great effect (Alfredo Costa Monteiro, Anne-Francois Jacques, Pascal Battus, perhaps erikm, Otomo Yoshihide), but Schick impresses us here with his restraint, subtlety and finesse, and he coaxes a wide variety of textures and delicious crackle-filled drones from his set-up. Evidently he worked hard at his craft, and soon became an expert in handling the variables – the “the pressure and angle of the objects generate a vast arsenal of sonic possibilities”, to use his own words. Oddly enough, having perfected the technique by 2012 and reached some kind of apogee, he gave it all up in favour of more conventional turntabling, using vinyl records. No matter though, as this set is extremely satisfying, full of hypnotic trance music as well as startling noise-bang effects. It may seem odd that he singles out Charles Mingus as the musician to which he dedicates this highly abstract music, but I’d like to think the great Mingus could recognise a fellow perfectionist at work, labouring to very high standards. With each of these short snapperoos, you really get the sense of experimentation, of exploring new ideas. 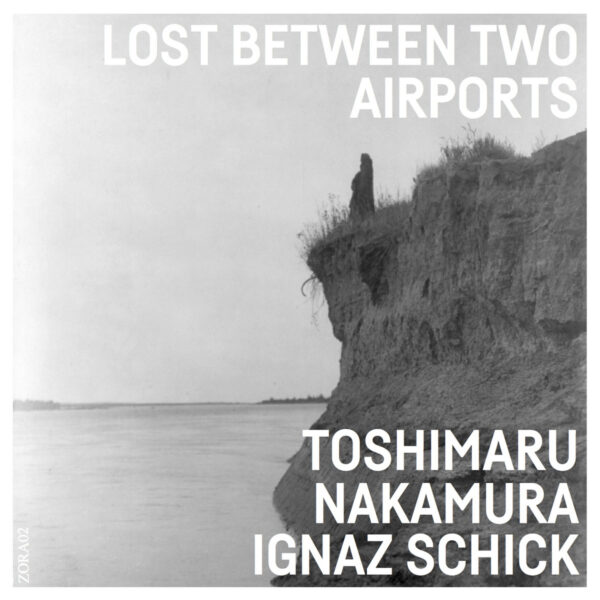 Lost Between Two Airports (ZORA002) is a duo with Toshimaru Nakamura. This is a 2009 recording made in the Cave12 venue in Geneva, but the two musicians knew each other long before this, having met up in the mid 1990s in Berlin, when times seemed a little edgier and the beer was salty and sweet. I hadn’t realised, or else had forgotten, that Nakamura used to play the electric guitar before he adopted the instrument he’s now renowned for, i.e. the no-input mixing board that enables him to manipulate feedback in powerful ways. Here, he’s on the NIMB while Ignaz Schick plays his turntable-and-object set-up with electronics, and they turn in a single performance at 41:45. This one certainly exhibits some wild dynamics – very quiet crackling and hissing versus very loud explosions of coarse-grained indigestible chunks. I seem to have heard a few recordings made in this Cave12 performance space – it seems to encourage musicians to create claustrophobic music with a hermetically-sealed vibe. 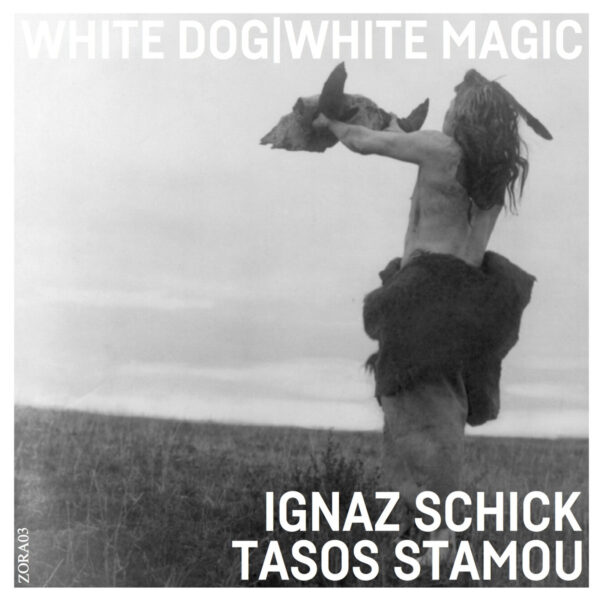 Nice to hear from an electro-acoustic player whose name is new to me, and Tasos Stamou turns out to be a very gifted and quite lyrical player on this record White Dog / White Magic (ZORA003). When Ignaz Schick came to Athens in 2009, Stamou invited him to meet up and play together, and some of the results from 2009 and 2010 are captured on this release, stitched together from four different performances and studio sessions. Not a one for false modesty, Schick warmly describes their musicianly rapport as “mesmerising interplay and connection”, a precious commodity when one can find it. The title of this album refers to the circumstances of their first musical meeting, when apparently the audience was rather small. In fact it was really was just one woman and a dog (unless you count the musicians and their girlfriends). By Schick’s account, he and Tasos came to this point by “pure magic and blind understanding”, a good way of communicating the intuitive aspect of improvisation. The instrumentation includes a prepared zither plucked or bowed by the Greek half of the act, along with electronic elements, loops and turntables, and the usual bundle of objects. The first piece is comparatively “tuneful” within the context of this genre, and I attribute this to Stamou, and though I never heard his music I find it interesting that he has played with Mike Cooper. The second cut seems more formal to me; exploring abstract tones, textures and long-form surfaces in a comprehensive manner; compelling, assured, but the “magic” is all on track one.

All the above from 11 May 2020. Tune in next time for a review of the other three CDRs.