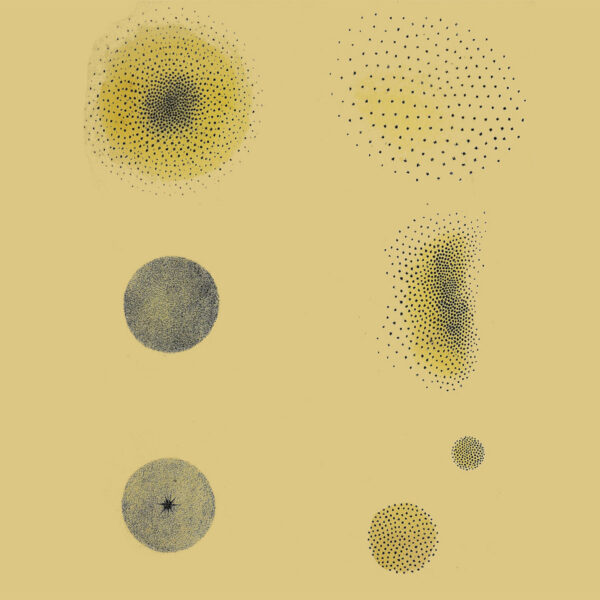 With only perfunctory bandcamp and discogs entries plus an inclusion on their label’s website gallery, it seems that those in the Loplop camp are keeping tight-lipped over their endeavours since forming a while ago. What I can glean from these scraps is that they’re a Copenhagen-based instrumental concern, who’ve christened themselves after Dadaist Max Ernst’s alter ego (a.k.a. ‘The Superior of Birds’); the focal point of Max’s at times, nightmarish, collaged litho-world. Quite why the band have dialled up the name of an avian spirit guide is not immediately clear, but I guess it could be having sympathies that lie with a recognisable character who is found in situations that are out of the ordinary (?). Which is quite appropriate for guitarist/sleeve illustrator Jon Lipscomb, bassist Dan Peter Sundland and master-drummer Ole Mofjell (also of The Big Yes). A threesome who, though raised on avant garde jazz and the spontaneous, have chosen a group sound that harks back to the darker recesses and alleyways of the ‘No Wave’ phenomenon. Not so much the unholy four of “No New York”; the comp of comps (who can ever forget the beaut shiner sported by Mr James Chance on the back sleeve??), but more those caught in the slip steam like Red Transistor (speaking of which, isn’t it time their leader Von Lmo was thawed out of the block of ice for a further regeneration?), Jacqui Ham and Nina Canal’s Ut, Blue Humans and Sonic Youth, circa “Sonic Death” (Ecstatic Peace). Pretty lofty comparisons agreed, but I dare say these birdmen are up to the task.

All through the five numbers, the hyper-frantic “Mono Wanderers”, “Flesh Wind”, “Modgud”, the ‘b’ film forebodings of “Radiant Flux” and “The Mephi” (with its uncredited alto sax blurt), they very rarely ever let up. The squalling mass of twisted/tangled notes and noise are pretty remarkable, ‘specially as they’re working with such a bog-standard set up, with no fancy Dan post-production filigree and nary an fx pedal to stomp on, petulant like… It’s also interesting to note that the label name seems to mirror the band’s mindset. The former, ultra-anxious in getting its wares out to a waiting Joe/Josephine public… while, under pressure cooker conditions, the latter’s creative juices appear ready to blow at any moment. Duck and cover!