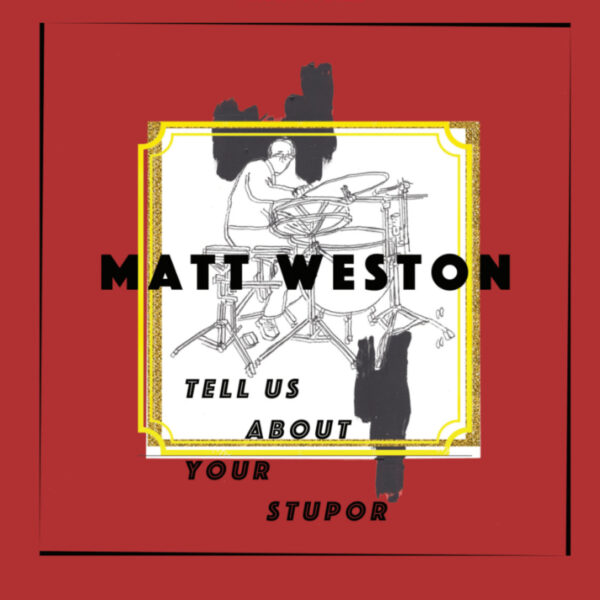 Latest item Tell Us About Your Stupor (7272MUSIC #013) from American maverick Matt Weston of Albany, New York State is a double-sided vinyl notching in at about 15 mins a side…it’s another one-man performance mostly done with percussion, but also using graphic scores, conventional notation, electro-acoustic elements and free improvisation in parts too.

Weston likes to think big, and stresses the “multi-dimensional” nature of his work. He also explores the composition-improvisation dilemma with the voracious appetite of a grizzly bear, using knock-down arguments to brush aside any nay-sayers or namby-pamby types. One aspect of interest to this release is the two titles, ‘Don’t Yell Or Hit’ and ‘Stop with the Brushing’, both of which are lifted from Jerry Lewis‘s act, or as the press notes have it “the revolutionary experimental filmmaker Joseph Levitch.” Jerry Lewis’s schtick was to behave like a very socially-awkward naif, covering his blunders with much childlike bleating in nasal tones, and the films often led his character into hilarious slapstick situations where he could compound the chaos with his flailing limbs. It’s debatable how “revolutionary” or “experimental” his mainstream comedies were, but I understand his canon was highly-regarded by French cineaste intellectuals, and not in an ironic sense either.

I will mention a scene from The Patsy (1964), because Weston’s record would in places make a good alternative soundtrack for it; Lewis is about to receive voice lessons from a temperamental piano tutor named Professor Mueller, and before the lesson gets underway he runs amuck in an apartment full of precious vases. For several minutes he bumbles about and manages to knock over many a pedestal, yet always catches the vase just in time. I shan’t say that Weston, with his hefty swipes and capable drum attacks, is emulating the spastic movements of Lewis in this harlequinade, but even so there are traces of hilarity in the recording, in the form of seconds of duck-quaking sounds and grotesque elephant-trumpet effects that resemble, or invite, laughter. The piece also has a lurching, chaotic quality, and its direction of travel is hard to fathom; at one level at least, Tell Us About Your Stupor could be read as a statement of pure absurdity. But there’s also the sonorous metal scraping and powerful pre-recorded parts (I assume), inspiring a form of crude awe; the album carries this air of solemnity and heaviosity. So often Matt Weston feels to me like he’s building a huge scaffold from iron girders, with himself acting as both architect and riveter, and with a design for a grand building in mind.

Lastly, the punchline to that vase scene…Lewis traps the Prof’s hand in the piano lid, who screams in agony and hits a high C above F with his booming tenor… thereby shattering every single vase in the room with his frequencies, and indeed everything else in the room, finally causing the ceiling to collapse. Funny, ja? From 20th April 2020.