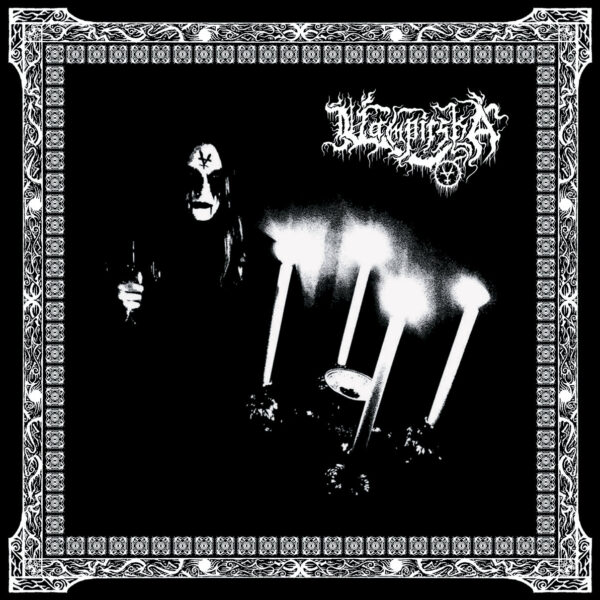 A truly raw and filthy lo-fi underground BM horde, Vampirska bring a message of monstrous black Satanic ritual evil on their debut album “Torturous Omens of Blood and Candlewax”. Snigger at the melodramatic Hammer Horror album title if you will but the music is sheer dried-blood crusty grinding guitar and roaring, wailing demon noise. Folks fond of obscure underground raw BM acts like Lamp of Murmuur will find much to like with Vampirska – the difference is that Vampirska seem more raw and feral in style, and less inclined to go for catchy rock’n’roll groove energy when sheer unadulterated noise chaos and a garage feel suit this horde better. (At this point I better say that I have no idea if Vampirska is a horde of one or of many.) On “Torturous Omens …” the most basic melodies and riffs, repeated over and over, form the frames over which Vampirska pile on open-scab abrasion and noise grind, and squeeze out six songs of sheer bleeding-ear terror.

After a coldly solemn church-organ introduction in opener “Revenant”, the roaring Vampirska storm erupts in “A Pale Face Eclipsed By Shadows” with rough-edged rocking riff loops scything out a definite structure while demon voices growl and rage in fury. The guitars race ahead into the next track with very little pause or change in pace and mood, and the mad vocals just keep going as if not noticing that the song has changed. While some riffs and melodies can be folk-like and catchy in their own way, Vampirska appears not to make much effort to build them into actual songs with clear beginnings and endings, with identities of their own, but rather to make them parts of an ongoing soundtrack of raw ferocity that acts on instinct and a taste for blood. The energy is restless and needs an immediate outlet, it cannot be restrained or kept simmering – and so out it comes in all its chaos and intensity.

The best is saved for the title track, a sprawling 10-minute whopper in which the vocals almost become a literal storm in their own right, controlling the weather and the clouds and their direction while the guitars continue to churn away and become a bit clearer in their sound and meandering journey. Outro track “Feasting on the Dried Blood of Majesties” concludes the album with very little change in style from the other five songs and with no new developments, instead emphasising the raw brutality and aggression, and the paradoxical combination of defiance and depression behind the rage.

Vampirska might not add anything that fans of old-skool melodic raw BM don’t know already but the music is a reminder that no matter how long ago this genre began, or how many bands it has chewed through, it still retains a raw energy and spirit that never bends to the will or desires of puny human beings no matter how hard they try. An atmosphere so cold and chilling that even the demonic vocals are flecked with ice spikes as they rage contrasts sharply with the aggressive mood and this contrast is one of the highlights of the recording. The way in which the guitars carve up the noise into definite riffs in the way of people wielding chainsaws to carve up wood and transform it into recognisable sculptures is another strong feature of the music which Vampirska should continue to pursue.

For such lo-fi aggressive raw BM, not all that complex in the limited range of instruments used or in its musical structures, this recording is very emotional and intense, its moods running from aggression and hostility to despair and torment. Whoever Vampirska is or are, this horde certainly plays as if its time on Earth is limited to the next 24 hours and no more, and the band must return to its world of never-ending chaos and disorder, despair and existential torment in a black vacuum.