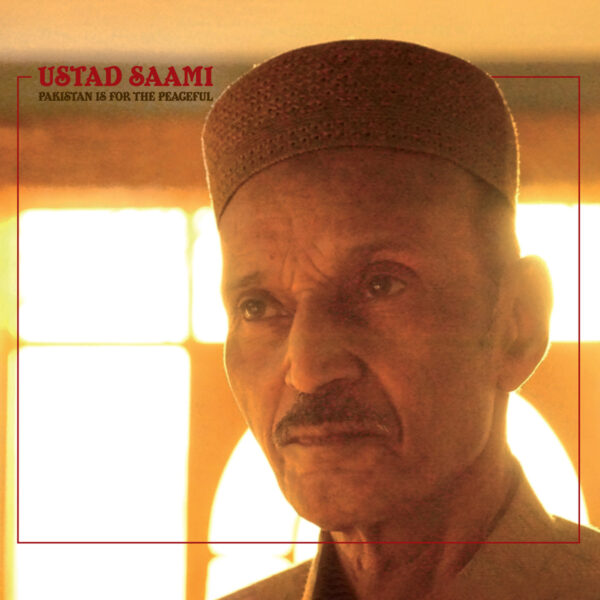 Ustad Saami, Pakistan is for the Peaceful, Germany, Glitterbeat, GBCD 097 (2020)

Here is a very highly immersive and hypnotic work of devotional spiritual music and singing by Pakistani Sufi mystic Ustad Naseeruddin Saami. Recorded on the rooftop of his home in Karachi by engineer / producer Ian Brennan (who has produced albums for Tuareg group Tinariwen and Malawi’s Zomba Prison Project), “Pakistan is for the Peaceful” features three long tracks sung by Ustad Saami with minimal droning musical accompaniment on harmonium, tamburas and tabla drums provided by his four sons who also contribute backing vocals. The selected tracks are intended to be performed at different occasions and times of the day so we can assume all tracks were not necessarily performed in one session or on the one day. All pieces were recorded by engineer / producer Ian Brennan who won a Grammy award in 2011 for producing Tuareg group Tinariwen’s “Tassili”.

Opening piece “Prayer for a Saint” is a very long work of steady soaring vocal drone, demonstrating incredible breathing and volume control on Ustad Saami’s part, as his voice sails through the air into wide vistas unknown. At over 19 minutes, this track seems daunting for listeners to follow yet almost as soon as the music begins and Ustad Saami starts his journey, time stops and for a brief period we are in another realm, another dimension, with Ustad Saami as our guide. “Aman (Peace)” is a quieter work which I imagine (even though I know next to nothing of Islamic religious practice, let alone the practices and rituals of Sufi mystics) would be sung in the evenings when all the hard work for the day has been done and what remains to be done is the Sufi master’s blessing to his followers and his enjoinment that they all end the day in peace with one another and with themselves, all arguments, disagreements and conflicts having been resolved or in abeyance for future resolution:. The one thing that now matters is that people bear no ill will or hatred towards one another. As the music and singing proceed, many moods and messages woven into the quietly steady yet meandering tones (in themselves very rich and shimmering) quietly reveal themselves to this enthralled listener. The closing track “True Notes (“Happy Morning”)” appears as an encouragement to listeners to start a new day with clear eyes and a clear mind, putting aside the enmities of the past and tackling the tasks of the day with new energy and vigour.

The paradox with this style of sparse, minimal droning music is that it appears simple and loose, without apparent structure., apt to go off on tangents with no apparent goal in sight, yet it is actually highly disciplined and conveys much non-verbal information about the environment – physical, cultural, social – in which Ustad Saami sings. The vocalisations he makes – they include microtones within tones – express as much human emotion as is possible and his sense of his environment and the life around him. For Ustad Saami (aged in his mid to late 70s at the time he made this recording) to be able to do this, he underwent virtually a life-time’s training in his particular style of singing, beginning as a child under Sufi master Ustad Munshi Raziuddin (1912 – 2003), a famous qawali singer and performer in his own right, who forbade him to speak for several years, instead communicating only vocally. As one result of his training, Ustad Saami’s style of singing and vocalising (a style of surti which features 49 notes in microtonal scale) is highly customised: he is the only living vocal practitioner of this sub-style of classical khayal singing, and it will die with him when he dies. As it is not possible for Ustad Saami to pass on his knowledge and techniques to another person – for one thing, the person has to be chosen when young and perhaps show evidence of a special talent for singing and the personality and character to match, even before undergoing training that we in the West would regard as barbaric – the aim of recordings such as this album and his previous work “God is not a Terrorist” is to preserve this knowledge and Ustad Saami’s message of hope and peace and mutual understanding for future generations.