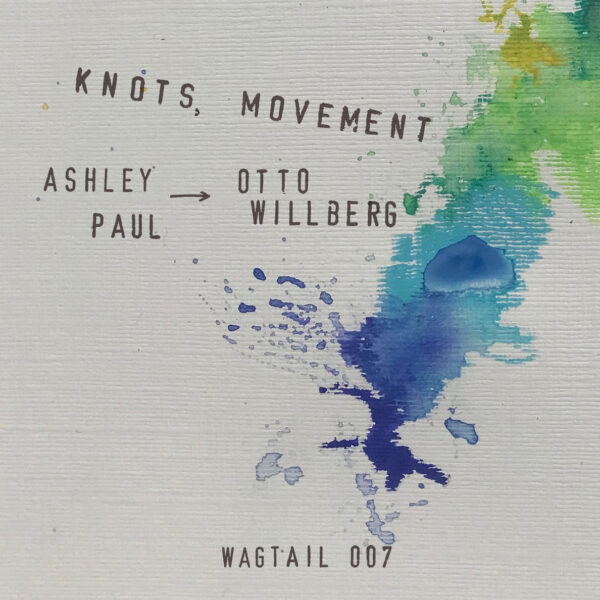 Very good to hear the fragile and hesitant work of Ashley Paul on Knots, Movement (WAGTAIL 007), a new release on her Wagtail imprint. Not sure we’ve heard from this great New England player since her Slow Boat LP in 2013, although she did appear on TSP Radio in 2015 (in a now-lost broadcast, sadly). She has played guitar on previous outings, but this live performance at Cafe Oto showcases her work with saxophone, percussion, and voice, and she’s joined by the bass and voice of Otto Willberg on four all-acoustic pieces.

Slow Boat was admittedly seven years ago, but stood out as an album of songs, performed on her terms and in her own exploratory manner; it might not be far off the mark to characterise these four pieces as songs, albeit very extreme examples of the song form. The voice, when it appears, is mostly doing wordless vocal tones and whimpers, almost interchangeable from the mournful plaint of her saxophone – although there are traces of lyrics on ‘Breathless Air’. Then again, when she takes off on a solo puffing jaunt and Otto joins in with sparse, arrhythmic plucks, the combined effect is not far apart from free jazz – a more refined, polite, and minimal approach to the genre, yet still steeped in raw emotional content. As ever, Ashley Paul’s recordings and performances are typified for me by their very stark and skeletal sound, with no clutter or unnecessary fuss. The music must stand or fall on its own merits, and she doesn’t give herself any place to hide on these honest productions.

Recommended to all fans of songs, acoustic noise, free jazz, and free improvisation. Arrived 3rd June 2020; one of a few digital-only items which were admitted to the catchment area during COVID lockdown #1.