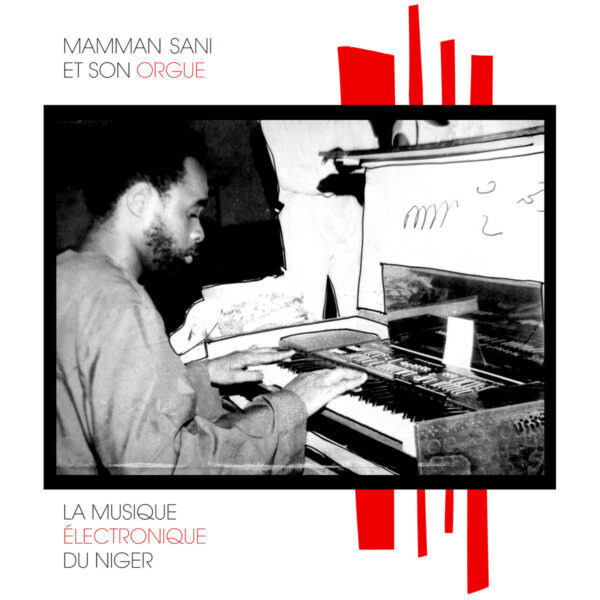 Almost as intriguing as these recordings of minimalist organ music made by Mamman Sani Abdulaye is their subsequent history and how despite making Abdulaye a household name in his native Niger they very nearly were lost forever. On acquiring an old Italian organ from a Rwandan UNESCO delegate in 1974, Abdulaye became obsessed with creating and performing music on the instrument, and in short order in the late 1970s he had composed several songs, based on the native music of his country and reinterpreting and reproducing ancient songs for a modern audience, for his first and only solo album which he recorded in 1978. In 1981 he took his organ and the album to the National Radio of Niger studios which overdubbed his album in two takes. Released on cassette, the album “La Musique Electronique du Niger” was a commercial failure but the National Radio of Niger adopted the songs as its theme music for the next 30 years, thus assuring Abdulaye his place in the history of contemporary / early electronic music in Niger. Many years after the cassette release, copies of the cassette were rediscovered in a cassette archive and the music was digitised on a portable recorder. “La Musique Electronique du Niger” was reissued on vinyl in 2013.

The songs on the album are a mix of original compositions and reinterpretations of some of the traditional music of groups such as the Tuareg and the Woddaabe living in Niger. The organ’s sounds can be quite unearthly, a bit on the shrill droning side and slightly nauseous: the instrument seems at once pop-kitschy in the way it does trills and a little bit melancholy in some of the melodies on opening track “Lamru”. There is an insistent quality in the organ notes and I can almost imagine the music being broadcast all over the planet by earnest aliens in an unseen UFO hovering close by, trying to warn us Earthlings of imminent danger from a passing asteroid. The melodies are very distinctive and when plucked have a slight acidic edge. An early highlight of the album is the unforgettable “Salamatu”, a love song Abdulaye wrote for an unfulfilled personal romantic relationship: the tremulous notes drip with yearning and feeling against a constant blocky beat. Later songs like “Kobon Lerai” and “Lidda” also have very idiosyncratic melodies, full of emotion, which create distinctly hypnotic moods and atmospheres.

Despite the very minimal style of the music – it is basically just Abdulaye playing away on his organ – it is very dreamy and mesmerising, and its emotional range can be quite astonishing: longing, slight melancholy and reflection are present. Each succeeding track is so different from the previous song that listeners can easily fool themselves thinking they’re listening to a new first track of a new album. The last song “Tunan” has such a different sound and style from the rest of the album – a bit sickly and treacly in tone, and the melody strangely reminiscent of Southeast Asian pop songs of the same time period (late 1970s) – that listeners can suffer a real shock when they hear the album ending.

This recording really is unique as an early example of electronic music in Niger in its style and range, and in its history.