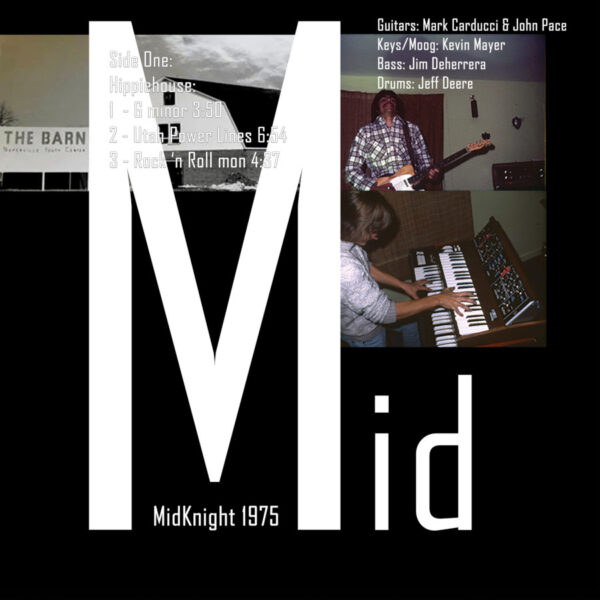 MidKnight 1975 (FTR 529) is a collection of tapes from a Chicago pre-punk band called MidKnight. Their lead guitarist, Mark Carducci, happens to be the brother of Joe Carducci – the writer and producer who was key to the success of SST Records in the period 1981-1985. I think Carducci’s official job title was A&R man, but clearly he went beyond the limits of a mere job description, and did much to establish the culture within which bands like Black Flag and Minutemen would thrive. Unsurprisingly, Joe appears to have been close to Byron Coley (who was producing Forced Exposure magazine at the time), and has always dropped hints about his brother’s “cool” 1970s band, mentioning he knew there were tapes around somewhere waiting for a release. While this sounds like the kind of project that could easily have surfaced on the labels Forced Exposure or Ecstatic Yod, it’s finally here on Feeding Tube Records.

Mark Carducci performs with second guitarist John Pace, plus Kevin Mayer on moog and keyboards, Jim Deherrera bass, and drummer Jeff Deere. There are studio / home recordings, and live tapes with a slightly different line-up. Loud and aggressive instrumental rock is the order of the day, unhinged riffing and a raw “driving” energy that’s hard to resist…while it’s true we can hear traces of underground progsters Hawkwind in their obsessive poundage, I can also hear King Crimson, especially on ‘Utah Power Lines’ whose main riff resembles ‘Larks Tongues In Aspic Part II’ spliced up with added experimental dynamics, malevolent chord shapes, and exciting guitar-keyboard interplay. The live tracks are slightly more conventional blues-based assaults and noodling, but the atmosphere is thick and intense (the recording quality helps) and fans who enjoy those official Mountain bootlegs will find much to enjoy here.

Coley’s poignant remark is that he recalls many bands of this ilk performing in American high schools in the mid-1970s, but there were few “who had the good sense to play without a lousy singer. Without some Robert Plant wannabe simpering over the top, you can get a real sense of how wild their sound was.” It’s a good observation; many an obscure UK prog-underground LP from 1970 or 1971 has been marred, for me, by an indifferent vocalist aping Ian Gillan or Joe Cocker, and getting in the way of the guitar licks or Hammond organ swirls. In short, if you seek raw and uncut rock guitar mainlining, check in here immediately. Gone Doing (FTR 540) by Sam Gas Can is a true oddity. We’ve heard this fellow once before on the Mystery Triangle record from this same label, released in 2012, which also showcased Paul Flaherty and White Limo performing at a record shop in Amherst. Gas Can – real name Sam Gaskin – has also played with Egg, Eggs and there are a number of obscure releases in CDR, cassette and single form under his name, since around 2007. Even this record is not especially easy to get; it’s a lathe cut in an edition of 30.

He’s a one-man band, singing and playing everything on this baffling 14-track collection of songs and instrumentals; he seems intent on demonstrating the many different musical styles and genres he can command, and is not afraid of being accused of pastiche. At least there’s an element of sincerity underpinning these divergent tunes and songs, unlike with the Canadian combo Tetrix who plunder the history of rock and pop mainly for satirical and ironic purposes. Sam Gas Can does cover versions of Bob Dylan and Captain Beefheart songs, effortlessly slipping into the vocal vernacular and instrumental styles that would be deemed appropriate for same. He also does psych-drenched guitar and vocal excesses like ‘N.M.P.’, Devo-styled songs like ‘White Baby’ with its awkward vocal delivery and eccentric keyboards, and just plain inexplicable art-rock instrumentals like ‘American Primitive’, two minutes of mysterious delight exhibiting a facility with synths and studio layering that ought to be the envy of more established artistes. There are also shorter tunes that wouldn’t have felt out of place on The Residents’ Commercial Album. Less keen me on the title track ‘Gone Doing’ which is his attempt at white rap; he lacks the attitude that’s required to pull this off, and his voice just sounds smarmy.

Overall though such lapses in taste are few on this album, and it’s mostly recorded and assembled in that DIY rough-edged and slightly distorted manner we love so well and which some American underground geniuses (e.g. Sebadoh, Supreme Dicks, Smog) have made all their own. Original, innovative.