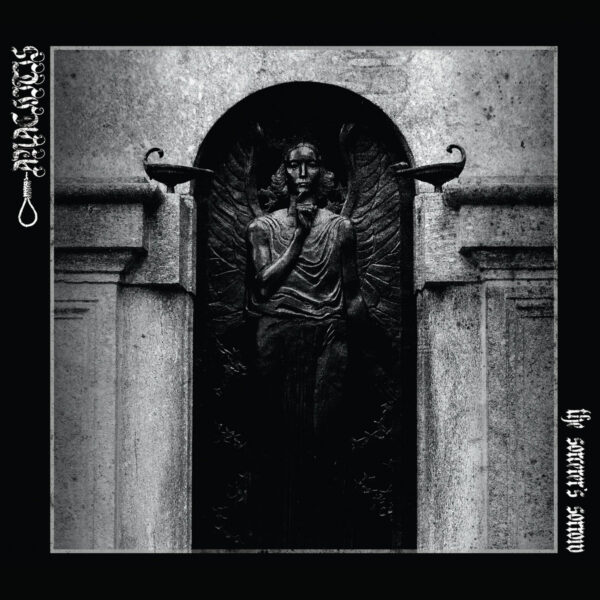 The sombre artwork for this, Anachitis’ debut release, caught my eye and I was intrigued to find out more behind the picture and the band behind the album. It turns out Anachitis is the solo depressive BM / doom metal project of James Sloan, guitarist for Oregon-based black metallers Uada, who play energetic melodic black metal. I confess to not following Uada’s work much but a quick look at their recent album “Djinn” on the band’s Bandcamp page would probably have convinced me (before I discovered Anachitis’ debut) that of all the Uada members, the one most likely to tackle a multi-instrumental solo project first would be fellow Uada man Jake Superchi. As often happens though, it’s the fellow you overlook for branching out who does what you least expect so it’s a good thing that to date no-one has ever hired me to read crystal balls or interpret cracks in cattle bones or tortoise shells. This brings me to Sloan’s choice of name for his project, “Anachitis” which refers to a stone (believed to be a raw diamond) used to summon and communicate with water spirits for the purpose of getting some insider information on what’s going to happen in the future.

Unlike your standard factory-model depressive BM album where the guitar is usually blizzard-like noisy and the howling vocals are all but swallowed up in the flying grit and rubbery blast-beat percussion, “The Sorcerer’s Sorrow” maintains the melodic BM style Sloan brings over from Uada, but with a grim and bleak atmosphere, plenty of dark, dark space and shrieking background voices that contrast with and highlight the clean lead guitar melody breaks when they occur. The guitar melodies carry all the melancholy and other sorrowful emotions, almost to the extent that everything else in the music which might be expected to convey the depressive mood and outlook ends up playing second fiddle in this respect.

The album’s theme suggests that even with access to and skill with esoteric knowledge, a sorcerer or an adept can still be no closer to finding solutions to existential pain and angst than the rest of us – if anything, the path of such a seeker can be even more dangerous and self-destructive than similar paths would be for novices. The torment seems even more oppressive and intrusive to those primed with the tools to deal with the pain and anguish. Through all songs, lost souls reach out for succour and the listener is constantly assailed by their screams and cries as Sloan navigates the difficult path ahead with distinct and often quite catchy guitar riffs and melodies. One early highlight of the album is Track 3 “Drowned in the Spring of Life” which has some good dual melodic guitar harmonies before the song takes a very downbeat turn. “Dead Spirit” offers snippets of hope and radiant light along with passages of soothing clean singing along with the rich chiming guitar harmonies and occasional soaring lead guitar.

The second half of the album from “The Sleepless Eye” onwards contain the longest songs and the best music: songs like “The Sleepless Eye” become trance-like, immersive mini-soundtracks of alternately hellish and soothing music, at once offering hope and succour, and just as quickly throwing listeners back into deep abysses. The style of music approaches the heights of tragic melodrama and can be quite varied and massive even though the range of instruments used is limited to guitars, bass and percussion. On occasions the music throws out beacons of hope and gentle light, and the clean vocals can be very soothing. These moments are short-lived and the depths of darkness soon return in all their heaviness.

While the songs in themselves are not that different from one another and are best heard as chapters in an overarching work, what really stands out in this concept album is Sloan’s skill in creating music that is at once seductive and graceful yet malevolent. The atmosphere is very bleak and desolate yet from its very depths emerge signs of hope and hints that one’s spiritual journey may have passed its lowest point and the path now points upwards towards the light. When the realisation hits that hope and the path towards the light are but dead-ends, the agony and the pain are all the more worse. This might not be an album that gets frequent rotation – because when it does get an airing, its moods and atmospheres are so disheartening that they are not quickly forgotten.