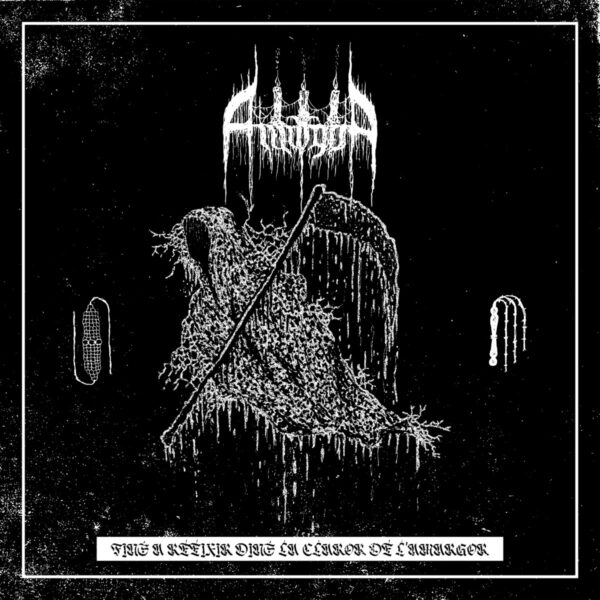 A one-man raw black metal project based in Barcelona, Amargor (the name means “bitterness” in the Catalan language) released its debut album “Fins a reeixir dins la claror de l´amargor” in July this year. All I know so far about Amargor is that sole member Manel Woodcutter plays drums in two other Catalonian black metal bands Collusion and Morta, and both these bands are fairly recent having formed in 2018 and 2016 respectively. Amargor’s style is raw depressive atmospheric black metal with a noisy and abrasive guitar sound that conveys harrowing pain and anguish. Lyrics buried deep under the gritty guitar noise storm and lots of deep reverb are sung in Catalan, not that this information makes deciphering them any easier for Catalan speakers as the deep-voiced singing labours under too many echo effects.

The album generally has a very raw and primitive feel, with basic production and plentiful use of reverb that gives the impression of almost cavernous sonic depth. There’s no bass guitar and (for a project helmed by a drummer) the drumming plays a very secondary role to the abrasive slashing guitar droning, sometimes to the extent where it almost disappears beneath the guitars and the groaning vocals. The guitar playing veers from long bleeding feedback drones to fast tremolo scrabbling and back again though individual songs are usually defined by repeating riff loops overlaid by the vocals. On at least one track “Passes doloroses cap a horitzons de ferides”, a thin reedy organ melody appears late in the music and continues all the way to the end. The most memorable track on the album turns out to be a very forceful rock’n’roll number “Llengües de foc s’alcen en la mirada” with a fast-paced chugging rhythm in parts.

Some good experimentation in the use of droning guitar and basic melodic keyboard tunes along with repeating riffs to develop a distinct and dark sound universe of never-ending pain and bleakness is present. Songs tend to be meandering sprawls of noise and primitive in their structures – riff patterns usually repeat again and again over near-industrial percussion beats with breaks for long droning wash or demonic roars – with the aforementioned “Llengües de foc s’alcen en la mirada” coming anywhere near being a self-contained and compact song with energy. The final track especially teeters on the edge of complete disintegration for most of its running time. While the exhausted nature of the vocals is intended to convey the bleak and hopeless state of eternal depression, the heavily treated singing does occasionally give the impression that the vocalist seems drunk and about to pass out in an alcoholic stupor.

While the album probably won’t gain Amargor a lot of fans, the project’s use of sound to create quite distinctly dark and brooding Gothic soundscapes merit attention. Amargor seems ready to play with its sound and style so future recordings from this project would be worth watching.