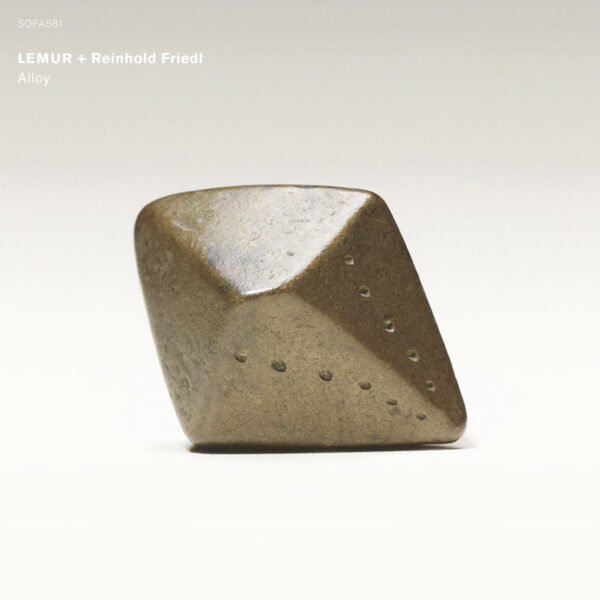 This collaboration between German pianist Reinhold Friedl (leader of Zeitkratzer ensemble) and improvising / composing quartet Lemur, sees both parties enjoying what I assume is an intuitive retreat from their usual, high-concept ventures, and consists of tonal and textural improvisations fashioned by extended techniques. The metallurgical ‘Alloy’ conceit depicts the results of different groupings as robust and presumably having some sort of empirical basis in a musical periodic table, with each participant representing an element in this scheme. These seven ‘Compounds’ are named with the neutral voice of a lab report but occupy different degrees on a spectrum of volatility. One downside of this view is that natural laws could be blamed for the occasional excess or aimlessness, although the analogy is not over-egged. It’s tempting to see the events as motivated by a kind of school-day fascination with chemical elements, such is the variety. It’s hard to say what works ‘best’, but I’m most drawn to ‘Compound I’, which rattles and thuds with near-chaotic abandon plus the odd sprinkling of piano (played and plucked), and ‘Component VI’, which realises the moodiest atmosphere of all by building the pneumatic pressure one might have heard as one of Giacinto Scelsi’s epic ensembles tuned their instruments. The macro-structure is one of tension and release, with the final arrival at a kind of dynamic equilibrium. Overall, the interactions are concise and inventive enough to sustain interest, although they may not offer much ‘surprise’ to improv lovers, if that’s what they’re after. Of greater continuity is this pairing of Kari Rønnekleiv (violin) and Ole-Henrik Moe (viola), who across 4 lengthy improvisations deliver some of the most symbiotic and immersive acoustic music that I’ve heard in many a month. Taking inspiration from the age-old custom of sitting around a fireplace, Rønnekleiv and Moe recorded the album in an old cabin in Norway, with one eye on the fire and an ear in the air. Now where one might rightfully expect an onslaught of shrill, high-end histrionics from this arrangement, instead we savour a long night of trembling suspense, with the two instruments virtually coiled around one another for the proceedings. The harmonic interplay and physicality of this feat are astounding and at times the players seem to merge into a single identity. One senses that removal to such an undistracting location heightened the senses to such a degree that a new level of detail became perceptible. The four titles suggest as much, referencing different types of wood and their physical properties in situ e.g. ‘Hearth, Red Gloom, With Lot Of Near-Ir’. Accordingly, their ear for microtonal minutiae is manifested in repetitive micro-gestures that resemble the sawing of trees into logs, with the connotation of sleep induction evident in the early pieces at least. However, with each piece the playing becomes scratchier and more threadbare, as though the repetition has peeled skin from fingers and strings alike. By ‘Great Spruce Log’ (just over 18 minutes) this has become a stamina test for listeners, but the pay-off is in the finale: ‘Under-Ash-Embers, With Hints Of Green Light In Spectrum’: a glowing ember of a piece, nonetheless contiguous with those preceding. All told, perfect listening for the hibernation season.