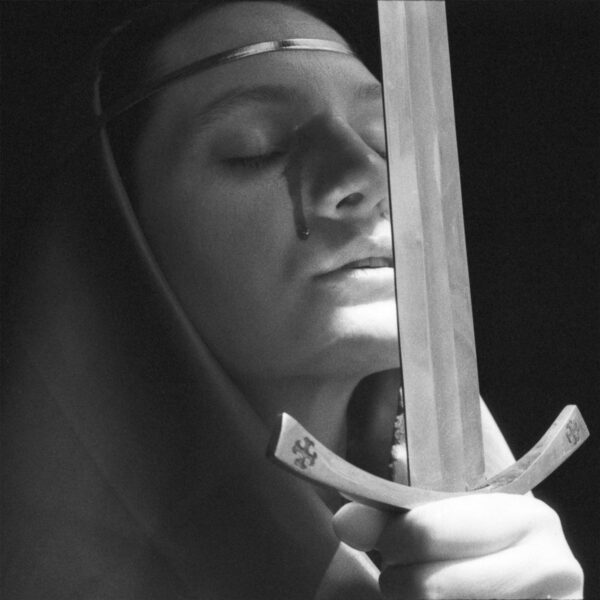 Starting out as a solo raw black metal project helmed by one Fossoyeur (formerly of fellow French BM band Chambre Froide), and releasing a self-titled debut album in 2018, the wonderfully named Sainte Marie des Loups (Saint Mary of the Wolves) expanded to a trio for follow-up album “Funérailles de feu”. Listeners can treat this recording as an introduction to the band and follow on from there.

On first listen the album sounds very lo-fi and punkish, with fast tinny guitars and skittish papery percussion, and seems like a throwback to early 1990s second-wave black metal bands like Dark Throne and the French Black Legions acts – but repeated hearings reveal a much more polished, even airy presentation with a production that allows most instruments to be heard clearly. While both gruff vocals and music bang away as fast as they can, on the early songs at least, and there is some competition between the singing and the backing music, they don’t sound as if they’re fighting each other. “Anciens serpens” and “Meurtrières” pass smoothly if a bit too efficiently, though the second half of “Meurtrières” where the music slows down and develops some real growl with background synth accompaniment gives a hint that the band has several tricks up its collective sleeve and knows how to steer folks into controlled bedlam. The title track also opens as a typically primitive raw BM song but half-way through expands into a sprawling instrumental prog-rock number with synth-wash drone and doomy seesaw guitar riffs. After a short passage of duelling lead guitars, the song remembers what it was and returns to fast-paced melodic old-school BM. “Dans les yeux de Méduse” goes for a more sedate chugging doom pace with headbanging riffs and brief outbursts of guitar hell mayhem.

The rest of the album follows in similar style: songs that start out as aggressive minimal melodic BM pieces going off at unexpected musical tangents and expanding into various genres of metal, rock, mini-opera or whatever takes SMdL’s fancy, all giving the impression that beneath the neo-primitive raw BM surface lies a seething, churning universe of sonic Chaos, in its original definition and concept as the first created or known being from which Order and all the known or possible gods of humanity emanated. While the songs are built very well, with an emphasis on catchy riffs, and the guys are always on the attack with exuberance all the way through the album, my feeling is that maybe the music and the production are a bit too professional and smooth, and the music needs to give a sense of being about to fall apart. That might mean an even more aggressive and hostile approach on some songs, giving way to doomy operatic singing or melodramatic keyboard sprawl or whatever other music intrudes that contrasts very strongly with the band’s core BM style.

Listeners might be tempted to pass on this album after a couple of casual hearings, and admittedly it doesn’t come across as a very remarkable work in its technical minimal presentation. Paying closer attention reveals a richer soundscape beneath the 1990s-era old-school retrogression. It’s as if the musicians are questioning the history of black metal and investigating where it could have gone nearly 30 years ago, and drawing out the rich music that could have emerged then and is only just coming out now.