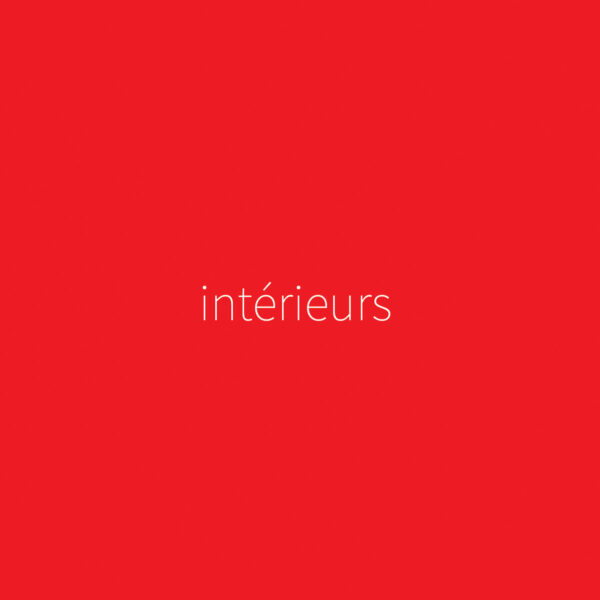 Latest release from French sound artist Éric La Casa is called simply Intérieurs (SWARMING 013), and comprises field recordings he made inside various rooms and interior spaces in and around his Paris home.

It might be my imagination, but is his work getting progressively more reduced and quieter with each new release? We previously heard him teaming up with Eamon Sprod for Friche, recordings based on ideas of reprocessed junk and garbage, but today’s item is perhaps closer in spirit to Paris Quotidien which we heard in 2018. The basic proposition of today’s record is simple enough; La Casa declares that he spends most of his life indoors, and lists various locations around Paris where he’s often to be found (including public places like the shopping mall, library or cinema as well as his own apartment). He wants to investigate them and their meaning in some way, as he ponders on the meaning of architecture and how it places him inside his own “personal ecosystem of the city”. What’s interesting is that he sees this as slightly problematic, something that’s in need of investigation and interrogation. He does it with documentary recordings, asking himself the question “what is this reality made of?”

One key word – whose meaning I had to look up – in these investigations is “liminal”, which can have several applications depending on the context, but I suspect the meaning most fitting to this case is to do with “standing on the threshold”, suggestive of passing from the outside to the inside or hovering around in the doorway, wondering what events may await us as we weigh up the situation. For this record, he’s divided the task into three zones – his own apartment, the atelier or studio of Michaele-Andrea Schatt in Montreuil, and the Louis Vuitton Museum in Paris. Further, each track represents I think a quote or a reworking of previous recordings he has made and published, from 2011 to 2018. For instance, the ‘Atelier’ piece references Low Velocity Zone from 2011 and Everyday Unknown from 2019. As noted with Paris Quotidien, what stands out is that La Casa isn’t especially preoccupied with unusual or “interesting” sound recordings, and in fact most of his subject matter can, on the surface, appear extremely banal and even boring.

It is this very quality however which gives his recent work its power, its tension; my sense is that the tension arises from the context in which he’s making the work, all of which is founded on the crucial relationship between himself and his surroundings. This isn’t to say that to fully appreciate this record, you have to “become” Éric La Casa; but you may need to participate somehow, conducting your own investigation of these surroundings, and ponder your own relationship with these blank walls, these empty settings. Yes, he is not afraid of “the void”, and indeed he actively wishes to face up to it, try his luck and answer the riddles of the Sphinx as he looks the oracle in the eye. All of this puts La Casa in quite a different place to Francisco López, mnortham, Slawek Kwi or indeed any phonographer who has documented an interior space (and there are several of them). The difference is that they are mostly looking for a beautiful texture, audio event, or sound world which may have been overlooked and which they wish to frame and re-present for our aesthetic enjoyment, be that an air-conditioning unit, the motors of a lift shaft, or the background hum of traffic in the city. Conversely, La Casa is in pursuit of something much less tangible, where the most important element is not necessarily the sound being made, but the context in which it’s heard and understood.

This takes us beyond mere phonography and sound art, into some more abstruse, quasi-philosophical realm, to do with the contemplation of emptiness; a record alone might not succeed in carrying or delivering all of this meaning, but you have to admit he’s aiming high. From 25th June 2020.