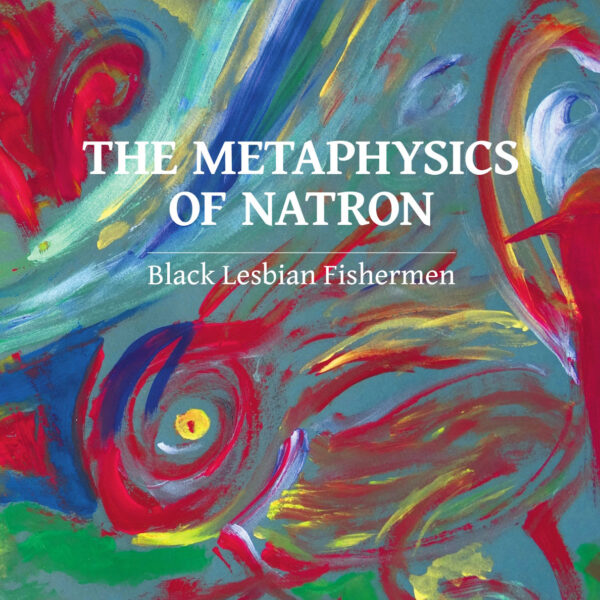 Got a vinyl LP from Black Lesbian Fishermen, a five-piece combo who operate out of Athens and Evia in Greece, and the record The Metaphysics of Natron (UNDERFLOW 06) was released on Underflow (a record store and art gallery in Athens), and sent to us via AntiClock Records.

Six tracks of rather compelling and deliberately ambiguous art-rock result from the meeting of these five musicians and singers; the instrumentation is good, since it’s not all guitars and synths, but also includes the flute work of Stelios Romalliadis, and numerous tape treatments or studio processing from Nikos Fokas and R Loftiss ensure that the general sound-world is always nudged left of centre. Loftiss is the only name I’m at all familiar with – she’s also the main member of Gray Field Recordings from Oklahoma, but we haven’t heard from her since 2003 and the album Sing 99 and 90. Gray Field Recordings, as I recall it, specialised in a form of layered semi-dark drone music, which is one of the characteristics of today’s record, and also showcased the poetry of said Loftiss. She’s the main vocalist on The Metaphysics of Natron, and matters have moved on since 2003 to the extent that she now sings instead of just reciting poetry, but the lyrics remain obscure and impenetrable as ever. This works in the context of what the Black Lesbian Fishermen are attempting, which is a form of experimental avant-rock with lots of ambient droney layers; the songs, or tunes, are ingeniously intercut with the imperative to make art-based noise, and interesting tensions result.

Two of the players are also members of Vault Of Blossomed Ropes, and Alan Trench (guitar, voice, synths) has connections with the cabal of esoteric weirdoes on the World Serpent label; he’s also a member of Temple Music, and has appeared on records by Nurse With Wound and Martyn Bates. The band also claim involvement with other members of the influential United Dairies thing, including Current 93 and Coil, plus noisy beasts Whitehouse and the mystical percussionist z’ev. The Metaphysics of Natron is much more “approachable” than most things associated with that checklist however, which may be attributable to the song-based approach as noted above; they’re not afraid of melody, and indeed one tune ‘Third Rubric’ could almost pass muster as a lost New Wave tune from 1979 with its catchy, though discordant, guitar and organ licks making it sound like the lost surfer song the B-52s never wrote. Black Lesbian Fishermen keep the “dark” and abject elements at arm’s reach; it’s fairer to say that the general tone is simply ambiguous and odd, without being especially nightmarish or threatening, and the lyrics of Loftiss (assuming they are hers) are a large part of this quasi-surreal vibe. Even though the texts are printed on an insert with the record, one is still charmingly baffled by these bizarre images and stream-of-consciousness texts, some of them vaguely influenced by ancient literature, e.g. ‘To Sic A Goddess’ might be referring to the ritual steps involved in an animal sacrifice.

Two extra tracks, including the oddly-titled ‘Pigs Before Strawberries’, are available to those who purchase the digital download version. Their previous LP was Ectopic Apiary (from 2015), and more of their work can be found on The Hermetic Library and Sombre Soniks. From 4th March 2020.