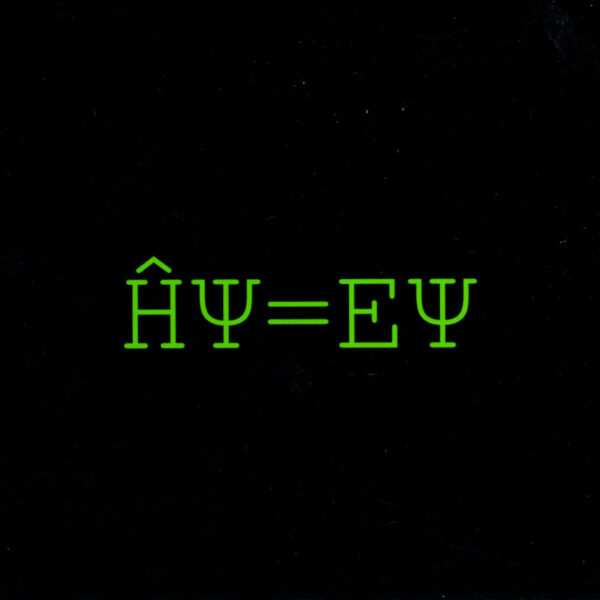 Eigenwert (ANALOGMusiq amsq123) was made by the team of Worsel Strauss (keyboards) and Schani Wolf (electronics, guitars), working in Frankfurt. The pair seem to be old friends, and have recorded and worked together under other names in the past, but this is their first record as Strauss and Wolf. Worsel Strauss had a couple of electronic records on the Vicmod Records label. Eigenwert is certainly not “minimal” electronica, and indeed the duo work hard to give you plenty of toppings on your ice-cream scoops, along with very eventful sequencer patterns, lively beats, and semi-melodic tunes. To put it another way, they’re not out to project a very experimental vibe, nor alienate the listener with cold, inhuman tones. I see there’s a sizeable equipment list printed inside the cover, and I would imagine the CEOs of Roland, Yamaha and Korg and other corporations have dollar-signs in their eyes. Eigenwert is entertaining, but not especially inventive; the keyboard sounds are often rather over-familiar and even a little cheesy in places, and although the upbeat mood and brevity of the tracks are very welcome, the tunes are under-nourished in the compositional department. From 29th June 2020. Understated jazz compositions from Rob Clutton Trio on their Counsel of Primaries (SNAILBONGBONG RECORDS SBB007). Karen Ng plays alto saxophone, Nick Fraser drums, and Rob Clutton plays double bass and composed the 10 pieces on the CD. They’re based in Toronto and have a lot of connections in several music scenes in this part of the world, particularly Clutton who’s regarded as “a central figure and an eccentric outlier within the Canadian jazz and experimental music landscape” for the last 20 years. The music here felt a shade too poised and refined for my tastes, though there’s something to be said for the ultra-cold ‘Sterling’, which is a restrained exercise in long tones played in a wistful fashion and exudes a distant, alienating feel. The remainder of the album is far from upbeat, even when they attempt a jaunty swing-feeling tune like a scaled-down version of 1958 Ornette, but the strength of the group is reinforced by the taut, simple compositions, which afford Fraser and Clutton a chance to build their skeletal, syncopated exercises, where elliptical gaps are the order of the day. I’d like to engage more with the sax work of Karen Ng, but while one can admire all her technical prowess – her immaculate tone, the precision of each note, the controlled vocabulary – there simply isn’t enough passion or feeling in her music for me, and I’m not carried away on the expected journey. One of four Canadian contemporary items sent to us by Nick Storring in Toronto on 15 June 2020. On L’Incertitude (CRÓNICA 157-2020), we have the pairing of two very productive Europeans Bruno Duplant and Rutger Zuydervelt, collaborating together for the very first time and producing two long sides of music / sound on a cassette, whose titles might be tinged with existential doubt. French composer Duplant often comes our way via the Rhizome.s label, a home for ultra-minimal and very challenging compositions, and we recently heard him team up with Pierre Gerard on the Soleil Clandestin record. Based on past performances, I tend to imagine Duplant is quite remorseless and ruthless in executing his cryptic, inscrutable plans, which may be why I found L’Incertitude surprisingly approachable and accessible. I shan’t say that it’s a tape packed with calliope tunes and exciting beats, but neither is it an example of his characteristic severe blanked-out style. To put it another way, there’s plenty of content and the content keeps changing. There’s also a user-friendly dimension to the work, which might be attributable to the Dutch drone-maestro Zuydervelt; whether recording as himself or as Machinefabriek, this very talented and able fellow always manages to arrange his layers and his collaged elements in patterns that make sense to the listener, even when dealing with quite abstract subject matter.

Even so, L’Incertitude does manage to insinuate that aura of metaphysical doubt, that grain of sand in the machinery, to bring us closer to that existential frame of mind so prized by every self-respecting French intellectual since old “laughing boy” J-P Sartre ruled his quarter of Paris with an iron rod of the mind. Sonically and musically, I think we get to that point through the wilful combination of unexplained and unusual elements (including a goodly dose of field recordings and found tapes) in among the musical drone which meanders like a babbling brook – unless it’s the water recordings that have planted that suggestion in my mind. In fine, our two composers see life as strange journey whose purpose is unclear, but it’s not a pointless one; and they make their observations in a spirit of genuine enquiry, without ever alienating us with cold tones or threatening minor-key drones. The label notes want to stress that D & Z arrived here through an extremely natural and organic process, based on intuition and mutual trust, without any intellectualising, pre-planned charts or discussions, and we’re all richer as a result. From 22nd June 2020.