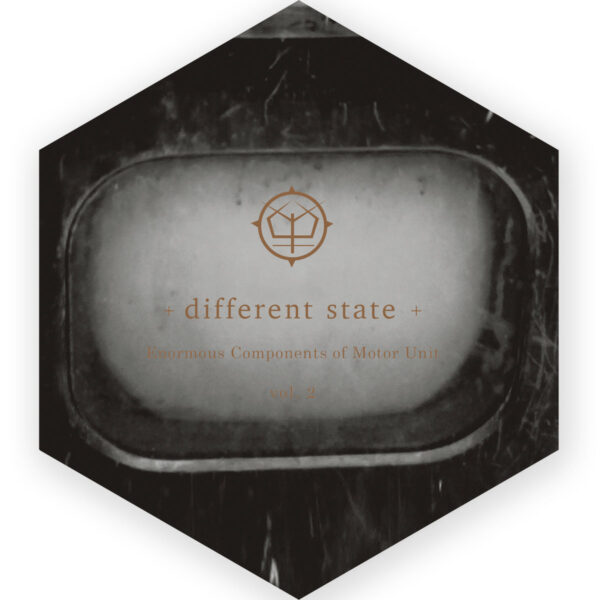 Here is Enormous Components Of Motor Unit Vol. 2 (ZOHARUM ZOHAR 199-2) by Different State, the follow up to his Vol. 1 which we received in March of 2019. Like its predecessor, the record is housed in a hexagonal fold-out cover covered with murky and menacing black-and-white photos and details from same, mostly hinting at esoteric matters or finding symbols hidden in every dark corner of the everyday world.

This is the work of Marek Marchoff, and it’s mostly a solo turn which he uses to express those unsayable things he can’t address with his dark-folk magick trio of murmured gloomery, 23 Threads. Psychological doubt bordering on abject terror is the lot of those who hear these Enormous Components. Apparently Marchoff recorded the basic tracks in 2019 around the same time as Vol. 1, but today’s release is intended to be more “raw” and “coarse” (to lift two buzz-words from the press release) and make more use of loops and beats to advance the broken visions of psychic chaos which he’s intent on depicting. Marchoff is hell-bent on communicating something – there are a lot of words on this album, either sung or recited or just plain gasped out from wretched lungs of a consumptive – and while it’s far from clear what the content might be, there’s no mistaking the hollow and wasted tone of that haunted voice, no matter how distorted it might be by layers of studio transformations. It’s an extended meditation on the end of the world, or the futility of everything.

As ever, a tremendous amount of exciting detail can be clawed out from the electronic musical parts, with drones, samples and snatches of instrumentation arranged in unusual highly-edited layers, often creating quite startling effects. The ambiguous, atmospheric tracks (I especially like the one with the owl hooting) are balanced out by the more aggressive experiments in noir-tinged and demented trip-hop. Your Motor Unit will never need another tune-up again after this cracked assault. (25/06/2020)