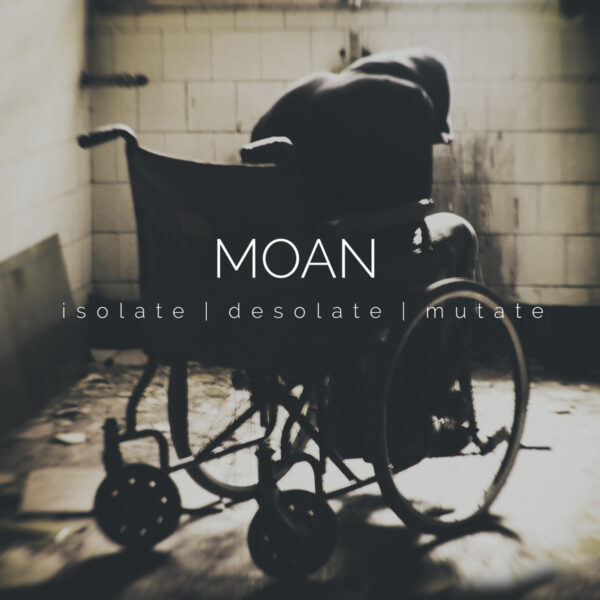 Moan is someone we last heard in connection with a couple of Genetic Transmission records, Collaboration 1 and Dedicated To Luigi Russolo, both released on this same label and noted by us in 2018. Boy, were they grim albums. Moan (like Genetic T.) is something of a veteran held in very high esteem within this genre, and his first record Thoughts Grower came out on cassette in 1996, starting a chain of bad toxins from which the world will never recover. He himself put out Isolate in early 2000 as a CDR (this reissue is explicitly intended as a 20th anniversary of that landmark event), and with track titles like ‘Void’, ‘Zeroing’ and ‘When Dream Doesn’t Come’ one has the impression that Moan is preoccupied with the occluded and unknowable side of the mind, staring boldly into the emptiness that surrounds mankind’s existence, and issuing suitably despondent plaints. While it’s a harrowing listen, full of coldness, despair, and paranoia, one does admire the single-minded manner with which Moan pursues his quarry, never afraid to subject the listener to a monotonous experience and take it well beyond the usual endurance point.

As “industrial” music goes, it’s also surprisingly free from hammering noise and evil bombast, and instead it tends to induce its dismal life-sapping effects by patiently working away with unsettling, chilly drones and claustrophobic repetitions. One very effective piece is ‘Work Report #356’, which in both title and sound evokes a familiar science-fiction scenario of an utterly dehumanised future state, along the lines of THX-1138, faceless workers lined up in cubicles and seen on blurry video monitors; it creates this impression with its distorted samples of radio voices and static. Tacked on the end of CD one are three tracks under the heading Desolate; these are from the latter end of 2000, and originally appeared on Soulworm Editions as a mini-CDR. Desolate was intended as a thematic tail-piece to Isolate, but goes one step further into the zones of darkness with its intent to dismay, upset, terrify and generally traumatise the listener. The original cover art (not reproduced here) confirms this strategy, with its horrifying image of a flayed human being looking quite wretched in a landscape of typical industrial waste. It’s clear that Moan finds some aesthetic beauty in all this desolation, and what’s more he does at least make efforts to communicate what he sees in his art. I found Desolate has a steely hardened edge, and is a bit more focused than Isolate, as if the Moanster were getting more adept at controlling his elements and deploying his forces to greater effect.

For the Mutate CD – Mutate isn’t perhaps the most inventive title for a remix album, but there you go – we have 11 artistes doing the remix thing for ‘Void’, ‘Endymion’, and other tracks from the 2000 releases. They are mostly Polish ambient and electronica types, and besides Genetic Transmission the list includes Job Karma, Dead Factory, Blare for A, C.H. District and Maciek Szymczuk. Largely forgettable, mediocre drones and identikit rhythms are the result, with a couple of exceptions: Job Karma, who livens up the dreary ‘When Dream Doesn’t Come’ with beats, threatening synth melodies, and crazed voice samples; and Genetic Transmission, whose take on ‘Desolate’ results in a 14-minute epic of alarming, dynamic noise, made all the more effective by its use of voice fragments which keep on cutting out at the crucial moment. (25/06/2020)