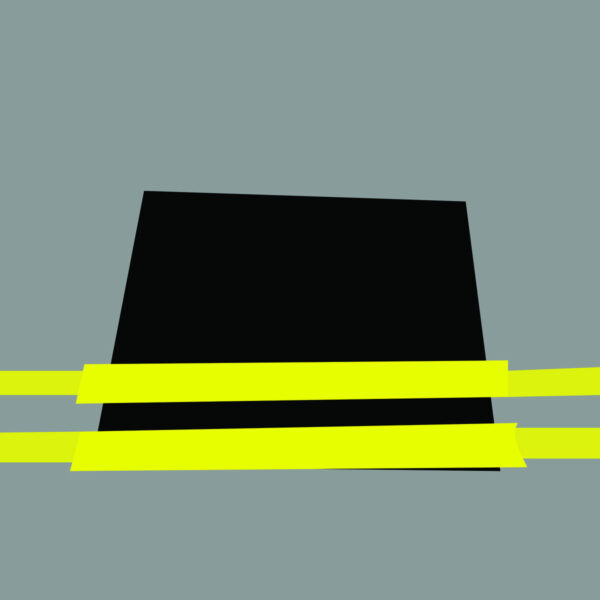 Latest album from Steven Ball is the cassette All Living Can Anyone Be Here (LINEAR OBSESSIONAL LOR 143). Last heard from this English musician with 2019’s Abstract Vectoral Landscapes, and in appraising his project for the last three years I have perhaps tended to foreground his technique – what I regard as Ball’s plan to deconstruct conventional song form, each time going a bit further to reduce a song to its bare minimal constituent parts and presenting greater challenges to the listener.

This time though, it’s the content that really shines through. I would say he’s getting closer to the ideal form of expression for this somewhat bleak outlook on life, and at least half of this album has a boldness and assurance in the way the material is constructed and delivered that is impressive; previous albums may have appeared tentative (though probably not intended as such) with their faltering, half-spoken vocals and slow-moving instrumental parts. For All Living, it might be that Ball has found the perfect theme, or set of related themes, as he adds the latest chapters to his description of a quiet English apocalyptic landscape. Two of the songs here refer directly to the COVID-19 pandemic and ensuing crisis, especially as it obtains in England; the best one of these, ‘Private Ambulance’ is a skeletal construct of broken phrases and despondent guitar stabs, delivered with an icy countenance that lets you know this is a serious matter and the singer is not kidding. It’s also shot through with a breathing sound (the amplified affect of breathing into your own face mask) that, sustained for 12 mins, is positively harrowing.

The other virus song ‘Even on a Wednesday’ isn’t quite as strong as this on-the-edge drama, but still contains an unsettling sting in its meaning, as it depicts a mind more or less unravelling during lockdown. We can’t remember what day it is, what we did last, what we will do next; we lack motivation, and nothing has any meaning. Widening out the theme is the title track, which may be a more generalised reaction to news reports, politics, and the general miasma of obfuscation and lack of clarity we UK dwellers have been living through since March 2020; the singer, Ball himself or a fictional political everyman, acts out the disconnected thoughts teeming in his brain as he regurgitates fragments of media verbiage until they become a meaningless jumble. We don’t know what to believe, the goalposts of meaning keep shifting, and all signs have equal value.

In all these songs, I think Ball’s achievement has been to evoke a very specific, confused state of mind; he does it not by detached commentary, but by experience, transformed almost directly into song and music. Up to now I’ve been reading the previous albums, especially Bastard Island, as some form of objective observational statement or critique, in the form of ironic reportage; perhaps I was entirely wrong. The other two pieces here ‘And On The Heath’ and the instrumental ‘Crossfields’ didn’t quite connect with me as deeply on today’s spin, but for the most part this is a very up-to-date, urgent, and heartfelt statement, indicating that the deeper the crisis, the better it brings out Steven Ball’s determination to produce relevant art. From 25th June 2020.