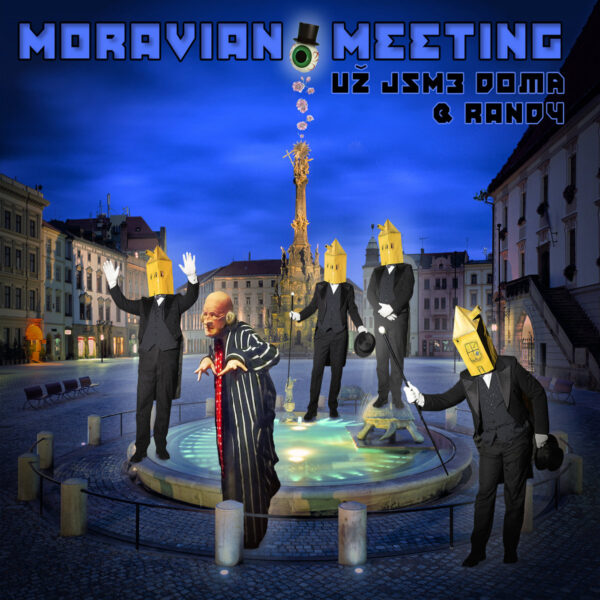 On Moravian Meeting (KLANGGALERIE gg328), you can hear the attempts of the noted Czech prog / avant-rock band Uz Jsme Doma to play songs and tunes by The Residents, joined on this occasion by “Randy“, the lead singer from The Residents. This tied in to a retrospective art exhibit in 2010 at the Caesar gallery in Olomouc, where artworks, masks and costumes associated with The Residents were on display; Randy himself happened to be visiting, and the opportunity for a musical set was too good to miss.

I suppose I must be too much of a Residents purist, but I found this album hard to digest. On the plus side, Uz Jsme Doma are a very competent band, and one with a respectable Rock In Opposition pedigree; they have their roots in punk rock (some of the members were originally in F.P.B., a punky protest band formed in 1980), and band leader Miroslav Wanek was covering Residents songs even then. Considering it was during the communist regime, I’d imagine this represented a very strong cultural pro-freedom statement – and to put it in context, he also drew inspiration from Pere Ubu, The Damned, and – erm – Uriah Heep. I don’t doubt for a moment his love of the music, nor his oppositional credentials, but the actual band are just too heavy-handed for this particular task. I do not care to hear my favourite Residents songs rethought as high-energy mainstream rock, even if played in a “quirky” manner; nor am I impressed by the conventional sounds on offer; the guitar pedal effects are especially distasteful, to say nothing of the excessive drum fills. Both of these aspects run completely counter to what The Residents’ music ought to be about; let’s not forget they were actively opposed to the monolith of mainstream rock music, undermining it viciously with the highly subversive and sarcastic Third Reich N Roll album, and the two singles that laid waste to the mythologies of The Beatles and Rolling Stones; and during their glory years, Hardy Fox never once settled for a “normal” sound in his music, or his imaginative and distinctive arrangements. These Czech players mean well, but they miss the simplicity of it.

I’m not swayed by the fact that singer Randy – i.e. Homer Flynn – added his voice to this project. Although it’s good to hear glimpses of an authentic Residents voice shine through on this record, this is mostly like a bad cabaret act or covers band. On the other hand, it’s possible this is what a “genuine” Residents show is like nowadays; I wouldn’t know, but it seems they’re still touring and appearing on stage, though one suspects that Flynn is the only original member remaining now. Even his disguise looks over-done to me; he has become a sad old clown. One would have hoped he’d exhibit a bit more respect for his own legacy, and that of Hardy Fox, but apparently not. From 22 June 2020.