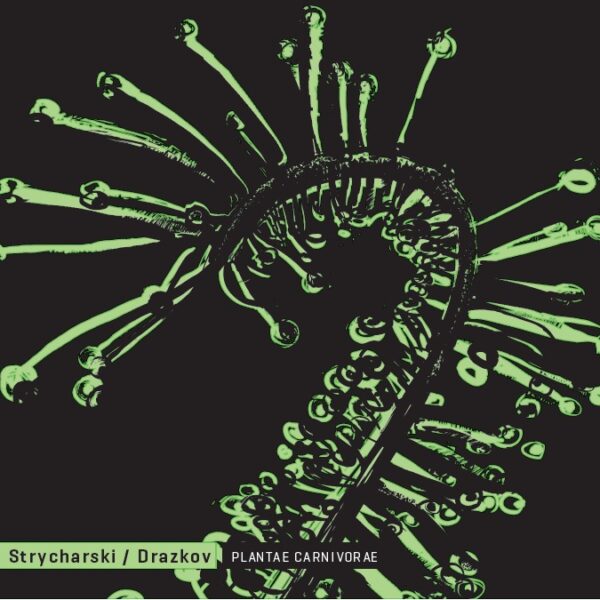 We heard from the recorder player Dominik Strycharski with his 2017 album Ghost, where he did a great job for the compositions of Louis Andriessen and also managed to make a pretty poignant statement about the role of harmony in modern composition, and commented on attendant dilemmas associated with same. Can’t find out much about this Polish composer and musician, although it’s unusual enough to find a recorder player these days, let alone one who plays it in an avant-garde classical setting. He also set up a Bandcamp page in April 2020, in which he showcased his “jazz and post-jazz” projects, indicating a wide musical appetite.

Today’s record is quite unlike the Andriessen album. Dominik plays recorders, but there’s also subdued electronics from his spindly fingers, and he also uses his voice; in his stiff, awkward manner he’s letting his hair down compared with the ruthless, rule-driven composition he played on Ghost. It’s called Plantae Carnivorae (BOLT RECORDS BR 1067) and he made it with Barbara Drazkov (sometimes known as Barbara Drazkov Drazkowska) a talented musician who is evidently a specialist on the prepared piano. She also works with electronics and has staged some wild performances in her time incorporating theatrical elements, including playing in total darkness with the aid of night-vision goggles. I’d like to say more about the concept, theme or intentions of this Plantae Carnivorae record, although it’s probably self-explanatory – there’s an image of one of these hungry plant-life monsters on the cover all set to devour anything made of meat or flesh that dares get too close to its evil tendrils, and the seven tracks are the names of various species of such botanical creepsters, including the Lentibulariaceae of the bladderwort family.

As is well known, nothing but trouble awaits the naturalist who dares to investigate the lives of these vicious leafy bastards, and YouTube is full of videos depicting human hands stripped to the bone in 17 seconds. Strycharski and Drazkov seem to realise this, and their music is accordingly understated and miniaturist in form, by which I mean there’s an abundance of tiny notes and ingeniously-crafted details. It’s almost as if they had been working with microscopes in the studio. Throughout, an eerie sense of alienation and drama lingers in the air, the situation growing tenser with every second as another layer of scientific discovery is peeled away. Percussive thunks, bizarre drones, unnatural shapes, uncanny recorder sounds, and occasional wailings and waftings from the mouth of the Domster; Tracks 5 is the best example of the vocalising, resulting in a track that sits somewhere between avant-garde piano jazz and opera, disrupted by many an electronic buzz and burr. When form and melody sometimes show up in these abstract meanderings, it’s like a guest appearance from the real world, while we’re still trapped in the sub-atomic zone, and a deliciously queasy sensation results.

We have had some experiments pass within these pages that make an effort to reprocess plant bio data into sound (see the cassette Bilocazioni, the side by Banished Pills; also the disappointing Silva Datum Musica by Plein Air), but this record is nothing to do with that process, instead comprising 100% composed-improvised-performed music by two gifted players. An oddity, but dare we say … it will “grow” on you…from 29th June 2020.