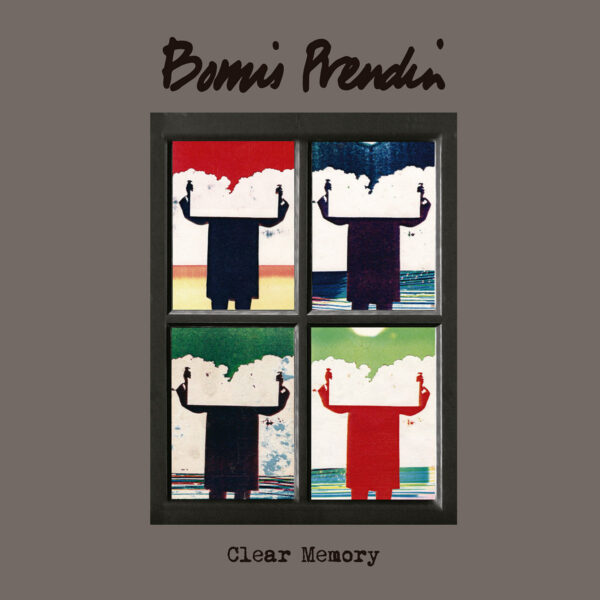 Here’s another reissue from the Mental Experience imprint in Catalonia (a sublabel of Guerssen) which specialises in finding rarities and obscurities for our enjoyment…at one time they seemed to be leaning heavily on progressive rock and krautrock from the 1970s, but the 1980s and cassette bands are also fair game. Today’s item is Clear Memory (MENT030) by the band Bomis Prendin from Washington DC, who originally formed in 1978, and may still be active; at any rate, there are a couple of 2011 split releases which may have come your way, including one on Psych.KG with Eric Lunde.

Bomis Prendin were an actual band, rather than one guy in a bedroom with a lonely synth, and may have numbered five or six members at one time; they worked hard to be experimental and unusual, embracing the DIY aesthetic that flourished so healthily in cassette culture, and used cassette tapes, hacked electronics, and toys alongside the slightly more conventional bass-guitar-keyboard setup. They also opted for odd formats; their first records Test (1979) and Phantom Limb (1980) were issued as 9″ flexi-discs and played for 25 minutes, a packaging decision that evidently got the attention of Nurse With Wound and got them added to the notorious “List”. After that, Bomis Prendin went down the slightly more conventional route of releasing cassettes, of which the first was Clear Memory from 1984 (released on the Artifacts label). There were only 50 copies (estimated) made and it was only sent to those in the “immediate circle”, which I mention as I’m always impressed how it’s possible to cause sizeable ripples in the culture with a fairly small footprint (or print run, in this case). Originals are rare and expensive now, so this reissue – the first time it has been reissued, mark you – on LP and CD is welcome, and on the surface this record will tip a lot of tenpins for listeners who like to roll strikes in the alley of 1980s oddball synth music, and whose appetite leans towards those Vinyl On Demand box sets from this period.

I found Clear Memory enjoyable enough, but somehow lacking in adventure. One can immediately detect influences from The Residents, and there’s nothing wrong with that, but the Prendin crew aren’t anything like as inventive in their song construction, and don’t go far enough with their “weird” sounds; most of the tunes just sound quirky rather than unsettlingly strange. They never get especially carried away or explore troubling emotions, instead maintaining a mannered stance, full of quasi-cryptic surface, and a very studied form of weirdness. My other stumbling block is the guitar player, who may be Miles Anderson, whose contributions frequently lapse into “straight” rock or blues-influenced licks, which in this context seem somewhat out of place and even a little corny at times. On the plus side, the keyboards of Bomis Prendin himself are often tasty and addictive, and he’s not afraid of embracing a “cheap” sound in pursuit of his musical aims. The beatbox, perhaps one that comes with a Farfisa organ, adds considerably to this “playtime” feel. I’d also liked to have hear them do more songs, as sometimes lyrical themes help me to get a handle on where a band is going, but they don’t do many of them here; however ‘Respect The Road’ is a good song, a nice low-key and slightly skewed take on a road-movie topic with implied subtexts of a Ballard-ian nature.

Hearing this makes me wish someone would reissue the catalogue of Radio Free Europe, the Texan minimal-industrial band who made one album and one tape in 1980. The reissue includes an essay by Klemen Breznikar and photos printed in the booklet. From 14th July 2020.