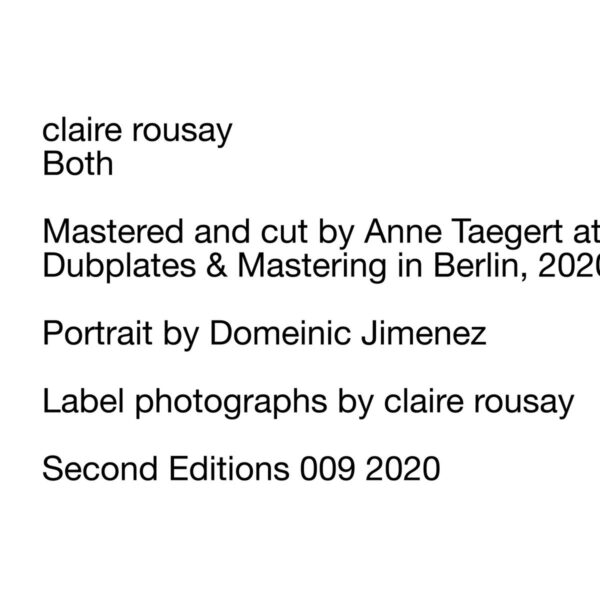 Claire Rousay‘s work may cross over into performance art and conceptual art to some extent, although she is an improviser and percussionist and has made a number of releases of her work, many of them released as cassettes on Astral Editions, Already Dead, and other labels. I mention the crossover thing as she is trying to make observations about society, specifically human relationships, and do it through the contemplation of physical objects and space.

That’s the bit I do understand; I confess I struggle a bit to grasp how sound can be perceived “always in relation to the self and the other equally”, as the press note has it. This American artist, currently living in San Antonio, is here today with a record called Both (SECOND EDITIONS 009) on the German label that released the awful recent record by Roger Tellier-Craig. It’s on vinyl and presented with a plain typo-heavy cover, though it seems that every record on this label follows a design template like this. As far as I can make out it’s two sides of field recordings, though it may not be quite as simple as that. The long side ‘Library’ was recorded was recorded in public at the Library in San Antonio, but it’s not a straight documentary; it seems she positioned an open microphone so it could be fed through two loudspeakers. Presumably this had the effect of “pushing” the ambient sound back into the very space was producing it. Additionally, there are electronic sine tones played back in this acousmatic set-up, which were “pitched specifically to the building’s dimensions and resonant frequencies.” I don’t fully grasp what this entails, nor what it implies, but my guess it that is has something to do with applying sound to the surrounding architecture in some way.

Already this feels more like an installation work, a very site-specific one, of the kind we used to hear a lot some years ago from Achim Wollschied. The device of reflecting or folding the environmental sound back into the site that produced it was also used by C M Von Hausswolff, except he did it in a rather aggressive manner, attempting through his intervention to reveal hidden things about the cities which he visited, often things which most people would rather not know about. On paper, this “curated arrangement” of Rousay’s seems convincing, although I’m not quite able to grasp how it amounts to a “conceptual composition”, nor can I perceive how it amounts to a “blending [of] architectural space and human interaction”. The human beings are in the space all right, but Rousay’s work reduces their chattering and meandering to empty background noise, almost as if she has no interest in the human race at all. Where’s the “engagement” we are promised? And I have heard other sound artists who attempt to investigate architectural space, for instance Philip Sulidae in Australia and Eric La Casa in France, who communicate a great deal more about the truth of buildings than Rousay on this record.

The second piece ‘Two Things’ is more successful; for one thing it’s far more eventful, and contains a lot of sonic drama, even a vague sense of excitement which the sedate library vista lacks. Familiar and unfamiliar sounds vie for our attention, recognisable real-world incidents jostling for space in among strange drones and static buzz. Human beings appear fleetingly in the smallest of aural glimpses. Apparently she made the whole thing inside an apartment, yet still captures a lot of the outside world (probably by sticking the microphone outside the window). I’d like to think this is a collage-construction, one of those drifty documentary recordings that floats around collecting what sounds it may and presenting them back to the listener to make sense of the jigsaw that surrounds us.

Convincing work on the whole, but not very innovative, and doesn’t quite deliver on the high-flown artistic claims of the label. From 1st July 2020.