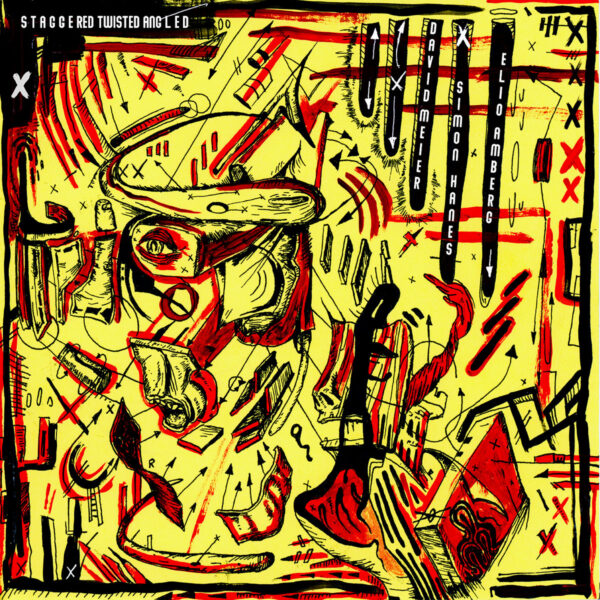 This young trio of tenor saxophonist David Meier, drummer Elio Amberg (both Swiss), and bassist Simon Hanes (USA), describe themselves as “…improvised, non-idiomatic and combines wild energy with a sharp compositional awareness and subtle use of sound…” The trio began in NY in 2018 while on a residency, and thus have achieved a fairly impressive and sturdy cache of chops with which to bludgeon our senses.

On Staggered Twisted Angled, they offer up seven dynamic improvisations with light-hearted, mischievous track titles. The opener, “Faced” consists of a single minded bass attack that spars with outraged saxophone. There’s some joyous electronic manipulations via some kind of newfangled loop-mangler pedal, possibly. The saxophone jars, the bass jabs, while the drums skitter along keeping the whole mess going in the right direction. “Splattered” presents an early contrast – a pretty, brittle miniature soundworld that gives way to imploding drums, uninhibited sax hooting and the bass guitar strings being violently forced up against the pickups. The nearly thirteen minute duration allows them the luxury of stretching out. Plus there is possibly some feverish Digitech Whammy action going on – other pitch-modulation devices are available – to keep all the tech-nerds happy. This is the aural equivalent of bee-keeping – some sweet rewards for the dedicated practitioner but not without the risk of intimidation and injury by an angry swarm. But then there’s no long Latin names to memorize either. Just hope you don’t suffer from jazzaphylapsis. Amberg’s fragmented, splattering drumwork here reminds me a little of the UK’s Andrew Lisle.

The third track is called “Hammered” Rather disconnected and shrill at the beginning, but steadily gains an uneasy unity, plus more speed and power as the piece progresses. The musicians make a fairly decent fist of it, but there are lots of other groupings out there right now that have the chops and cojones to make this sort of thing look easy. Kodian Trio or Han-Earl Park’s trio Eris immediately spring to mind. Could be it’s the start of a movement. Hanes weaponises his bass on “Drowsed” while the tenor sax hums distractedly. Amberg flips the snare off and pummels it as if it were just another errant tom-tom. Moments later it sounds like he’s playing it with his palms. I wasn’t expecting the sideways move on “Weirded”; here, the bassist favours a very bright EQ and brittle compression setting on his cranked and long suffering amplifier, and enjoys a little moment of Shellac-inspired introspection. This gees up the drummer somewhat who clearly also has no small amount of respect for Bob Weston and this mutual daydreaming technique works well against the fractured tone clusters and occasional feedback elicited by Meier’s saxophone. A roundel of whipped sax sample rounds the piece off nicely. Their approach on “Shaped” is one of quiet exploration to start, quickly devolving into manic noise-making. Nice. Halfway through it all falls away into a grey sonic mush where none of the instruments are recognizable, lit up towards the end by Hanes and Meier trading sparks. On the final piece, “Wiped”, rock-riff style hammer-ons are Hanes’ opening gambit here, and Amberg and Meier respond in the appropriate wigged-out way. Super-precise drumwork and wavering sax melt. Joyous.