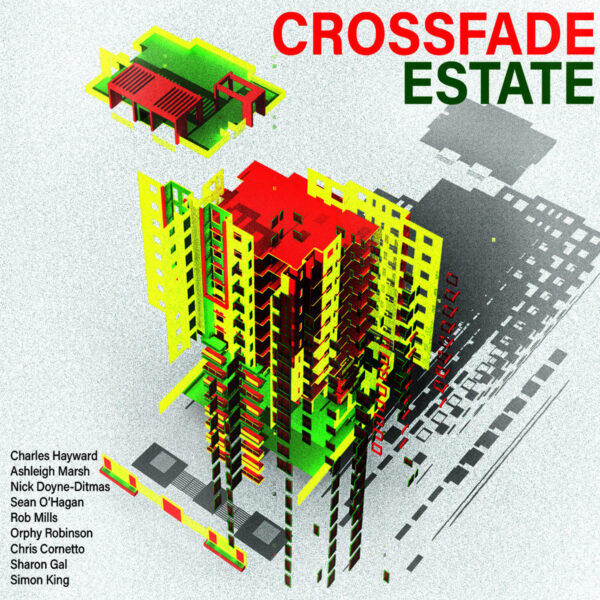 Crossfade Estate (KLANGGALERIE GG340) is a Charles Hayward project from 2005, now assembled and released by the Austrian label Klanggalerie. It features a large number of guest musicians, including the bassist Nick Doyne-Ditmas who made My Secret Alphabet with Hayward in 1993, and guitarist Simon King, bass player Sharon Gal, Ashleigh Marsh, Chris Cornetto, Rob Mills, and Sean O’Hagan – who I presume is the Irish fellow from The High Llamas and Microdisney. Hayward used to organise the Accidents + Emergencies events in Deptford, collaborative efforts that involved multiple players from diverse musical backgrounds, and we see a continuation of this on Crossfade Estate. The process that’s relevant is the use of pre-determined strategies to make music “happen” in a way that doesn’t involve laborious composition, or indeed anything which might tend to stifle spontaneity. One such technique is story-telling, a simple device where the musicians act like characters in a play or film, and in Hayward’s eyes Crossfade Estate is very like a soap opera, one might almost say his own radical take on the Eastenders format. This might lead you to expect a musical opera of sorts, but this is largely an instrumental album with very few songs and no recurring characters that I can see. Rather, the plan is to bring about a condition where music is “constantly at the crossroads”, where several divergent musical lines are marshalled together so they might intersect at crucial moments. This sounds great on paper, but I had hoped for a little more tension and dynamics in the finished item; the clashes and contrasts, if any, aren’t quite distinctive enough for my tastes. But there is plenty of variety in the many musical styles on offer, Hayward propels everything flawlessly with his watertight, precision drumming, and evidently the inclusiveness factor has been crucial to the musical success of the Estate. Thematically, we can detect hints at some of the societal discords, class wars, and general tensions among the populace which Hayward has explored so compassionately on his earlier Ghost Trade and Camberwell Now records. (20/07/2020) 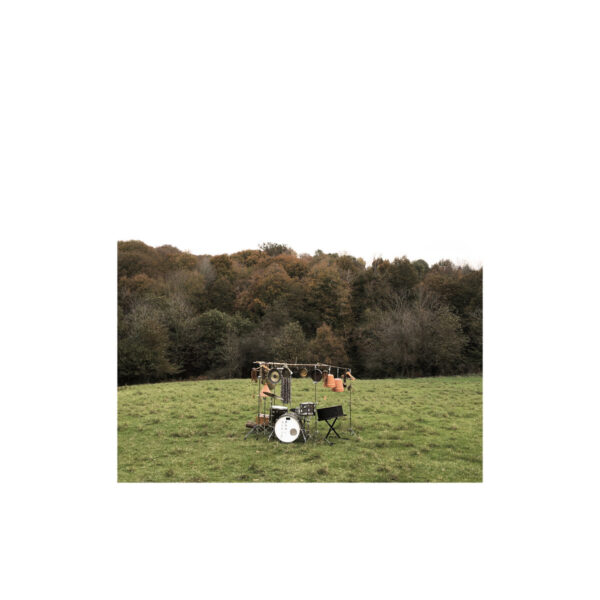 Solo record by the Turkish percussionist Berke Can Özcan is strangely affecting….his Mountains are Mountains (BOHEMIAN DRIPS BD012) is informed by a restless spirit and a melancholic response to the current sad state of the world, in movements and actions which parallel the life journey of Özcan himself. He’s played with Birds Ensemble, Konstrukt (that large free-music Ensemble who have produced some very impressive team-ups with noise and improv giants over the years), and Marika, but this appears to be his first solo record. It’s some way from being a straight “drumming” album, although there are beats; it edges closer to some personalised form of ambient-shoegaze music in its overall wistful and introverted tone, but is also notable for the large number of instruments and non-musical objects played by Berke Can Özcan. In particular, the use of kalimbas and an old harmonium are two choices which contribute to the gentle, faded sound and the nostalgic air; and any shopping list which includes home-made instruments constructed from flower pots and bottle-caps should endear itself to the open-minded listener. On the more metaphysical side, the record includes a real heart-on-the-sleeve array of emotional states that are reflected on this album – “sadness, passion, agony, curiosity, excitement, loneliness, bliss…”. The odd cover photograph suggests how he sees himself alone and adrift in the world, sailing in his drumkit which carries him like a small coracle on the ocean. And yet the music is not sentimental or self-indulgent, despite occasional lapses into something which might be perceived as 21st-century easy-listening lounge jazz, and there’s a real honesty behind this understated music. (20/07/2020)

English player Ian Arkley was the founder of Seventh Angel in the late 1980s, a Christian death metal / doom band with melodic overtones, and he also played in other UK doom bands Ashen Mortality and My Silent Wake in the 1990s (the latter may have had some Goth sentiment informing their music, but I never heard them). Arkley is here today with a solo record called simply one (OPA LOKA RECORDS OL2002) which he constructed at his home studio in Wales. It is truly a one-man effort – all instruments and voices by Ian, and he wrote the songs, produced the album, and did his own engineering. It’s also far from being Doom Metal by any stretch of the imagination, instead experimenting with ambient swirling mists, neofolk chants and pagan themes, massed choirs of mysterious men in the woods, and that sort of thing. No denying the performing and production skills of Ian Arkley, who lays down each track with assurance and pulls off many a complex layering trick with his overdubs. He takes pains to manipulate and process the sounds of his instruments in the studio, although to my mind he doesn’t really go far enough; the results are merely odd, when they could be eerie and unsettling. (20/07/2020) 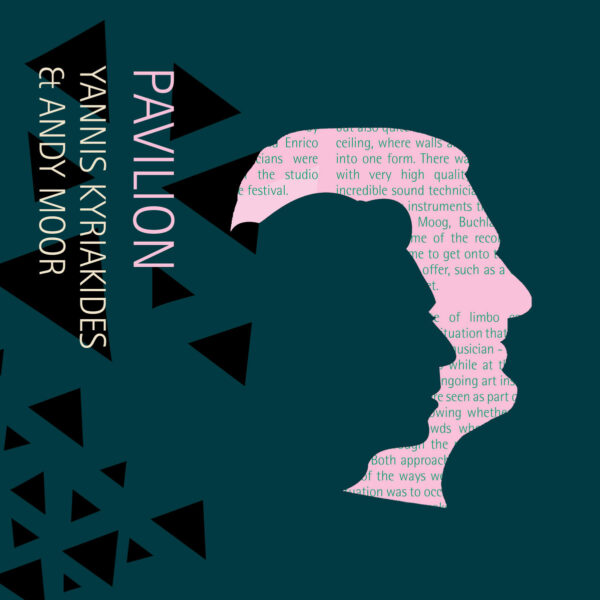 On Pavilion (UNSOUNDS 65U), you can hear two very good musicians Yannis Kyriakides and Andy Moor playing at the Venice Art Biennale in 2017. Yannis is a modernist Cypriot composer who has come our way numerous times on the Unsounds label with his imaginative and unusual approach to electro-acoustic composition; and Andy Moor, from Dog Faced Hermans, The Ex, and Lean Left is a unique guitarist who is increasingly moving down an experimental / improv route, it seems. We heard them as a duo last on A Life is a Billion Heartbeats from 2014, where they layered guitars and electronics on top of old Greek rebetika records. Today’s item is largely improvised though, using simple compositional blocks of rhythm prepared by the Greek half of the act, and it may even have grown out the unusual situation they found themselves in at Xavier Veilhan’s studio Venezia. They were allowed to experiment freely with the lovely Buchla and Moog synths that were installed, but as they did so they had the sense that no-one was really paying attention; there wasn’t an audience as such, rather a crowd of art patrons wandering about and moving on to the next exhibit. Maybe the duo felt like a living art exhibit themselves, in the mode of Gilbert and George. They certainly felt a bit isolated; one of them uses the metaphor of playing in the “middle of a busy street”, and the traffic of onlookers were, to them, no more than ghosts. Perhaps this is one way of interpreting the cut-out profile image that is on the die-cut cover. While the music may not be as adventurous as other Kyriakides projects, I kinda like the semi-structured feel of these meandering pieces; the sound is good, combining low-key electronics with scratchy guitar; and Moor’s playing is exceptionally restrained, as if he felt obliged to rein in his spikier tendencies. (20/07/2020)