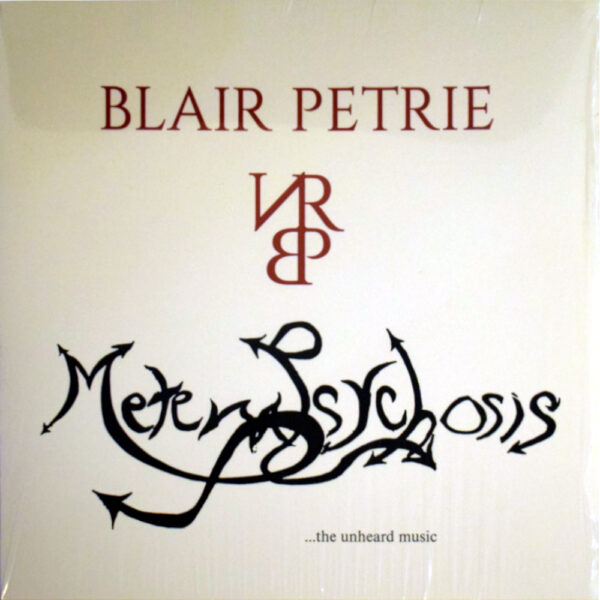 We received a copy of Metempsychosis…The Unheard Music (OBFUSCATE PERIMETER RECORDS Obfu 120002) by Blair Petrie. I think he’s originally from the West Coast of America but this arrived from Vancouver. Petrie had some early forays into music in the bands The Shriek, who made one New Wave mini-album in 1980, and also in Sexbeat whose sole 1984 single may have been a cross between New Wave and Goth (although the band themselves seem to have been trying for a New Romantic look on the cover). There were also some solo cassettes of Blair’s dark wave / industrial synth music in the 1980s.

Well, after a hiatus of some years, Blair decided to release this four-LP box set in a slipcase, which surveys a lot of his (presumably) unreleased music from the 1980s and 1990s, though there are some late 1970s items here too. I think it’s his own label and he may have financed the whole thing; besides the vinyl pressing, all the inner sleeves are full colour printed, and there’s a poster and booklet insert. The booklet has more photos of Blair Petrie than an average Facebook wall, and plenty of text about him too; diary excerpts, poems, ruminations and observations from his viewpoint, and biographical details galore. The song lyrics are also full of ego and posturing. I’m sensing this is something of a private-press vanity project, although there’s nothing wrong with that. On early spins, I found the whole thing grotesque, and verging on the unlistenable, but today I’m deriving some strange enjoyment from the very oddness of it all, and with over two hours of music and eight sides to spin, it’s just about possible to find something to catch your interest in amongst the sprawl.

The main drawbacks to listening pleasure are these: his awful tuneless singing voice; his heavy-handed performances on keyboards, guitars, and most especially drums; the general lack of melodic and harmonic progression in the compositions; and the utterly wayward production and arrangements. His main role model might be Gary Numan, spliced with a bit of Nick Cave histrionics, used in service of crackpot dark-wave synth tunes, New Wave upbeat songs like ‘Schizoid Kids’, and lengthy episodes of goth-tinged noisy guitar-mangling treated with nasty effects that induce a new cringe with every ineptness. Yet in some perverse way, these qualities are precisely what give the music its distinctive taste; assuming you like a thick, layered production, Petrie’s the man for the job, if only he didn’t insist on changing things up midway and charging off down an unexpected pathway, ruining everything with an explosive episode of unnecessary noise. You can feel this quite strongly on ‘Iodine’, for instance, which opens Side B; after a few spins it dawned on me there’s a half-decent constructed song in here, struggling to make itself felt through layers of instrumental excess and over-the-top studio craft. Also on Side B, I found another long instrumental whose creepy title I won’t reproduce here; he actually alights on some memorable abstracted noises here, and the whole thing has an insistent quality that gets under your hide after a while. But this turns out to be uncharacteristic of the rest of the album, and it is very creepy (not in a nice way).

From all the music and photos, one senses Blair Petrie can’t find, or settle on, an identity or an image he’s happy with; part of him clearly wishes to be perceived as an outsider or darkly troubled soul, yet many of the photos depict an utterly normal and forgettable face, wearing very ordinary clothes, in bland domestic surroundings; while the shots of him performing are rife with ancient rockist clichés, including a Pete Townshend-styled leap-with-knees-together while holding axe. I’m not sure if there really is an audience for all of this unheard music of Blair Petrie, but I kind of admire the way he’s gone ahead and put it out on his own terms; one senses he doesn’t give up easily. I’m tempted to keep this one mainly because it’s so damn bizarre. From 1st June 2020.