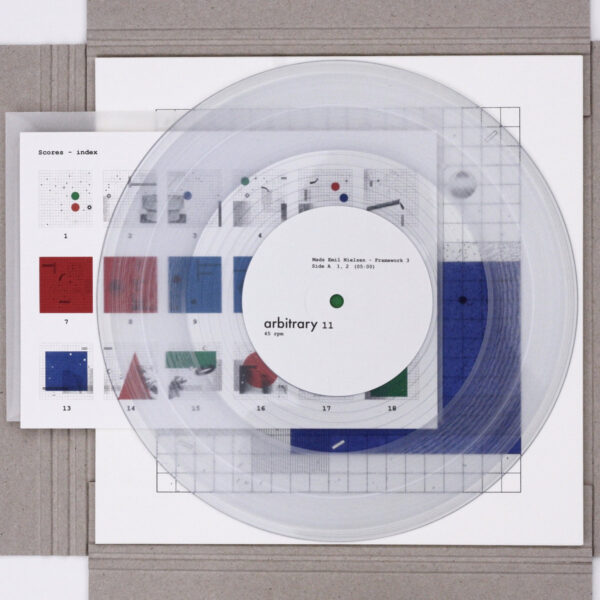 Danish composer Mads Emil Nielsen continues his Framework series with the third entry Framework 3 (ARBITRARY 11), this time teaming up with the musician Nicola Ratti and the visual artist Katja Gretzinger. As with the previous release, the item is distributed across two physical media – one 10″ slab of transparent vinyl, and one CD.

Nielsen’s interest is in the graphical score, that most elusive and disputed of developments in modern music, and his life’s quest is to find a way to apply a successful interpretation enabling the translation of visual information into music. What I’ve learned this time is that he relies on intuition to do it – “intuitively sonify” is his motto – and also that he comes from a family of architects, a fact which probably has some bearing on the way he looks at the world. Today’s record represents an interesting chain of production, taking us from Nielsen’s music to Gretzinger’s artworks, and thence to Ratti’s interpretations. Step one – drawings created by Nielsen in 2019, which he made into low-key electronic music for the first three cuts. The sound generation is about as abstract as you can get, formed from sine waves, feedback, synths, and loops, and some recordings he realised at the EMS in Stockholm. Step two – the audio was handed over to Gretzinger, who listened to it and made “visual notations”, a process that resulted in her devising her own symbols and grids to represent what she heard. If I’m reading this right, it could be a form of reverse-engineering – deriving a graphical score from sounds (sounds which themselves were based on graphical notation).

Not content with with evolving her own visual language, Katja Gretzinger brought in a few outside visual elements to collage into these artworks (material from old prints) and put geometric shapes on top of everything…creating thereby a lengthy and elaborate visual statement, in the form of an 18-page graphic score. If you buy the package you get a set of risograph prints in the bundle (which I don’t have in my promo copy, which is a shame as I’d love to see them). Step three – Nicola Ratti, the Italian musician from Milan, is given the Gretzinger score to interpret in his own manner. He did it in a very “spatial” way. He conceived an imaginary space, representing the distances between the three creators involved in this production; then he rethought Gretzinger’s images as objects, situated inside that imaginary space. If this feels a bit vague, it might help to realise that Ratti was trained as an architect too, and maybe like Nielsen he “sees” a building as music, and vice versa. His interpretation of the graphical score, or the reversioning of it, might best be understood as a 3-D model of a futuristic hotel, with Gretzinger’s visuals serving as indoor plants, decor, furniture, carpets and wall hangings.

Well, I like the process of passing the chain of interpretations and re-imaginings along down this artistic relay race, as it were, although the audible results are a bit underwhelming. One would hope that all these reinterpretations and differing viewpoints would tend to bring us closer to the truth of Nielsen’s original statement, but instead we just get a process repeating on itself for the sake of process. Ratti’s work is slightly more detailed and eventful than the highly severe blips and bloops of Nielsen, but the Italian’s output is also rather bland and vapid, emerging as a kind of twee audio wallpaper. From all of these architecture references, I was kinda hoping for something a bit more Bauhaus, rather than the lobby of a rather boring Premier Inn. From 4th August 2020.