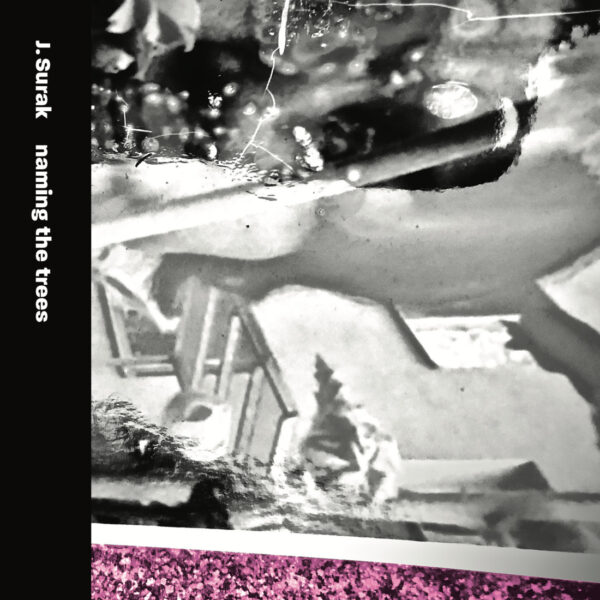 Herewith a number of releases from the American Zeromoon label in Washington D.C. All of these arrived 15th July 2020.

Naming The Trees (ZERO 192) by J. Surak is a concise art statement, just ten minutes a side on the limited cassette. Apparently produced by a combination of methods: analog synths, patches, treated and prepared instruments, and a humidifier – maybe a field recording of one of these handy domestic beasts, unless he “trained” its limited mind to assist in the performance in some way. Furthermore, it’s got something to do with a dance score, underlining his ongoing debt to the work of John Cage. Leyya Mona Tawil is a very engaged Syrian-American based in New York and the director of Dance Elixir, among other things, and her dance could be seen as way of rearranging the world at some geopolitical label to put matters right. To indicate the seriousness of this ongoing task, Surak’s music is equally stern; the A side is presented as a grim teeming, drone, and just to take a bite out of any section of it is to inhale a faceful of toxic pollution. The B side is metallic and ambiguous, much like a stroll on the surface of the moon after a nuclear blast. 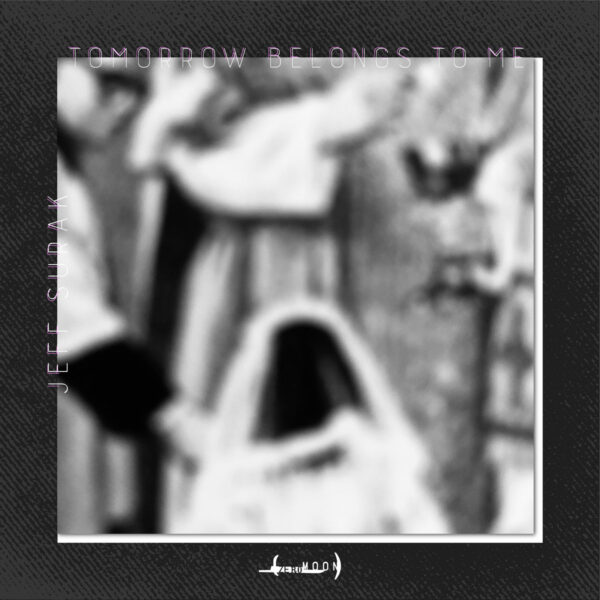 Jeff Surak again with Tomorrow Belongs To Me. This noisy monster can enter your home in CD form and arrives with an injunction that it must be played “loud without interruption”. This means you need to set aside at least an hour of your time to comply with this mandatory directive. The main event is a 30-minute bruiser called ‘Teaspoon of a Blackhole’, a pretty remorseless and single-minded assault that promises plenty chaos and fireworks. But it coheres, much like an alloy of metal junk and debris, by virtue of the steady pulsebeat provided by Surak’s wayward drum machines, one of the many tools used to realise this unstoppable vision of enjoyable mayhem. Unlike some all-out repello-noise makers who strive to suck in all the oxygen with their pummelling harshness, Surak still manages to make an approachable and even accessible racket, with plenty of physical handles and brass rings for those who are brave enough to jump on. After that black chugger, comes the mysterious beauty of ‘Kompot Kompromat’. Listen a dozen times and you’ll still never figure out how he’s wreaking these uncanny mutations, summoning an alien trumpet fugue from the distant past. Plus there’s still 15 mins of ‘Face Forward To Oblivion’ to those who still have an appetite for more pessimistic tones and bleak outlooks, bubbling like an evil oily swamp of black tar noise. Besides drum machines and electronic devices, the musician also used an electric toothbrush and a certain brand of European cigar in the realisation of this tape. As to the toothbrush, see above remark about the humidifier. Appliances have a mind of their own, and you need the willpower of a stern eagle to control them to do your bidding. Surak is that eagle. 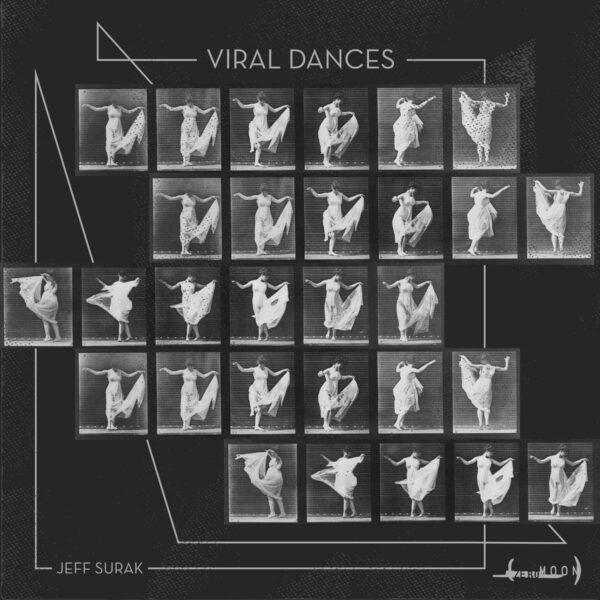 Jeff Surak also steps forward to claim responsibility for Viral Dances, four tracks which will effectively destroy some 20 minutes of your hard-earned free time. Note the Muybridge cover image (from Animal Locomotion) which hints at the joys of late Victorian romance and prancery, only to have these illusions shattered by the processed grind which is packed into this digital-only missive. Plus there’s the aggressive titles, such as ‘Front Line Weapon’, ‘The Comfort of Oppression’ and ‘Slugfinger’, which soon let you know we’re not signing up to a course of foxtrot lessons. This one exhibits Surak’s genius for beautiful-ugly music, more subdued than all-out noise, with rotted coruscated melodies lurking in among the distorted pools of filth and decay. All four of these are primo examples of how post-punk and industrial influences can be reboiled and rehashed in the seething mind of the artist. For those of you who intend to get their money’s worth and use this tape for dance practice, there are some lurching rhythms and odd disaffected patterns to which you could throw shapes, providing you use a 200 lb punching bag as your dance partner. ‘Slugfinger’ is the real pop tune here, with a sick guitar sound that causes one million New Order records to cash in their pension, but you might also like the cold dissonance of ‘Front Line Weapon’. Prepared instruments, including an electric guitar and a zither, plus electronics and tapes, were used in the preparation of these four steel bullets. 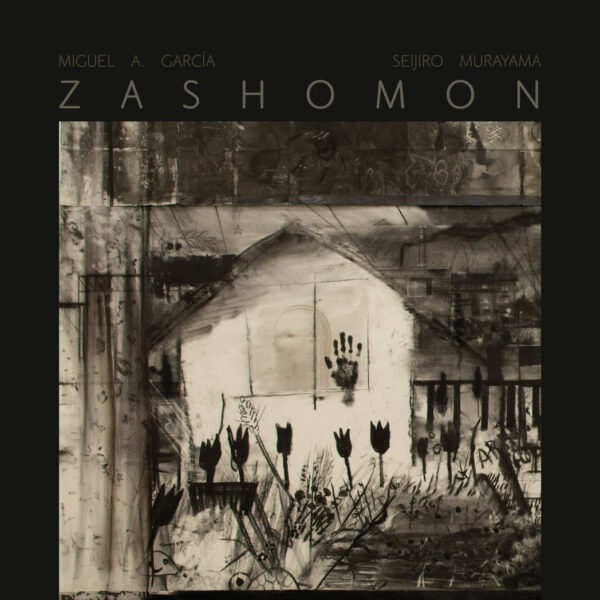 So much for solo Surak. On the Zashomon (ZERO 196) item, we have the team-up of Miguel A. Garcia and Seijiro Murayama, recorded we know not when. A strong meeting of tough-minded individuals from the Basque country and Japan, respectively. Actually I see we already reviewed this one in 2017, soon after it came out on the Italian Hybrida label. Since that label didn’t last for very long, and didn’t issue many copies of product either, it’s good to have this abrasive gloomer available again, now with new haunted house cover art. From a time when Garcia was still the prince of “brooding” electric drone, and this former KK Null drummer was capable of exhibiting great restraint and quietness, to generate much enjoyable tension and edgy noise. A state of permanent Halloween, macabre and mortifying. 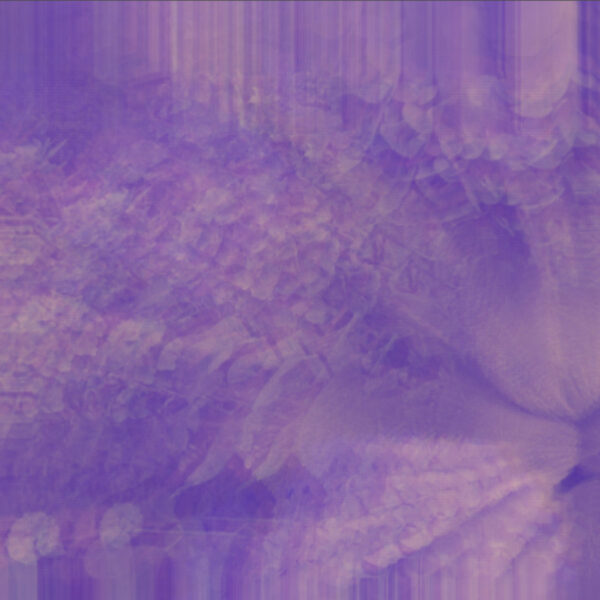 Excellent electronic music from Analog Tara on her Synthetic Fields (ZEROMOON ZERO 197) EP. Tara Rogers is an American composer who was educated at Mills College and McGill University, and besides composing her own work is also an historian of electronic music and a strong advocate for gender diversity in this field. She does work with synths and the SuperCollider program, and while I have no idea how today’s music was generated, it’s extremely accessible and a very satisfying listen. Contains everything from pleasing harmonic drone to melodic pop-tune material, all delivered with intelligence, charm, and great clarity of intent. Analog Tara exhibits great restraint in her choice of sounds and a real economy in their arrangement and delivery. Lovely item all round. 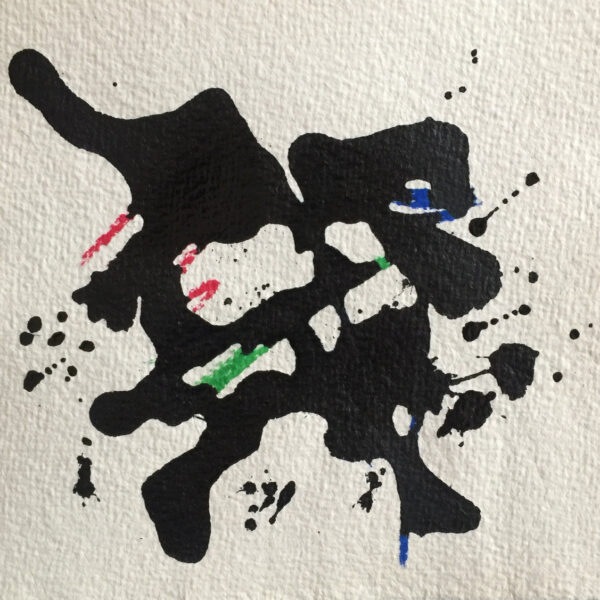 Viv Corringham UK improviser and sound artist has recently impressed many with her recent releases for Linear Obsessional (Until I Learn the Language of Vegetable Mineral) and Farpoint (On The Hour In The Woods). Both of those featured her own voice as a main element, and ditto for today’s item This Random Rhythm Of Notes and Sounds (ZERO 195). It’s worth stressing that she takes a very holistic view of her performance work, and walking in the open air and responding to the environment are as much a part of it all as the actual music she makes. Indeed it seems she composes her best work while going for a walk, drinking in a lungful of mountain air, and yapping out these vocal beauts. The technique here makes use of voice overdubs, sometimes processed with various apps and guitar pedals, tape loops, and added field recordings. Despite the title, I’d say there’s really not much that’s “random” about this; rather I like to think we’re hearing an audio analogue of the musician’s own soul, a psychic imprint of her inner being. A very distinctive set of songs, improvisations, and tape experiments. 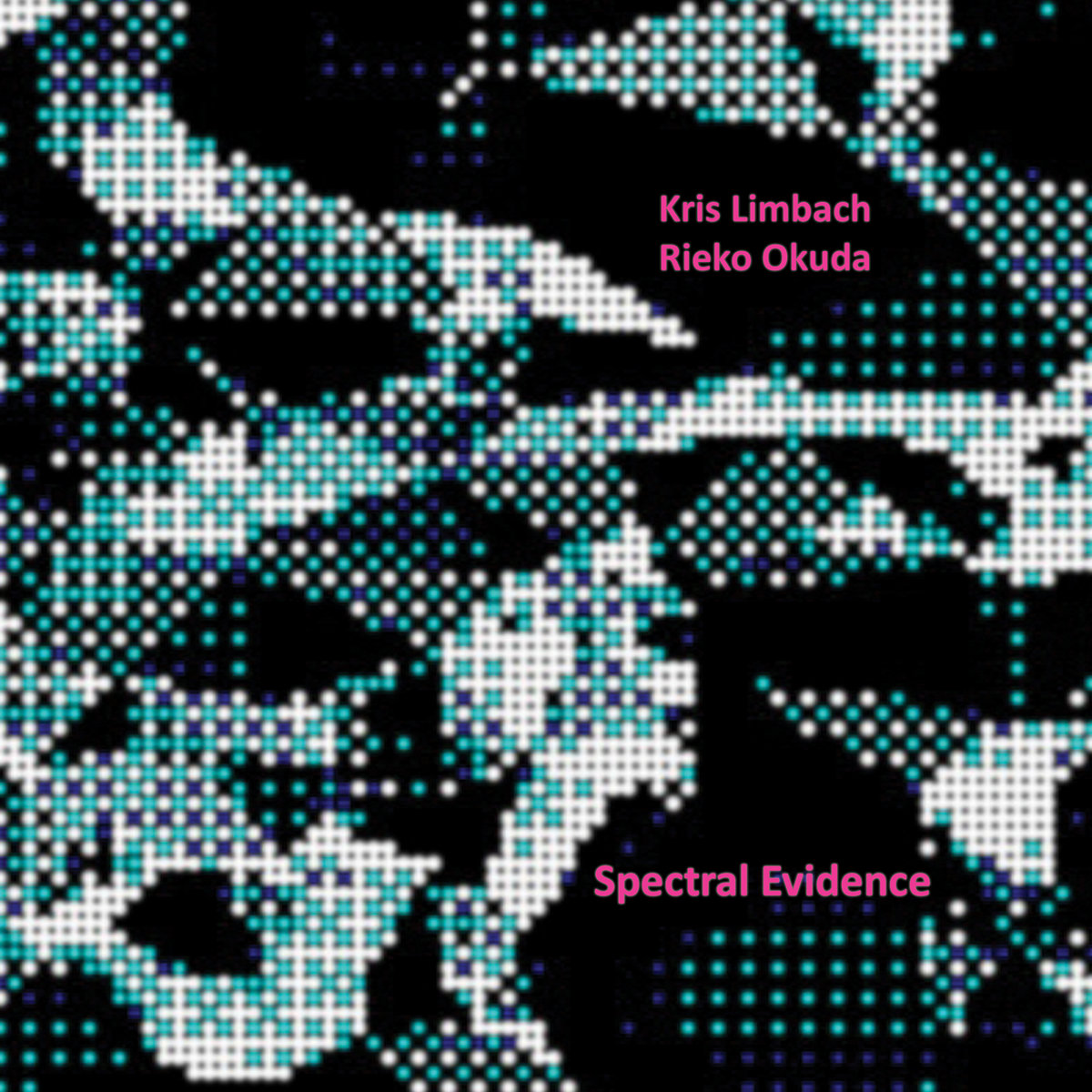 Spectral Evidence (ZERO 193) is a fabulacious piece of untamed, noisy, performance music. Slot this one into your toaster-cassette and you’ll be amazed that only two people are creating this enormous resonating vat of rattlement. Kris Limbach we know from the Emitter Micro label in Berlin. On that label, he’s been involved in some real puzzlers and heavy crunchers of abstract electronic blockery, none more puzzling than the two soundtrack LPs he did in 2018. Hell’s Bells is particularly odd, Spaghetti Western themes crossed with doom metal. He’s more of a cinema student than a sound artist anyway, so perhaps not surprising that he “plays” the Super-8 projector on this record, also credited with mics and tapes. The home movie projector is yet another domestic appliance (see above, re. humidifier, toothbrush) that can unhinge the mind of a scientist if used by the correct evil genius, mesmerising the brain with its motor and flashing light. The other half of the act is Rieko Okuda, who is doing for the amplified violin what Gummo Marx did for the laundry box. Her astounding performance is doubly surprising as this Japanese genius is mainly known for her classical piano work, though she is on record as having banged a sampler too. Hmm, I see Rieko also played on that Hell’s Bells record. Coincidence…or something more? All the tapes and CDs in this bundle are recommended, but this Spectral Evidence is really something special, exhibiting wild dynamics, incredible nuances of sound combinations, and an energised sympathy between the two players. It feels like they’re really working something out of their system, ejecting an unwanted revenant or unwelcome visitor. Will the exorcism succeed? Play this to find out. 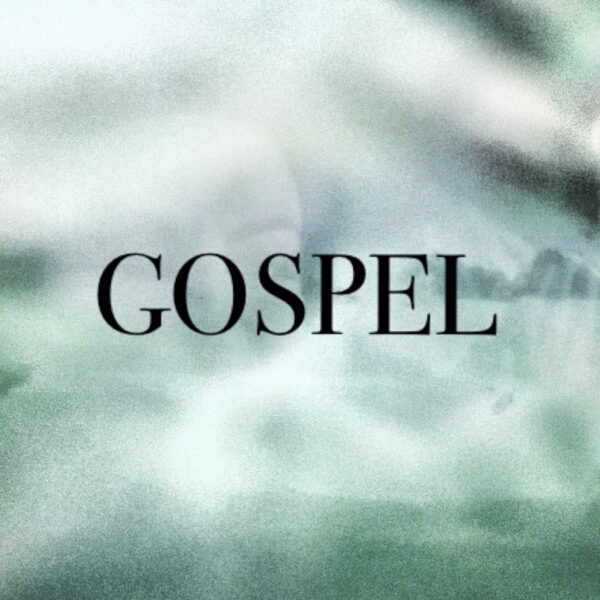 Gospel by Rinus van Alebeek is now in my leopard-like paws. Rinus runs the Staaltape cassette label in Europe as is well known, and we’ve tasted many a fine hand-made morsel from that table over the years since 2012. The connection is that Rinus and Surak sometimes play and tour together as Two Broke Girls – sorry, I mean Girls On Tape. Here are four short and highly baffling experiments of tape manipulation, many of them using speaking and singing voices as a prominent element in their collaged madness. I’m not even sure if this material has been released, but it was sent to our inner sanctum when the Girls On Tape tour was cancelled due to reasons of COVID. Could be that these four weird miniatures are intended to be used as part of a performance. But they work well on their own terms. If you want seven minutes of truly unsettling sound, spin Gospel whenever you can. Both achingly beautiful and slightly disturbing at some level, and not just because the human voice is being scrambled. I often feel van Alebeek is capable of probing those areas of the mind we’d much prefer to be left alone. More of the same on Real Love For Ever – four short tracks, more voice mangling, including loops, varispeed, and tiny collage edits for maximal surprise, plus some field recordings (including traffic sound). This one’s a bizarre travelogue, a surreal field report from the ambassador of Enigmatica sent to the Mayor of Riddleonia. 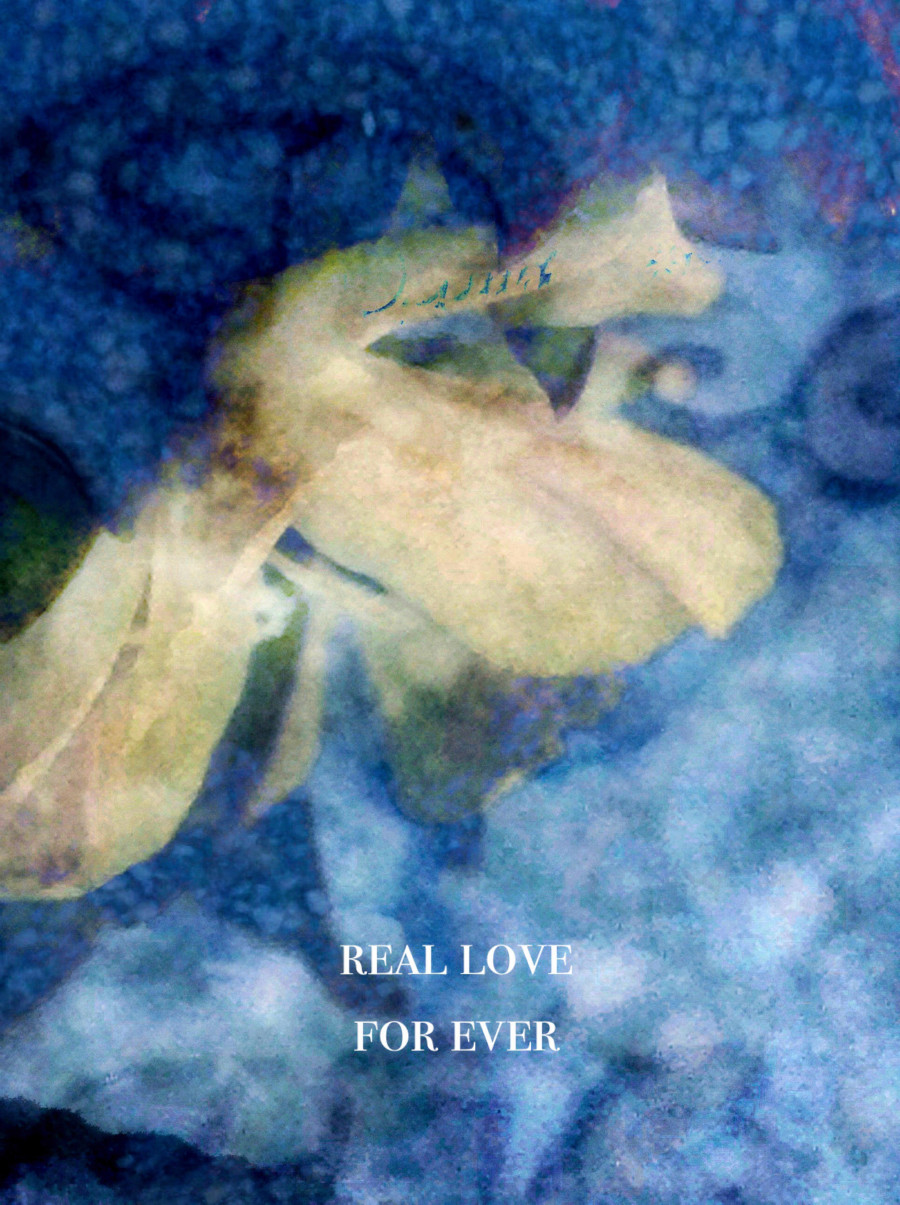 See a July 2020 radio show for excerpts from many of the above.