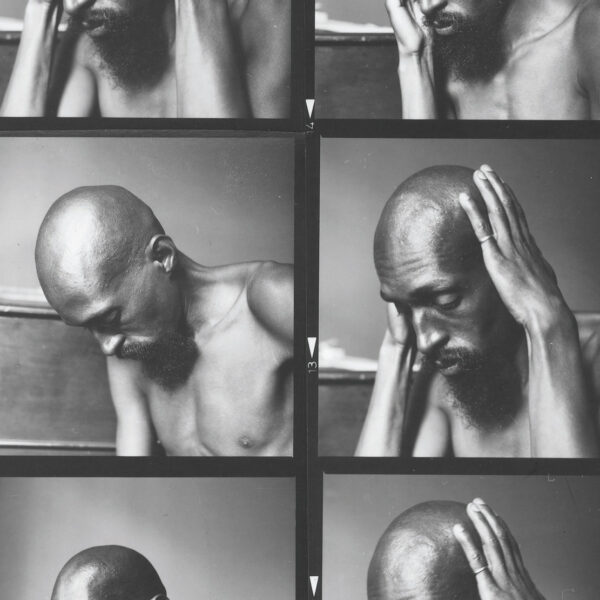 Recorded live by American pianist / singer / composer Julius Eastman himself on piano and the S.E.M. Ensemble, a chamber music group, at Composers Forum in Albany, The Arts Center on the Campus of the Academy of the Holy Names, Albany, New York, on 6 November 1974, this work is the only known live performance of Eastman’s “Femenine” opus made during the composer’s lifetime. Piano, woodwinds, stringed instruments, synthesiser, pitched percussion instruments such as vibraphone, and Eastman’s own invention (a machine that shook sleigh bells constantly when switched on) join in creating an airily graceful, light-filled and complex work of many moods and a questing spirit. “Femenine” is an early example of what Eastman (October 1940 – May 1990) called his “organic music” principle, in which each new section of music contains all the information from previous sections with some of that information being deliberately and gradually lost. The title Eastman gave to his work also is an early example of his humour, influenced by his confrontational politics that stemmed from his being both black and gay in a music scene where black musicians and gay musicians alike were rare.

Initially for the first half hour the performance seems to be warming up with a lot of repetition but gradually through that time, after deliberately staying in the background while the musicians find their feet individually and collectively, Eastman asserts control of his composition with emphatic piano melodies and notes that seem to act as guides and buoys for everyone else to follow. There is a lot of repetition of melody and rhythm pieces on particular instruments (the percussion instruments especially) which can sometimes be a bit wearying but they have a very light, even delicate touch and a mood of change and adventure is always present. Some of the melodies played on woodwinds seem a little like mediaeval folk and Renaissance-period tunes!

In the work’s second half (it’s about 72 minutes long) the flutes and piano work together in leading the rest of the orchestra in carving out a rich hypnotic soundscape of joy and merriment. The music escalates towards some goal high in the firmament on a radiant path. Even when Eastman cheekily decides to run down the piano on his left-hand side, creating a sonorous bass-heavy boom that will erupt again and again for the rest of the work’s duration, the other musicians are still levitating high above him and the audience with resonant droning tones, echoes and harmonic fun. Occasionally you can hear bum notes, and these actually increase in the last 20 minutes of the recording so some of these are deliberate – but even if they are not, they are still part of the overall context of musical exploration and improvisation, so nothing is ever really out of place.

In its dying moments the musicians gradually and gently come back down to Earth – with Eastman occasionally banging on the piano – with maybe a few protesting outliers creating a bit of racket. The joyful mood still remains even after Eastman has brought everyone back to the present day.

Unfortunately the joy and the harmony of “Femenine”, and the applause that follows after it ends, were in short supply during Eastman’s life: his politics, reflected in the titles he gave his most significant compositions including the one under review – other titles include “Joy Boy”, “Nigger Faggot”, “Dirty Nigger”, “Evil Nigger”, “Gay Guerilla” and “If You’re So Smart, Why Aren’t You Rich?” – antagonised his contemporaries in academia and experimental / improvised music with the result that opportunities for performance, collaborations, teaching and composing music dwindled. Eastman’s life fell apart in the 1980s when he became addicted to drugs and ended up homeless after being evicted from his apartment. His works were impounded by New York City authorities. He wound up in Buffalo where he died alone at the age of 49 years in Millard Fillmore Hospital from cardiac arrest; his obituary was announced by music critic and composer Kyle Gann in “The Village Voice” in January 1991, eight months after his death. Much of Eastman’s work remains lost but in the last few years interest in his music and its performance has grown and there is now an effort to restore, reconstruct and publish his music.