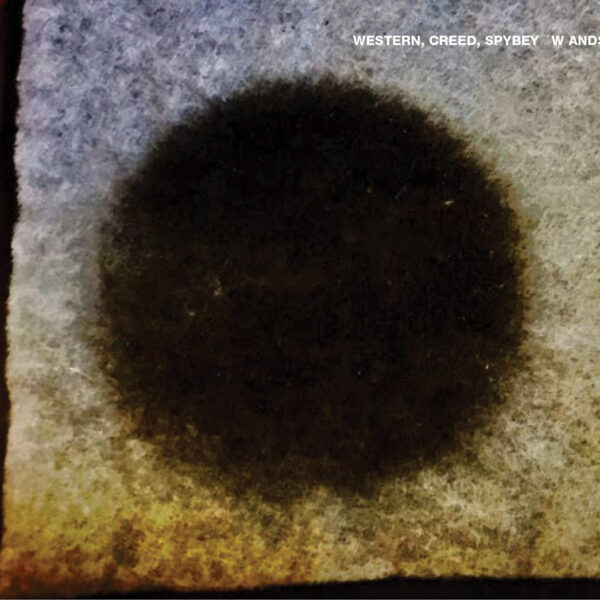 Good record of long-form, low-key analogue and acoustic drones from a strong trio of players on the album W Ands (COLD SPRING RECORDS CSR258). Those operating the old-school switchboards are Phil Western and Jesse Creed, while the admirable Mark Spybey overlaid his improvised performances on ethnic instruments and home made devices. He also edited the drones into the finished album we now hold.

Phil Western’s work is new to me, but I see this Canadian born fellow produced a string of electronic music in his own furrow starting in 1998 with The Escapist, to be followed by other items for The Record Company and Rustblade, when he wasn’t releasing his own file-based albums. Besides passing through society under numerous alias names, Mr Western also appeared in projects/bands Beehatch, Download, Floatpoint, Frozen Rabbit, Jakalope, Landhip, Off And Gone, and Plateau. Western died in Feb 2019 so this collaborative effort – assembled by passing materials back and forth between Vancouver and Yorkshire, I assume – is a posthumous release. I’m not sure if he and Jesse Creed, also called The Passenger, ever worked together as such but it seems they had a shared love for “vintage” synth gear of the sort that is rarely offered on eBay and sight of which causes many musicians to twitch their fingers compulsively. There’s even a list of such boxes on back of CD, identified mostly by brand names, and any roster which includes Roland, EMS, Korg and Oberheim is probably the equivalent of hallmarked silver to those in the know.

As to Spybey, he too has a long CV of project names, but I will mention Download (a semi-industrial thing with a member of Skinny Puppy), and Zoviet-France, of which he was a founding member; though I never really got on with their records, what little I have heard convinces me they were past masters of the “amnesiac” drone, by which I mean a blanked-out foggamaroo of toxic gas that could make you forget everything inside its virtual white-walled cells of ambient swaddling. There’s also Dead Voices On Air, a long-standing entity who we did note in 2012 with the album Michael And The Angels Fought. Spybey also played on that very good Solaris record with Richard Sanderson (teen krautrock fans in the 1970s who rejoined and made good).

Today’s record W Ands uses the names of tarot cards as track titles, and subtitles that are probably apt to fall from a fortune-teller’s lips as they turn the pasteboards, e.g. “Others will recognise your achievements”. However, that’s about as far as we delve into the supernatural or the occult with this record, unless you count the general spookoid atmosphere that is usually summoned by 99% of these noir-ambient records. The piece that made the most impression on me was ‘Two Of Wands’, not just because it’s a lengthy 20:17 meditation, but because the soundworld here is unusual and imaginative, and it’s less outright droney with its short repeated passages and phrases. ‘Five Of Wands’ also enjoyable, has evocative yearning emotions buried within its layered monotones. Label press release wishes to persuade us that music here has the power to transport the soul in some way; there is talk of “going beyond the ordinary everyday experience”, where the ego might dissolve away and even the framework of time itself ceases to be of any importance. From 5th August 2020.