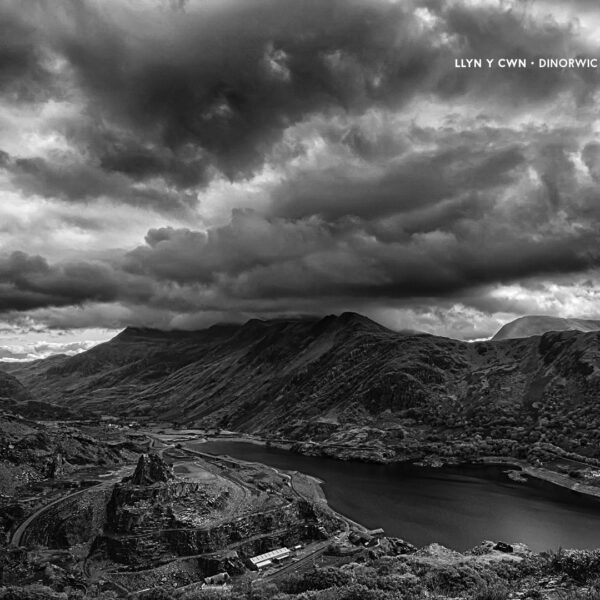 The setting for this one is the Victorian slate mine Dinorwic in North Wales, a quarry which was apparently one of the largest of its kind in the world and once produced 100,00 tons of Welsh slate per year; it’s now closed, and forms part of the national park and Welsh National slate museum. I mention this as the Dinorwic quarry could be regarded as another example of historic industry practice that has left behind a somewhat desolate zone, one of those zones which continue to have an uncanny appeal to many field recording types, phonographers, and sound artists. However, this record isn’t aiming to give the reader a history lesson. Benjamin Ian Powell (who is Llyn Y Cwn) captured his field recordings in this environment, then presumably blended them with ambient drones in the studio to create this very specific form of sound art; the intention is mainly to convey the grandeur of the landscape, as he did when we last heard him on Twll Du. However, certain echoes of the industrial past do make their way into the fabric of the piece, in particular the wind whistling around air shafts which might reveal something of the nature of the hydroelectric power station that once used to operate at Dinorwic. Air, wind, and light are somehow “audible” in the work, and it’s not simply a thickened digital morass of moody droning.

To the two main elements, field recordings and (very subtle) ambient drone, must be added a third: the photographs on the cover, a six-panel digipak which unfolds to reveal panoramic photos of the area taken by Llyn Y Cwn. I think these images have been carefully treated, like the music, as they exude a slightly lurid brown tinge in the finished print, and the depth of field and focus has more stark clarity than ought to be possible, especially given the twilight vibe these vivid images project, almost as though they were photographed at dusk. They almost seem to be etched in slate themselves – hard edges, deep blacks. If the photos represent a long-exposure “deep stare” at the site, then the record represents that same stare expressed in aural form.

Once again Llyn Y Cwn succeeds in communicating much about the geography of the area he knows so well, and although very site-specific and rooted to the physical space, the record also reserves the right to maintain a certain closed-lipped, stern aspect, declining to comment or editorialise, and letting the landscape speak for itself. From 5th August 2020.