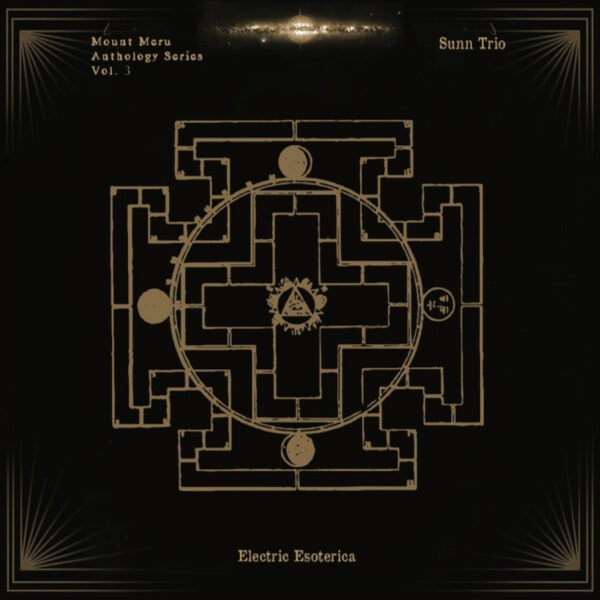 Strong set of psychedelic free-noise-guitar punkish improvised avant-rock with added Middle Eastern elements from Sunn Trio on Electric Esoterica (TWENTY ONE EIGHTY TWO RECORDING COMPANY KHZ 1003LP) …this combo from Arizona are entirely new to me but have been active since 2015 at least starting with their Radiowaves album and carrying on with subsequent releases for Sky Lantern Records.

Their name may have led you to expect some sort of connection to Sunn O))), but there is none; is anything, Joel Robinson and his crew draw some of their inspiration from the same well as Sun City Girls, and indeed there is a connection if you include the Alternative Particle Choir (of which Alan Bishop is a member) and the Mount Meru Anthology – a publishing strategy that also draws in Richard Bishop and Charles Gocher. Membership of Sunn Trio is perhaps a bit hard to pin down – they are one of those combos who like a fluid arrangement, and have sometimes had ten members on stage or present in the room for a bout with the recording engineer, but at time of writing they are a trio – Paul Borman on bass, Andrew Flores doing drums and exotic percussion, and lead guitarist Joel Robinson who also plays the oud, and adds field recordings, shortwave radios, and more percussion to the general Moroccan stew. Having said that, the trio is augmented on this record by Sam Plattner with his computers, field recordings, and more percussion (he also mixed the record).

The band have a fast mode and a slow mode – the former of these has the most immediate appeal, and the lively psych-drenched instrumental freakouts of the trio are just the thing to turn to when your Sun City Girls LPs have worn out. Robinson’s crazed guitar style is packed with non-Western intervals, the hocketing rhythms are exactly like taking a ride on a grumpy camel, and the recordings are deliberately layered and treated to provide mouthfuls of earthy spice with every bite. The latter, slow mode however might just be more original and intriguing to those of a mystery-seeking bent. Short, puzzling interludes of sonic construction they be, some less than three mins in length, and without any discernible melody or tune-like form to help orient us, as we are dragged into some remote corner of an Eastern bazaar to taste forbidden fruits and potentially lethal doses of hashish.

Besides delivering all of these very convincing ethnic flavours and modes, the record has a political dimension (if the press notes are to be believed), with references to recent wars, disasters and military atrocities – Iraq, Syria, Afghanistan and the Arab Spring are all name-checked. The music of Sunn Trio represents an attempt to build bridges, make reparations, reach out to people of other nations, hence the slogan “urgent music for urgent times”. Encouraging to note Mark Gergis (of Mono Pause and Sublime Frequencies) is here for mastering duties too. Exciting and energising music, and lovely sleeve design too. Arrived 17th June 2020.