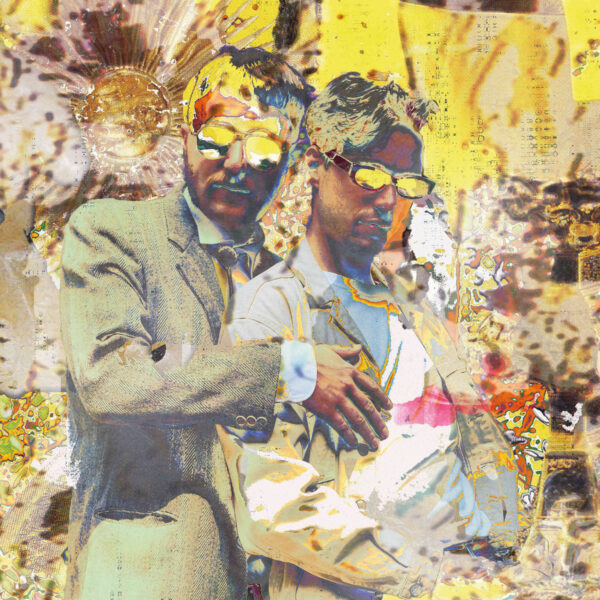 Its English-language translation being “The Grand Prize”, this full-length debut from Berlin duo Neuzeitliche Bodenbeläge (Niklas Wandt and Joshua Gottmanns) is a lush and polished work of synthpop and digital dub that at times harks back to the glory days of the 1980s and 1990s when advances in synthesiser and music recording technologies quickly hit the nightclubs and helped spawn a myriad electronic dance music genres around the planet. With the emphasis on minimally presented songs where German-language lyrics dominate over looping synth beats and the production imparts a faint edge of reverb on the music so it has a slight dark edge, “Der Grosse Preis” does come with a frisson of retro techno / acid house edginess. Faint echoes of the German New Wave that for a brief time in the 1980s was the cynosure of the global pop music scene appear in some songs though of course an entire generation of young clubbers that has grown up since then may not care. Though I must say Wandt and Gottmanns don’t set out to be anything like DAF or other bands in the German New Wave that imbibed influences from punk and the various ideologies and manifestos that were attached or associated with it: the album plays like a soundtrack to a futuristic technocratic society obsessed with wealth, glamour, sensualism, the cult of celebrity, material acquisition and the shallow values and the transactions, illegal as well as legal, associated with it.

From minimal melodic synthpop ditties reminiscent of mid-1970s Kraftwerk on the title track and follow-up song “Gelb’s Groove”, to more pop-friendly, toe-tapping pieces (with some psychedelic or dark ambient tendencies) coming later, the duo deliver work that can be seductive yet at times precise, even refined, and travelling on an even emotional keel as demonstrated by the mostly calm vocals. Even at their shoutiest, the vocals always seem to be under control. The music veers close to rather ordinary dance beats on “Keramik & Konflikte”, an undistinguished track where the melodies sound as if they’ve been pilfered from other people’s music and the beats are clunky. As the album continues, more catchy pop songs appear with perhaps brief glimpses into music genres that might suggest Wandt and Gottmanns could be more than a German-language minimalist synthpop answer to The Pet Shop Boys (who at least wrote insightful songs about social conditions in 1980s Britain) if they were ambitious enough.

“Der Grosse Preis” is a very pleasant work with a light and deft touch. I wonder though, in the current pandemic age, that it might be seen as a bit frivolous and no longer relevant to current conditions in Europe and elsewhere that its target audiences find themselves in.